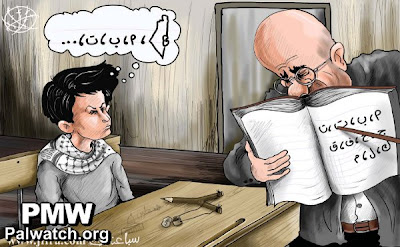 After fifteen years of following the Palestinian Authority (PA) media on a daily basis, I've never seen anything that sums up the problem of why there's no peace better than this cartoon in al-Hayat al-Jadida, the official PA newspaper. If only the Western mass media ran this cartoon the situation would be crystal-clear and nobody would have any doubt who is blocking a peaceful, two-state resolution of the conflict.

In the cartoon, a young boy is being instructed in the Arabic alphabet by the teacher. But even before he starts with the letters, the very basis of his world view and knowledge is presented (in his thought balloon) as this: All of Israel must be replaced by Palestine. See the map on the right side of the balloon, remembering Arabic is read from right to left. This goal is presented as the foundation stone, the guiding light, the very basis of Palestinian thought and identity.

Nor is that all. On the desk, his pen has become a slingshot (symbolizing that violent struggle trumps education) with stones.

Not exactly: Hey kids! Stay in school, get a good education, help build a peaceful, prosperous Palestine living as a neighbor to Israel!

Remember, too, this is a PA newspaper. If "President" Mahmoud Abbas wanted to do so, which he doesn't, he could pick up the phone and tell the editor to stop it. We aren't talking about a broad spectrum of permissible belief or free competition of ideas here. Everything in the newspaper is what the PA wants to convey, indeed indoctrinate, its subjects and supporters to believe.

This context also explains why unilaterally declaring a state, rather than getting one through a negotiated agreement, is so attractive for the PA, allowing it to have its state and eat Israel, too. No negotiations, concessions, obligations, commitment to end the conflict, or to accept Israel's existence would be needed. Meanwhile, the next generation is being prepared what might be called--to borrow a Star Wars title--Episode 2: Return of the Jihadi.

How can a Palestinian government, media, and educational system that presents the struggle to wipe Israel off the map as the most fundamental principle of existence, the touchstone of national identity, possibly make peace with Israel? How could leaders, even if they wanted to do so, persuade their people to compromise when they have been brought up on ideas like this?

The situation is not one of Palestinians--at least in terms of public life, politics, and society--desperately yearning for a state of their own, a higher standard of living, the end of "occupation," a better life for their children, and the dismantlement of Jewish settlements. In reality, the situation is of Palestinians being taught, told, and led to believe that the only worth goal is one of total victory.

In this context, peace is betrayal, compromise is cowardice, a treason to be punished by dishonor or death. Turning kids into cannon fodder is the top priority, not only for Hamas but even for the PA.

One picture is worth a thousand martyrs.

Here's another example of the kind of people the PA admires as heroes--terrorists who attacked Israeli civilians. And here are more examples of claiming all of Israel as official policy. And PA television programming presenting Tel Aviv as a settlement.

And this is what happens when a woman in Ramallah writes questioning whether violence helps the Palestinians and opposing Islamization. The Palestinian reporter asks her: "You declared yourself a Palestinian. Many, however, view the things you write as offensive and hostile to Islam. What makes people question your Palestinian identity and accuse you of being hostile to Islam?"

In other words, if you don't want Hamas, prefer a more secular society, and want a two-state solution, how can you call yourself a Palestinian or Muslim at all?

Copyright - Original materials copyright (c) by the authors.
Posted by Sally Zahav at 8:37 AM