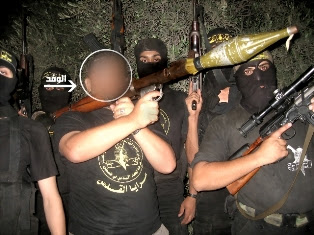 The New York Times--you know, it's sort of like National Public Radio but with printed letters on murdered trees--keeps saying it can't find any connections between IHH, the Turkish Islamist group that organized the Gaza flotilla, and terrorism. From time to time, I've published helpful hints to assist them in making these linkages. But, alas, they don't quite seem to get the picture.

Picture! Hey, that's an idea!
Ok so here's a picture (click the link for about 20 more) of peace-loving IHH activists visiting their good friends, the radical--even by comparison with Hamas!--terrorist group Islamic Jihad and trying out some of its humanitarian equipment.

The goal might be to give the IHH a better feel for what it needs to include in future "humanitarian" deliveries to the Gaza Strip. Indeed, if the IHH and its many allies succeed in getting rid of the sanctions on Gaza altogether, they could bring these things in directly on "peace activist" ships.

Note the snappy black tee-shirt worn by the IHH activist, a map including all of Israel transformed into the Islamic Republic of Palestine.
So perhaps the Times and the rest of the media that doesn't understand will reconsider what was behind that flotilla and the ensuing propaganda barrage that led the U.S. government to change its entire policy toward Gaza.

For more information on the IHH's Viva Palestina convoy and its fun time frolicking with terrorist buddies, see here. And for more evidence of IHH's past terrorist connections, see here, here, here, here, and here, and also here ... Well, you get the picture, so why doesn't the Times and so many others?
But then again "There are none so blind as those who will not see. The most deluded people are those who choose to ignore what they already know." John Heywood, 1546.
Barry Rubin is director of the Global Research in International Affairs (GLORIA) Center and editor of the Middle East Review of International Affairs (MERIA) Journal. His latest books are The Israel-Arab Reader (seventh edition), The Long War for Freedom: The Arab Struggle for Democracy in the Middle East (Wiley), and The Truth About Syria (Palgrave-Macmillan).
Copyright - Original materials copyright (c) by the authors.
Posted by Sally Zahav at 7:31 AM