Sending a drone into Israeli air space is meant to remind the Lebanese public that Hezbollah is still defined by its jihad against Israel and not by its large-scale and bloody involvement in the Syrian civil war. 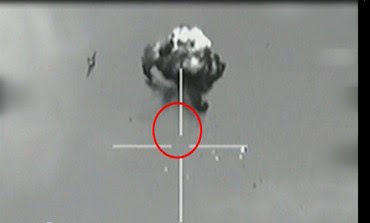 IAF shoots down UAV that entered Israeli airspace
Photo: IDF Spokesman's Office
Hezbollah’s attempt – likely Iranian-backed – to fly a drone into Israeli air space on Thursday is a dangerous publicity stunt designed to distract attention from its large-scale and bloody involvement in the Syrian civil war.

As the Shi’ite terror organization sends more and more fighters to kill Sunni Syrian rebels, and to try and save the regime of Bashar Assad, it is struggling to justify its involvement to Sunni Lebanese, who are growing increasingly outraged and are openly challenging Hezbollah’s role in their country and the region. Sending a drone into Israeli air space is meant to remind the Lebanese public that Hezbollah is still defined by its jihad against Israel.

Despite being an exercise in PR, the drone incident remains a serious provocation – an attempted breach of Israeli air space near Haifa, home to sensitive petrochemical plants that Hassan Nasrallah has threatened to target.

The air force’s swift reaction represents a significant improvement from the October drone infiltration, when Hezbollah managed to fly a drone deep into Israeli territory, before it was shot down. The lessons of last year’s incident have been learned well, judging by the early detection and interception of the hostile craft on Thursday.

The navy will now begin the tedious task of hunting for the drone’s pieces in the Mediterranean Sea, and the IDF will seek to answer questions such as: What type of drone was involved? Did it managed to record video footage, and could it transmit any of that footage to a base station in Lebanon in real time? The drone is only the most recent and visible aspect of a covert war raging between Iran and Hezbollah on one side, and Israel on the other.

Further away, Iran’s nuclear centrifuges continue to spin. All of these arenas – Lebanon, Syria, Iran (and Gaza) are interlinked.

These are tense times, and any miscalculated step can trigger a wider confrontation.