Anarchy in Sinai and no Solution in Sight

Analysis: Mubarak’s fall and the subsequent decline of the central authority have only made matters worse in Sinai. 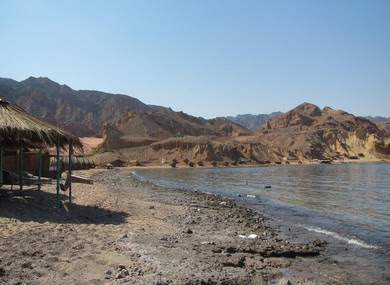 Love affair with Sinai unabated Photo: Linda Epstein
The first Egyptian reactions to the grad rockets that targeted Eilat were of flat denial. No fewer than three individuals – a self-proclaimed expert, a retired general and a military commentator – explained at length that there was no way the missiles had been launched from Sinai.

One said that determining what had happened would take time and would require satellite images; another argued that the Iron Dome system, recently deployed to the Eilat area, is designed to intercept only projectiles launched from beyond Israel’s borders — the rockets must have been launched from Israeli territory, he duly concluded. South Sinai’s governor joined the chorus, rejecting out of hand the notion that the rockets could have been shot from the peninsula.

It may be remembered that in December 2010, this governor’s predecessor accused the Mossad of dispatching a shark to the waters of Sharm e-Sheikh in order to harm local tourism. A “high ranking army source wishing to remain anonymous” added that the ongoing investigation had found no indication that the missiles had originated in Egypt.

A few hours later, perspectives Egyptian views were shifting, perhaps because a Salafi group had taken responsibility for the launch.

An Egyptian Army spokesman posted a statement on its Facebook page indicating that a commission of inquiry had been immediately set up to check the situation on the ground in Sinai.

In the statement, the spokesman wrote that Egyptian territory had never been and would never be a threat to neighboring countries.

The presidency followed suit with a similar communiqué, while another military source indicated that the Egyptian Defense Minister General Abdel Fattah Alsisi had given orders to raise the state of alert along the Israeli border to its maximum level.

No one seemed aware that Iron Dome radars and other installations had tracked the missiles, and that the likely explanation for the decision not to fire at them was that such an interception would have taken place in Egyptian airspace.

At this stage, Israel is unwilling to violate its neighbor’s sovereignty. In Egypt, as in all Arab countries, denial is the name of the game whenever Israel is involved. They are never the ones at fault, it seems; it is always the Zionists or the Jews.

This reality does not make the necessary security cooperation between Israel and Egypt any easier – even when Egyptian personnel are at risk – despite being in both countries’ best interests.

They must join forces to fight the spread of Jihadi terror in the Sinai Peninsula and in Gaza, a trend which presents a serious threat not just to Israel but also to Egypt. This is not to say that there is no exchange of information — what happens after Israel has passed sensitive material to Egypt, however, is anybody’s guess.

Back in August, Israel warned the former head of Egyptian security that Islamist militants were planning to attack an army post, but he refused to take action, and 16 Egyptian soldiers were slaughtered. He was sacked.

Conversely, deploying the Iron Dome to Eilat 10 days ago may well have been the result of information received about a plot to fire rockets, but if this was the case, there is no indication that the Egyptians did anything at their end to prevent the rocket fire.

Sinai is for all intents and purposes a war zone. The traditional distrust felt by the peninsula’s Beduin towards the central government has only been exacerbated by years of neglect. Nothing has been done to improve the lot of the population; there are no workplaces, there is no meaningful development and not even a decent school infrastructure.

Hamas found a willing ally in the Beduin – ready to transport arms and ammunition, rockets included.

Much of this contraband originates from Iran, traveling through Sudan and mainland Egypt to Sinai and to the Gaza Strip.

Other Jihadi terror organizations loosely linked to al-Qaida have followed suit, setting up local cells and paying Beduin handsomely for their assistance.

Mubarak’s fall and the subsequent decline of the central authority have only made matters worse in Sinai.

Concurrent with his removal from power, security forces left the area, turning Sinai into a drug-smuggling haven as well as a major artery for Africans seeking a new life in Israel.

With the fall of Gaddafi, Libyan munitions joined the flow. And still nothing has been done to develop the peninsula and improve conditions for its inhabitants.

Last October the government took steps to allow the purchase and rental of land by Beduin who could demonstrate Egyptian citizenship for themselves and their parents and that they did not hold a second nationality. The ink on that piece of legislation was barely dry when the defense minister issued a decree forbidding the purchase of land on a strip 5 kilometers deep along Egypt’s border with Israel and with Gaza.

This was done in order to exercise better control of the area, prevent terrorist infiltration and supervise the tunnels moving contraband to Gaza.

The Beduin were bitterly disappointed: They demanded that the decree be rescinded and threatened civil disobedience. Intense negotiations are ongoing, but so far no solution has been found, and violence could break out at any moment.

There is yet another conflict brewing in Sinai, this one between the Beduin and the Muslim Brothers.

The former supreme guide of the Brotherhood, Muhammad Mehdi Akef, told the Kuwait daily Al Jarida last week that all Beduin are collaborators: One third collaborate with state security services, another with army intelligence, and the final third spies for Israel. (He did not mention collaboration with Jihadist and Hamas groups).

Hundreds of angry Beduin demonstrated in front of Brotherhood headquarters in Sinai, threatening to turn it to rubble unless Akef apologized.

More demonstrations, as well as a civil suit for slander, are planned.

It can hardly be expected that Beduin will help the central government fight terror, considering so many of them earn their livelihoods by smuggling drugs, people or arms on behalf of those terror groups.

What then is Israel to do? Thousands of armed terrorists in dozens of groups operating in the peninsula are openly threatening Israel’s security, and yet it is greatly limited in the measures it can adopt against them.

There is indeed a measure of intelligence- sharing between the Israel and her southern neighbor, but without increased levels of cooperation — similar to those during the Mubarak years — such efforts will remain ineffective.

A few months ago the Egyptian army announced it was launching an all-out campaign against terror in Sinai.

Yet terrorists continue to operate in broad daylight, attacking police stations, setting up road blocks and targeting army patrols. Last week one policeman was killed and another injured by terrorists or smugglers.

Egyptian president Mohamed Morsi has no meaningful contact with Prime Minister Binyamin Netanyahu. The Brothers do not speak with Israel. Only last week, in an interview with Al Jazeera Arabic, Morsi couldn’t even bring himself to utter Israel’s name, saying of the limited contact Egypt and Israel do maintain that “even enemies occasionally speak.”

Only close cooperation on both sides of the border will put an end to the state of lawlessness in the peninsula, but with the Muslim Brothers at Egypt’s helm, it does not look like this will happen anytime soon.

Zvi Mazel is a former ambassador to Egypt.