"The opposition was told in clear terms that action to deter further use of chemical weapons by Assad regime could come as early as next few days," sources who attend meeting between envoys, Syrian National Coalition say. 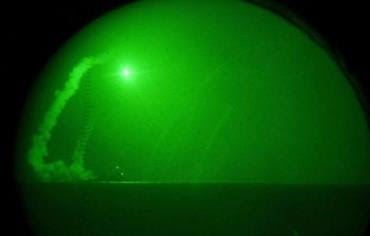 US destroyer fires Tomahawk cruise missile in Mediterranean
[file] Photo: REUTERS
AMMAN/BEIRUT/BANDAR SERI BEGAWAN/WASHINGTON - Western powers told the Syrian opposition to expect a strike against President Bashar Assad's forces within days, according to sources who attended a meeting between envoys and the Syrian National Coalition in Istanbul.

"The opposition was told in clear terms that action to deter further use of chemical weapons by the Assad regime could come as early as in the next few days, and that they should still prepare for peace talks at Geneva," one of the sources who was at the meeting on Monday told Reuters.

The meeting at a hotel in downtown Istanbul was between senior figures of the Syrian National Coalition, including its president Ahmad Jarba, and envoys from 11 core "Friends of Syria" alliance members, that included US envoy Robert Ford, the top US official handling the Syria file, the sources said.

Another source said Ford told Jarba at the gathering that the coalition should "expect appropriate action to deter more use of chemical weapons".

Jarba offered the 11 nations represented in the Friends of Syria core group a list of 10 proposed targets.

They included the Mezze Military Airport on the western outskirts of Damascus, the Qutaifa missile base north of the city and compounds of the Fourth Mechanised Division, a elite unit headed by Assad's feared brother Maher and composed mainly of members of his Alawite minority sect.

No order has been issued by US President Barack Obama, but his national security team has been told to operate under the assumption that he will move forward with the strike.

US Defense Secretary Chuck Hagel said in a television interview with the BBC on Tuesday that the US military is ready to act immediately should President Obama order action against Syria over a chemical weapons attack.

"We have moved assets in place to be able to fulfill and comply with whatever option the president wishes to take," Hagel said during a trip to Brunei, according to a partial transcript provided by the BBC.

Asked if the US military was ready to respond just "like that," Hagel said: "We are ready to go, like that."

US allies were drafting plans for air strikes and other military action against Syria on Tuesday, as Assad's enemies vowed to punish a poison gas attack that Washington called a "moral obscenity".

Facing Russian and Chinese disapproval that will complicate hopes for a united front backed by international law, and keen to win over wary voters at home, Western leaders seem in no rush to pull the trigger. British Prime Minister David Cameron called parliament back from recess for a session on Syria on Thursday.

Cameron may push for a strike before that vote. During the allied campaign against Libya's Colonel Muammar Gaddafi in 2011, Parliament did not address UK involvement until three days after the assault had already begun.

Western allies will likely coordinate the attack to avoid launching a new military campaign in the Middle East on Islam's day of prayer, jumu'ah, on Friday.

Therefore, if the attack is to last several days, it could begin on Saturday or, alternatively, within the next 24 hours.

UN experts trying to establish what killed hundreds of civilians in rebel-held suburbs of Damascus last Wednesday were finally able to cross the frontline on Monday to see survivors - despite being shot at in government-held territory. But they put off a second visit until Wednesday.

However, US officials said Obama already had little doubt Assad's forces were to blame. Turkey, Syria's neighbor and part of the US-led NATO military pact, called it a "crime against humanity" that demanded international reaction.

France said it is "on board" with taking action without unanimous support from the United Nations Security Council.

Ahead of the strike, Obama will first declassify an intelligence report put together by his national security team at his request, proving incontrovertibly that chemical weapons were used by Assad against his own people on a massive scale on August 21 in the Damascus suburb of Ghouta.

That report will be presented as both the moral and legal basis for action.

"This is about the large-scale, indiscriminate use of weapons that the civilized world, long ago, decided must never be used at all," Secretary of State John Kerry said on Monday.

The secretary's comments were intended to lay the groundwork for the moral case for intervention, a US official told the Jerusalem Post.

The Syrian government, which denies using gas, said it would press on with its offensive against rebels around the capital. Foreign Minister Walid Moualem said US strikes would help al-Qaida allies but called Western leaders "delusional" if they hoped to aid the rebels to create a balance of power in Syria.

In Britain, whose forces have supported the US military in a succession of wars, Cameron called for an appropriate level of retribution for using chemical weapons.

"Our forces are making contingency plans," a spokesman for Cameron told reporters. London and its allies would make a "proportionate response" to the "utterly abhorrent" attack.

Top generals from the United States and European and Middle Eastern allies met in Jordan for what could be a council of war.

"The Americans are tying any military action to the chemical weapons issue. But the message is clear; they expect the strike to be strong enough to force Assad to go to Geneva and accept a transitional government with full authority," a Syrian opposition figure said.

Jarba said this month the coalition welcomed participating in Geneva without conditions, but it still expected the meeting to result in a transition that would remove Assad and his top aides from power.