Espen Barth Eide praises Israel for taking ‘difficult’ step of releasing prisoners, says PA must also make concessions; if progress is not made, donations will dry up. 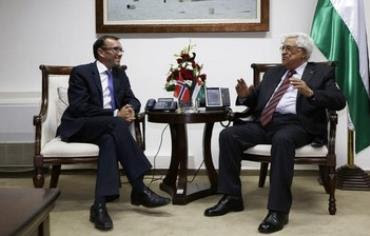 Both the Palestinians and Israel should know that the world will not bankroll Palestinian Authority state-building forever, and that if progress is not made the donations will stop, Norway’s Foreign Minister Espen Barth Eide told The Jerusalem Post Tuesday.

“The donors will not be ready to keep funding Palestinian state-building much longer if we are not seeing a political horizon,” said Eide.

Norway heads the Ad Hoc Liaison Committee, which is the international group of donors scheduled to meet next month in New York on the sidelines of the UN General Assembly meeting.

Eide said it was important for both sides to know – as they have just restarted negotiations – that the world was not willing to provide a blank check.

“I think this is important for the Palestinians to know, because if anyone there thought they could sort of just fall back to the comfort of an internationally subsidized state-building endeavor, that may be wrong,” he said in an interview. “And I think that it is important for some people on the Israeli side – living in reasonable comfort [given] that cooperation with the pseudo-state in the West Bank is quite good – to know that this cannot continue forever.”

Eide, who stated he was no starry-eyed optimist when it comes to the Middle East peace process, said he was “somewhat more encouraged” about the prospects of successful negotiations than he was before he arrived for two days of meetings on Monday.

“There are two basic reasons for my relative optimism this time compared to previous rounds,” he said.

One was his sense, after speaking to leaders on both sides, that Ramallah and Jerusalem both understood that “this might be the last opportunity for a two-state solution according to the Oslo paradigm.”

If this round fails, he said, “there will probably not be another round and something else will happen.... I think we are at the point where we will either move ahead or backward to a very different situation.”

Eide said that the second reason for his optimism had to do with the “dramatic events everywhere in the region, from Egypt to Syria, Lebanon and the apocalyptic terror we are seeing all around.”

Then, without pointing out the irony, he said that when looking at a map of the Middle East, “there are two small points of land that are more peaceful” – Israel and the West Bank.

“If the Israeli and Palestinian leaders look beyond their practical difficulties at the strategic picture, I think they have one point in common – they are on the same side when it comes to the big picture on Iran, Syria and the Muslim Brotherhood. Both Ramallah and Jerusalem want to reduce the influence of these actors.”

One of the ways to reduce outside influence is to “try and get the classical conflict into a more positive phase,” he said.

Having said that, Eide acknowledged that “there is a long list of problems that we all know; there are a lot of concessions to make.”

The Norwegian foreign minister said he had been misquoted by his country’s press before his arrival as saying that Israel’s release of Palestinian terrorists was not “an especially big sacrifice.”

He stressed to the Post that he believed the exact opposite – that the release of 26 terrorists was a “very important and very difficult concession which I know was hard to make.”

Then, saying something that European leaders do not often articulate, he added: “I also think that the Palestinians must now be ready to make some concessions, first and foremost on contributing a sense of security for the people of Israel.”

Eide spoke to the Post after visiting Gaza, where he stressed he did not meet anyone from Hamas.

The foreign minister said the rapid changes in Egypt that led to the overthrow of the Muslim Brotherhood’s deposed president, Mohamed Morsi, had clearly weakened Hamas to the benefit of the Palestinian Authority.

“A year ago we feared that the center of gravity was slowly moving from the West Bank to Gaza. Now it is clearly back in the West Bank, where it should be,” he said, adding that this was another reason to move purposefully now in the negotiations.

Eide said there was “deep frustration” in Gaza, as the living conditions there – following the developments in Egypt – had gotten worse.

“Until a few months ago they did get some goods through the tunnels and over Rafah, and now they are not getting that,” he said. “While I do recognize that there [is a] certain improvement when it comes to Israeli policy [regarding goods allowed in], there is still a long way to go to compensate what they lost from Egypt.”

With prices going up, problems of garbage collection, sewage and a lack of water, Eide said people in Gaza had a “sense of living in a prison” that was even greater than before.

“I think that could erupt into violence,” he said. “What I am afraid of is that people’s frustrations will increase, and a really weakened Hamas might try to take advantage of the frustration and try to gain credibility by doing something they should not do.”

Copyright - Original materials copyright (c) by the authors.
Posted by Sally Zahav at 3:04 AM