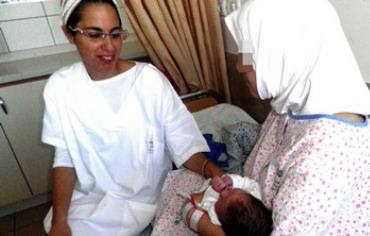 Her son is the first baby from a mother fleeing Syria’s civil war to be born in Israel.

When the mother realized there was no one in Syria who could deliver her, she asked to be taken to the border, where she hoped Israeli soldiers would pick her up and send her to an Israeli medical center, she said.

“I was very afraid to go, but I was even more worried about giving birth at home by myself,” she added.

The 20-year-old mother was in the early stages of labor when the IDF quickly transferred her from the Kuneitra region, where there was no access to a local hospital, to Safed.

Until now, only wounded Syrians have been among the hundreds of civilians escaping the war and seeking medical care in Israel.

The mother, who said she was herself a nurse, gave birth to a healthy, 3.2-kg. baby.

“I don’t feel like I am in an enemy country,” she said. “The staff are all helping me and worrying about me.”

The Syrian woman said there is a severe food shortage in her country, and that village residents are subsisting mostly on rice. In Ziv, she was given meat and vegetables.

“My baby, too, is getting wonderful, devoted care,” she said.

To protect her from being hurt when she returns to Syria, no details about her identity were released.

“We gave her postnatal advice. She’s a very young woman who came without her husband or anyone else accompanying her, and it was her first delivery.

“Our job is to ensure that every new mother remembers her delivery as an unforgettable, positive experience, whatever her ethnic, national or religious background,” said Eli.