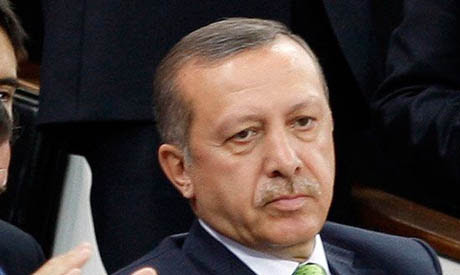 "[Turkish officials] insist on falsifying the real situation in Egypt and challenging the will of the Egyptian people," the ministry said on Tuesday in a statement published by state news agency MENA.

The Turkish foreign ministry called on Tuesday for the release of Morsi, who is currently in detention pending trial on charges of inciting violence during his presidency.

Morsi has been held in detention since his ouster by the military in July, after mass protests calling for an end to his presidency. Initially he was held without charge at an undisclosed location.

On Monday he appeared at a Cairo court for the first session in his trial.

"We believe the release of all political prisoners, including elected president Morsi, will contribute significantly to the emergence and sound implementation of the dialogue and reconciliation process in that country," read a statement on the official website of the Turkish foreign ministry.

A deadly crackdown on pro-Morsi protesters in Egypt on 14 August prompted the two countries to recall their respective ambassadors for consultations. The Turkish envoy returned to Cairo early in September, but Egypt says its ambassador will not return unless “interference” by Turkey in Egypt’s domestic affairs ceases.

Turkish Prime Minister Recep Tayyip Erdogan, one of the fiercest critics of Morsi's removal, has repeatedly called for his release and severely condemned recent violence.