US official says private meetings in Oman were "limited," most talks were "quite public" and Israeli officials were briefed on substantive conversations; former Iranian official: Khamenei warily approved meetings. 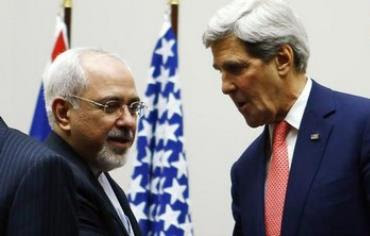 The resumption of direct talks between the two governments — after a hiatus of over three decades — led to an interim deal announced Sunday that will freeze much of the Islamic Republic's nuclear program.

"We've made clear that we were open to having bilateral discussions with the Iranians," one senior US official said on a conference call with journalists. "When President [Hassan] Rouhani was elected and indicated a new direction, we decided to take that seriously and to to test it."

The senior US official said that four of the secret US-Iranian meetings took place since Rouhani's August inauguration, a sign that the United States was trying to exploit the opportunity presented by the Iranian official's ascent.

Most US-Iranian interaction had been made "quite public," the official said, and the number of talks that were kept private have been "limited." US officials briefed their Israeli counterparts on substantive conversations on an individual basis.

According to the US official, who spoke on condition of anonymity, key Americans involved in the effort were William Burns, the US deputy secretary of state, and Jake Sullivan, the national security adviser to US Vice President Joe Biden.

The two men, at times with other officials such as White House national security staff member Puneet Talwar, met Iranian officials at least five times this year, the official said.

Burns, Sullivan and technical experts arrived in Muscat, Oman in March on a military plane - a way to preserve secrecy - to meet Iranians, the official added.

The United States was so eager to keep the role of Burns and Sullivan secret that it brought them to Geneva twice this month for wider talks between Iran and the major powers but left their names off the official delegation list and made them use hotel side entrances and service elevators to keep the secret.

A former Iranian official confirmed the secret talks and said they took place with the wary approval of Iran's Supreme Leader, Ayatollah Ali Khamenei, who was skeptical of the outcome but agreed to all the meetings to take place.

"All the meetings with Americans had the [supreme] leader's blessing. The first one was the most difficult one as we had to convince our top authority about the positive outcome of such meetings," said the former senior Iranian official.

"The leader gave the green light but was not optimistic about the result," he said. "We took a risk but we won."

An Iranian Foreign Ministry official, however, denied reports of secret meetings with the US, being quoted by IRNA as saying that "such speculation creates ambiguity over Iran’s clear-cut stance and interactive approach about the nuclear issue."

The Oman channel itself was nurtured by US Secretary of State John Kerry, who, as chairman of the US Senate Foreign Relations Committee made an unannounced trip to the Gulf state to meet Omani officials.

When Kerry became secretary of state, a job he has held since February 1, it was decided this channel would continue to help feed into the P5+1 talks, and Kerry visited Oman himself in May for talks with Omani officials.

In November, the Wall Street Journal reported on a series of meetings that had taken place in Oman over the course of the past year, leading to an historic phone call between US President Barack Obama and Iranian President Hassan Rouhani on September 28.

Kerry also spoke to the Iranian foreign minister by telephone on October 25 and November 2 - discussions that were not revealed by the State Department at the time.

Asked if the clandestine meetings were instrumental in helping achieve Sunday's nuclear agreement between Iran and the six major powers, the senior US official replied: "Yes."

The US Department of State considers Iran the world's leading state sponsor of terrorism, and sanctions it as such. The resumption of bilateral relations this year mark the first of their kind since the Iran's Islamic revolution in 1979.