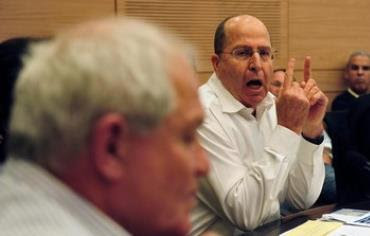 World powers are surrendering to Iran, coalition politicians said Sunday after P5+1 countries signed a deal with Tehran, with many referring to the 1938 Munich Agreement meant to appease the Nazis.
Defense Minister Moshe Ya'alon called the agreement a "historic mistake" and a "surrender to the Iranian charm and smiles offensive, and to Iranian fraud, which is aimed at gaining time, without the Iranian nuclear program being substantially harmed."

Speaking from Canada, where he is attending a conference of defense ministers, Ya'alon said the agreement "allows Iran to enter the family nations despite being the most active and flourishing activator of terrorism in the world, which sends its deadly and uncurbed deadly arms across the globe, first and foremost against Western states, as regime representative sit at the able in Geneva."
The Iranian nuclear program threatens not only Israel and other Middle East countries, but also world peace, Ya'alon warned. "To leave in the regime's hands capabilities for continuing the nuclear program means that the world today is a less safe place. Instead of rolling the program back, the regime in Tehran has gained time, which will allow it on the one hand to seek a nuclear bomb, and on the other, breathing space due to the lightening of sanctions," the defense minister continued.
Hours ago, before the deal was signed, the regime in Tehran was facing heavy economic pressure that threatened its existence, and which could have forced it to choose between survival and continuing the program, Ya'alon stated, but now the regime is being legitimized and its isolation will be lifted, strengthening its economy.

According to Foreign Minister Avigdor Liberman, "the whole political spectrum says this is a bad deal and that it is not binding for us."

"We are in a new reality that is different from yesterday, and it requires us to reevaluate the situation with good judgment, responsibly and determinedly," Liberman added.

Hinting at the possibility of military action, the Foreign Minister said "we will do what we must and will not hesitate for one minute – and there is no need to add another word."

Tourism Minister Uzi Landau said the "winds of Munich are blowing from Geneva," and that the government must act immediately to convince the world that the deal signed is a bad one.

"We woke up this morning to a reality in which a bad, very bad deal was signed in Geneva," Economy Minister Naftali Bennett stated. "The bad deal gives Iran exactly what it wanted. It eases sanctions and preserves the most significant parts of its nuclear plan."

Bennett warned that "if a nuclear suitcase explodes in New York of Madrid in five years, it will be because of the agreement signed this morning."

Israel will not be bound by an agreement that endangers its existence, the Bayit Yehudi leader added.

"Today, Iran is celebrating what the whole world will cry about in the future," Housing and Construction Minister Uri Ariel warned.

Knesset Speaker Yuli Edelstein said Israel can only rely on itself and he's sure that "the day in which the six world powers that signed this shameful agreement will regret it is not far."

"Seventy years after the greatest crime in the history of mankind, we have no choice but to hope that history will not repeat itself," Edelstein said, referring to the Holocaust.

Deputy Defense Minister Danny Danon said that "all options are still on the table and Israel has the right to defend itself."

MK Ayelet Shaked (Bayit Yehudi) quipped: "As [former British prime minister Neville] Chamberlain said: Everything would have been alright if Hitler hadn't lied to me."

MK Moshe Feiglin (Likud Beytenu) compared Israel to Czechoslovakia in the Munich Agreement, saying the government watched from the sidelines as other countries dealt with existential threats and calling for an end to Israeli cooperation with world powers on the matter.

"The idea that we need to share the responsibility for taking care of Iran with the whole world is disastrous," Feiglin stated. "When [Former Iranian president Mahmoud] Ahmadinejad started threatening to destroy us, the world's jaws dropped and expected an Israeli military reaction. It would have been easier then."

Shas backed the government's position on Iran, with party leader Arye Deri and MK Eli Yishai sending supportive messages saying the diplomatic option was a failure and the world put narrow economic interests before their responsibilities to Israel.

However, left-wing parties in the opposition were more cautious in their take on the Iran deal.

"The agreement signed between world powers and Iran is a done deal and Israel has to get used to the new reality," new opposition leader Isaac Herzog (Labor) remarked. "We have to learn the details of the accord and it could even have positive aspects."

Herzog called on Prime Minister Binyamin Netanyahu to do whatever he can to repair Israel-US relations to bring a better result in six months, when the interim deal expires.

"We have many partners in the effort to stop Iran's nuclear plans. We must act with in concert with them," he said.

Meretz leader Zehava Gal-On spoke out in favor of the deal, saying its critics "missed the point" and are trying to distract the public from the fact that it removes the faster option for developing a bomb.

"The central sanctions that will not be removed from Iran and increased supervision by the IAEA, including daily visits, show that this is an achievement not only for the US, but for Israel, too," she stated.