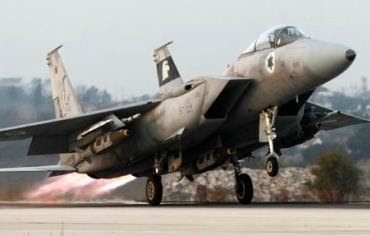 The IDF struck targets in the Gaza Strip on Tuesday afternoon in retaliation for the cross-border shooting earlier in the day in which Israel sustained its first casualty since the end of Operation Pillar of Defense in 2012.

The IDF employed the air force, tanks, and infantry to launch a response against six targets in Gaza.

Gaza hospital officials said three-year-old Hala Abu Sbeikha, was killed by shrapnel during the strike on the Bureij facility. She was standing with other family members outside their home in the nearby al-Maghazi refugee camp and her mother and two brothers were wounded, the officials said.

According to Ma'an, the targets included a military strike belonging to the Islamic Jihad's al-Quds Brigades between Khan Younis refugee camp and the city of Deir al-Balah and in the al-Atatra area of the northern Gaza Strip.

"We identified an accurate strike of the targets. All of our planes returned to their bases safely," the IDF Spokesman said.

"Terrorist organizations have made it their goal to harm Israeli civilians. The IDF will act with determination against any element seeking to activate terrorism against the state of Israel. Hamas is the address and it is responsible," the IDF spokesman added.

During the IDF's wave of attacks, infantry soldiers struck targets with anti-tank missiles.
"We take a severe view of this, because it occurred on Israeli territory," a senior security source said of the cross-border shooting. He described the targets hit in Gaza as "terrorism infrastructure targets" belonging to Palestinian Islamic Jihad and Hamas.

"We're prepared for further steps if necessary," the source said.

Spokesmen for the Palestinian Authority and Hamas condemned the IAF airstrikes on Tuesday evening, Ma'an reported.

Concerned that "escalating violence" could result in "another cycle of bloodshed," United Nations Secretary-General Ban Ki-moon warned on Tuesday against further retaliatory strikes from Israel against the Palestinian territories.

Ban condemned "the killing of an Israeli civilian today as a result of cross border fire from Gaza, and the bus bombing near Tel Aviv on Sunday," his spokesman said in a statement.

"He also deplores the death of a young child in Gaza from Israeli retaliatory raids today as well as a number of Palestinian civilian casualties since Friday," the statement said, adding that the secretary-general hopes a two-state solution will end violence between Israel and the Palestinians "permanently."

Reuters and Michael Wilner contributed to this report.