Egypt and the Threat of Islamic Terror

EXECUTIVE SUMMARY: Egypt’s new rulers are faced with a terror problem emanating from the Sinai Peninsula, with the emergence of radical jihad groups. The US and international community must support the Egyptian regime to prevent the radical Islamic groups from turning Egypt into the next Syria. 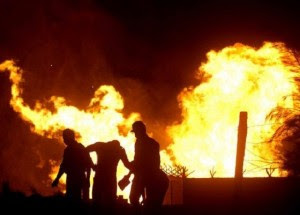 Prime Minister Hazem el-Beblawi vowed to hunt down the perpetrators of the explosion, saying the attack was aimed at obstructing a roadmap drawn up by the country’s interim regime following Morsi’s ouster. The final phase of the roadmap will begin next month when a referendum on the newly-drafted constitution takes place, to be followed by parliamentary and presidential elections. A cabinet spokesman blamed the blast on Morsi’s Muslim Brotherhood, while el-Beblawi officially declared the group a terrorist organization.

Three main trends of terror activities can be observed in Egypt since the ouster of President Morsi. The first is Islamic terror in Sinai, which has become the main theater of confrontation between terror groups and the Egyptian armed forces. The second is the spillover of terror from Sinai to other parts of Egypt. The third is the increasing involvement of foreign groups al-Qaeda and Global Jihad in Egypt, and activity originating from the Hamas-controlled Gaza Strip.

Most terror attacks since Morsi’s overthrow have occurred in the Sinai region, which borders Israel and the Palestinian Gaza Strip. Around 200 soldiers have been killed in Sinai since July 2013. Ansar Beit al-Maqdis, which carried out two attacks on ships in the Suez Canal, and other Sinai-based Islamic groups have been blamed for the uptick in violence. The Islamist insurgency is composed of Islamist militants who escaped prison, were released during the revolution, or returned from exile after the ouster of Hosni Mubarak.


Spillover of Terror From Sinai

Terror attacks have increased in Egypt since Morsi’s exit, especially in response to heavy-handed military tactics against pro-Morsi and Muslim Brotherhood supporters. Numerous police stations and churches were attacked across the country in the aftermath of the dispersal of pro-Morsi sit-ins in August, in which hundreds were killed. More than 100 policemen have been killed as well. Authorities in the Suez Canal said in late August that a terrorist staged an unsuccessful attack on a container ship passing through the canal, in an attempt to disrupt the flow of ships through the waterway. Blocking the canal would have an immediate strategic effect, affecting global energy prices and causing significant blow to Egypt’s economy and prestige.

In September, Egypt’s Interior Minister Mohamed Ibrahim survived an assassination attempt when a bomb detonated near his convoy in northeast Cairo. Ansar Beit al-Maqdis claimed responsibility for some of the attacks, including the attempt to assassinate the interior minister.

A major concern is the growing transnational links between Ansar Beit al-Maqdis and other Egyptian jihadists and al-Qaeda. Reports mount of foreign fighters joining Ansar Beit al-Maqdis, a trend encouraged by influential religious clerics who speak out on the Internet about the jihad in Egypt. One such fighter is Mohamed Jamal al-Kashef, who was captured by Egyptian security forces in 2012. Al-Kashef’s network was linked to the September 2012 assault on the US consulate in the Libyan city of Benghazi. Since Morsi’s ouster, relations between Hamas and Egypt’s new rulers have deteriorated. The Egyptian media accuses Hamas of “interfering in Egypt’s internal affairs” and providing support to the Muslim Brotherhood – claims dismissed by both the Brotherhood and Hamas. Egyptian officials say that Palestinian fighters sneak into the Sinai via tunnels to provide military assistance for Brotherhood supporters. In June, an Egyptian court ruled that Hamas and Hizballah, together with the Brotherhood, were involved in facilitating a jailbreak of prisoners, including Morsi, during the anti-Mubarak uprising. After the July coup, authorities started to act against Hamas, closing the Rafah border crossing repeatedly and destroyed hundreds of tunnels that Hamas used to smuggle weapons, fuel, building materials, and other goods.

In October 2013, Egyptian security officials warned that the military had drafted plans for attacking targets in the Gaza Strip, to be carried out should there be an escalation in violence against Egyptian forces in Sinai by terror groups operating from Hamas-controlled Gaza. The warning came after masked gunmen shot and injured three Egyptian soldiers in the northern Sinai. The commander of Egypt’s Second Army said that the Egyptian military’s patience with jihadists in the Gaza Strip was wearing thin. These statements were made following Egyptian Foreign Minister Nabil Fahmy’s warning his country could take military action against Gaza terrorist groups, in light of continuous attacks against the Egyptian army in Sinai, particularly in the areas of Rafah and Sheikh Zuweid, adjacent to the Gaza border.

According to Israeli and Egyptian intelligence, most of the terror groups operating today in the Sinai Peninsula have an organizational base in Gaza. Some of the groups have weapons caches there, while others operate training camps. In addition, the Egyptian military has specific information indicating that members of prominent terror outfits, some affiliated with al-Qaeda, are hiding in Gaza. One of the organizations, Jaysh al-Islam (the Army of Islam) enjoys close relations with the Hamas leadership.

The jihad challenge to Egypt’s new rulers is still in its early stages, as the jihadists are still developing their skills and strategies. What began as opportunistic shooting attacks have now developed into suicide attacks and huge car bombings, a clear development of capability and strategy. The Egyptian authorities have to take in consideration that radical elements of the Muslim Brotherhood can in the future open an armed internal front that can be a serious challenge to internal security and stability.

The US and the international community must support the Egyptian regime in the war against terror, to prevent the different radical Islamic groups from turning Egypt into a theater of jihad like they did in Syria. Egypt needs stability, not a decent into chaos.


Col. (res.) Dr. Shaul Shay, a research associate at the Begin-Sadat Center for Strategic Studies, is a former Deputy Head of the Israel National Security Council. He lectures at Bar-Ilan University and the Herzliya Interdisciplinary Center.