Palestinians Reiterate Plans to Reject any Framework Accord Presented by US


Ahead of Kerry visit, PM reportedly decides to delay announcement of new settlement building until after US diplomat leaves region. 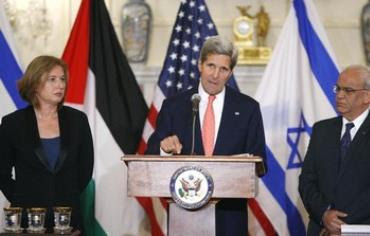 US Secretary of State John Kerry with Tzipi Livni and Saeb Erekat,
July 30, 2013. Photo: REUTERS/Jonathan Ernst
As US Secretary John Kerry prepares to resume his efforts to achieve an agreement between Israel and the Palestinian Authority, a PLO official announced Wednesday that the Palestinians would reject any framework accord that is presented by the Americans.

The top US diplomat was due to arrive to the region Thursday.

“Kerry will try to market a mysterious and nonconstructive framework agreement to the Palestinian Authority during his new tour,” said PLO Executive Committee member Tayseer Khaled.

Khaled accused the US of turning a blind eye to Israel’s practices on the ground in the West Bank and east Jerusalem.

He said that Israel’s measures undermine the peace process and prospects of establishing a sovereign Palestinian state.

Khaled said that the Israeli ministerial committee would not have been able to approve a bill supporting the application of Israeli law to settlements in the Jordan Valley had it not felt that it had the backing of Kerry.

PA President Mahmoud Abbas, meanwhile, reiterated his threat to seek UN recognition of a Palestinian state should Israel pursue construction in the settlements.

Addressing Palestinians on the 49th anniversary of the founding of his Fatah faction, Abbas denounced settlements as a “cancer.”

He said that the PA maintained the right to use its status as non-member observer in the UN to take diplomatic, political and legal action to halt settlement construction.

Abbas too rejected the idea of reaching an interim agreement with Israel, saying he insists on a final peace deal.

“We are negotiating to reach a solution that would immediately lead to the establishment of a Palestinian state with Jerusalem as its capital on all the lands that were occupied in 1967,” Abbas declared. “We also seek a just solution to the case of the refugees on the basis of UN resolution 194 and the 2002 Arab Peace Initiative.”

Meanwhile, Prime Minister Binyamin Netanyahu has reportedly decided to ask the Housing Ministry to postpone an expected announcement of further settlement construction beyond the Green Line until after Kerry's impending visit.

In a bid to avoid international criticism, the premier was seeking for the ministry to refrain from publishing building tenders for 1,400 new housing units in the West Bank and east Jerusalem, Army Radio reported Wednesday.

The move was expected to follow Israel's release overnight Monday of the third batch of 26 Palestinian prisoners as a gesture for peace talks, Army Radio reported.

The radio station cited political officials who have recently met with Netanyahu as saying he was torn between his desire to not be accused of failure in negotiations with the Palestinians and that of not being seen as a "sucker" for releasing 104 long-serving Palestinian security prisoner and not receiving anything from the other side in return.