Palestinian media reports that Kerry told PA president that he would meet the same fate as former president Arafat if he did not accept American peace proposals; report says Abbas interpreted this as veiled death threat. 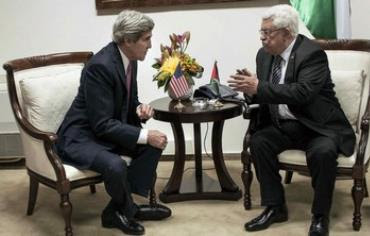 US Secretary of State John Kerry recently threatened Palestinian Authority President Mahmoud Abbas that he would meet the same fate as his predecessor, Yasser Arafat, if he turned down Washington’s proposals for peace with Israel, a Palestinian source was quoted Sunday as saying.

Jamal Muhaissen, a senior Fatah official in the West Bank, said that if the report about Kerry’s threat to Abbas is true, “this shows that Israel assassinated Yasser Arafat after receiving a green light from the US Administration.”

Muhaissen said that Kerry’s threat comes in wake of his failure to impose a settlement on Israel that is “consistent with international law.”

Kerry should not hold the Palestinians responsible for his failure with the Israelis, the Fatah official added.

“If true, Kerry’s threat paves the way for bringing him before the International Criminal Court for threatening the life of an elected Palestinian president,” Muhaissen said.

A Palestinian source told the daily Rai al-Youm that Abbas angrily stormed out of a four-hour meeting with Kerry in Ramallah after the latter exerted pressure on him to accept the proposals.

The source claimed that Kerry told Abbas that his fate would not be “less than that of Yasser Arafat.”

Kerry’s proposals were received with shock and rejection by Abbas, the source added.

The source said that Kerry’s proposals do not meet the minimum of Palestinian aspirations and Abbas’s promises to his people.

“Abbas wants future generations to remember him as a hero who managed to achieve for his people what the largest Arab powers and parties failed to obtain in all their wars with Israel,” the unnamed source explained.

The source claimed that Kerry’s proposals call for the annexation of 6-8 percent of West Bank land to Israel. In return, the Palestinians would be compensated with 5.5 percent of land from inside Israel.

In addition, the source said, the proposals envisage the opening of a safe passage between the West Bank and Gaza Strip and the division of east Jerusalem.


As for the issue of the refugees, the source said, Kerry wants to establish an international fund for settling Palestinians in Australia and anywhere else they wish. Only a small number of refugees would be permitted to enter Israel in the context of “family reunion.”

author
Posted by Sally Zahav at 2:13 AM