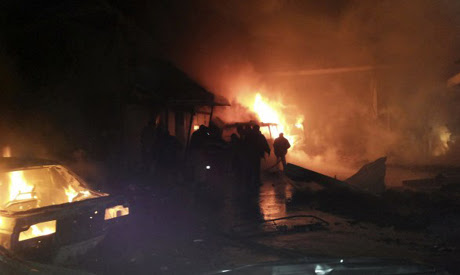 People try to extinguish fire at the site of an explosion in the Shi'ite town of Hermel
February 1, 2014. (Photo: Reuters)


Bombings are likely to continue in Lebanon until Hezbollah rescinds its decision to intervene militarily in Syria’s civil war, analysts have warned.

The frequency of these bombings will also increase because Sunni extremist groups have vowed to escalate their attacks against Hezbollah and to defend their fellow Sunnis, Fadi Chahine, a Lebanon-based writer, entrepreneur and strategist tells Ahram Online.

"Once again, the hands of treason target Lebanon and claim the lives of innocent citizens," said Mikati in comments reported by Lebanon's National News Agency (NNA).

Al-Nusra Front in Lebanon claimed responsibility for the car bomb in a stronghold of Shia militant group Hezbollah at the northern end of the Bekaa Valley.

In earlier statements, Al-Nusra and another jihadist group warned Sunnis to avoid all areas where Hezbollah operates, which are "legitimate targets."

Lebanese and Sunni sects refuse to be a part of any war between Hezbollah and Al-Qaeda, former Lebanese Prime Minister Saad Hariri, who heads the anti-Syrian Future Movement, said in a statement. They also reject the idea that civilians in Lebanon are a target in this crazy war and condemn its dangerous repercussions on national and Islamic unity.

Dr Joshua Gleis, an international security consultant, says spillover from Syria into Lebanon is to be expected due to the heavy involvement of major Lebanese religious and political groups in the conflict.

"Hezbollah is often blamed for the crisis in Lebanon because it essentially acts as a state within a state, and often does not act in the best interests of the country, but rather in the interests of Iran," Gleis says.

"It refuses to disarm and uses its military might as it sees fit, without permission from the Lebanese government. If Hezbollah used its incredible organisational and political structures to assist Lebanon as a whole, instead of helping only its constituents and threatening to use force against those it disagrees with, I think it could become a tool for good. As long as it remains a separate armed force outside government control it will continue to be held responsible and blamed for its activities."

Hezbollah must consider surrendering its weapons to the Lebanese Armed Forces and disengage itself from the civil war in Syria, Chahine says. The disassociation policy, which it supported early on, would be the best policy for it to follow at this point in time.

"The impact of Syria’s civil war on Lebanon has accelerated the deterioration of the country’s institutions and damaged its economy," Chahine adds. "Many local experts fear the worst, especially as the bloodshed continues to be fueled by sectarian violence.

"The spillover effect will have long-lasting implications for Lebanon and the region as newly radicalised elements and well-entrenched extremists make their way from around the world to enter the conflict in Syria and Lebanon."

By siding with the Assad regime, the regime's Alawite supporters and Iran, and taking up arms against Sunni rebels, Hezbollah has placed itself at the epicentre of a sectarian conflict that has nothing to do with the group's purported raison d'être: resistance to Israeli occupation, Matt Levitt, senior fellow and programme director for counterterrorism at the Washington Institute, tells Ahram Online.

Saad Hariri, who has been living in exile in France and Saudi Arabia since 2011 when his government was toppled by Hezbollah, recently announced that he would return to Lebanon to take part in parliamentary elections later this year.

Lebanon has been without a fully functioning government since Prime Minister Najib Mikati resigned last March. A caretaker cabinet with minimal powers is running the country while parties try to reach a deal to form a government ahead of parliamentary elections due in November.

Political parties in Lebanon are seemingly open to an 8-8-8 cabinet formula in which the March 8 and March 14 factions would each get eight ministers, with the remaining eight allotted to centrists.

Gleis believes the Lebanese political structure is broken, and until it is fixed it will continue to cause disunity. The government is required to have a Christian president, Sunni prime minister and Shia speaker of parliament. People are thus encouraged to keep to their own religious and ethnic groups, instead of building a national identity irrespective of religion.

Chahine says a national unity cabinet is impossible at this juncture. However, prime minister-designate Tammam Salam and President Michel Suleiman appear determined to form a “fait accompli” cabinet, consisting of 14 neutral figures, by early next week. More than half of Lebanon’s population supports the move even if this means increasing tensions with Hezbollah.

The expectations for Lebanon in 2014 are very grim, especially in the first six months.  More systematic sectarian violence is expected and political leaders will not be able to control the situation on the ground as the number of dead innocent Lebanese rises, Chahine concludes.

author
Posted by Sally Zahav at 2:15 AM