Is it Too Late to Stop Iran? - Ari Soffer

Senior US Congressman says Obama admin 'playing into the hands of the Iranians' in nuclear talks - but insists Congress can fight back. 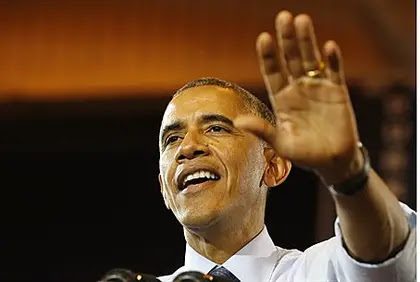 Barack Obama
Reuters
US President Barack Obama is "playing right into the hands" of the Iranian regime by yet again extending talks over its nuclear program - but a Republican-dominated Congress isn't going to go quietly.

Speaking to Arutz Sheva, Roskam says he was "not surprised" at the decision to push off the deadline for talks with Iran for another seven months, but says he was nevertheless "very disappointed."

"This continues to play right into the Iranians' hands," he said of the decision. "Now they've managed to extend this charade for an additional several months."

"They continue to get the benefit of a loosening of sanctions, more and more companies are trying to position themselves to be the first ones into the Iranian market - it's definitely a setback."

But what of vague references by US and other leaders regarding "progress" towards a deal, if not an outright deal so far?

"The administration can say anything it wants and it doesn't have to disclose any details, and I don't believe there's been progress from our point of view."

But for Tehran, each delay is a step closer to victory, he warns.

"History is filled with examples of tyrants who manipulate the world with false claims of cooperation, all the while laying out a plan that's aggressive and clear - and I think that the Iranians are doing the exact same thing."

"There's nothing that the administration can point to that is substantive," he added, contrasting the White House's weak stance with that of "the mullahs (who) have been very clear that they intend to give up nothing."

Roskam emphasizes, however, that Congress can still play a role in pushing back against the President's "wishful-thinking foreign policy" by bringing the Kirk-Menendez Bill for tougher sanctions on Iran up for a vote.

"Congress has a duty to not be complicit in the foreign policy mistake the administration is making," he insists, expressing "every confidence" the bill would pass in an overwhelmingly Republican House of Representatives. "I expect it would pass the Senate as well."

Turning back to the White House, Roskam points to the resignation of Secretary of Defense Chuck Hagel yesterday as proof that "the administration has no capacity to reflect and absorb what is actually happening."

"The president has not stepped back from a domestic point of view and said what can he learn and what are the American people telling him. Instead he's doubling down."

Worryingly, Roskam believes that come what may President Obama will not change course vis-a-vis Iran - even if the new seven-month deadline passes without a deal to prevent the Islamic Republic from reaching the nuclear weapons threshold.

"There is zero likelihood that the administration will admit to a foreign policy failure because they have built so much in looking for a legacy," he said, echoing comments he made in an interview earlier this year.

"No matter what happens the administration is going to try to claim victory - even if the talks collapse," Roskam warns.

Taking aim at Barack Obama personally, he accused the President of using a cult of personality as a substitute for real policy.

"Since the beginning of his presidency he has created a foreign policy based on his own personality, instead of... what's in the best interest of the US and freedom around the world."

"Other presidents have used their personality to supplement American policy," he continued, pointing to Ronald Reagan as an example. "But this is the first US President who allows his personality to become the policy, and that's been a great weakness"

He traces that stance all the way back to Obama's famous 2009 speech in Cairo, which Roskam summed up as consisting of three points: "I am not George W. Bush; I am Barack Obama; I want you to like us."

"He has assumed that [his personality] primarily has been able to form and shape world events in the same way as American power has.

"But personalities can't move great events - they can influence, but they can't shape events."

When asked whether he thought the president's policies were reversible, Roskam distinguished between the "damage" done to US foreign policy in general, and its policy vis-a-vis Iran in particular.

"American foreign policy is easier to remedy" when Obama's term ends in 2016, via "a strong administration working with a strong Congress and the US playing its natural leadership role in the world."

"That's already begun to happen with the reshaping of Congress" during the mid-terms, he noted.

But Iran in particular is a different question, and Roskam admits he is concerned.

"I don't know if this dithering and hopeful, wishful thinking, vanity-seeking foreign policy is giving the Iranians enough of a time advantage that they need - and only time will tell unfortunately."