A gang that was stealing ancient relics from a desert cave - close to where the famed Dead Sea Scrolls were found - has been arrested, Israeli officials say. 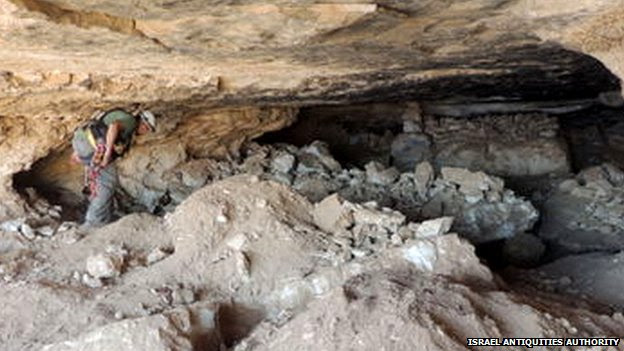 The alleged thieves were caught as they were leaving a site known as the "Cave of Skulls", halfway down a sheer cliff.

Robbers have long been targeting archaeological sites in the remote area, which was a hideout for Jewish rebels in the days of the Roman empire.

Items left behind by the rebels - ranging from shoes and tools to texts written on papyrus - have been preserved for centuries in the arid desert air and can fetch large sums on the black market for looted relics.

A set of ancient relics - known as the Dead Sea Scrolls - were discovered in caves in this region between 1947 and 1956.

The scrolls include the oldest copies of many Biblical texts, as well as secular writing relating to life in the 1st and 2nd Centuries AD.

Robbery has long been a problem in the area - but Israeli authorities say this is the first time in decades that suspects have been caught in the act on the desert cliffs.

According to a press release from the Israel Antiquities Authority, the gang was discovered by chance, when search and rescue workers on a training exercise in the desert spotted suspicious movement near a cave.

The area was placed under surveillance, the press release said, and the suspects were observed "carrying out an illicit excavation".

They were arrested while returning to the top, carrying looted artifacts, as well as "lighting equipment and ropes" and "sophisticated metal detectors".

The press release said the suspects had caused "tremendous damage" by digging through earth dating to the Roman period, 2,000 years ago, and the Chalcolithic period, 5,000 years ago.

It added that the suspects "demonstrated considerable expertise in reaching the cave by climbing and rappelling down the cliff".

The gang were all young men from Seir, a village near Hebron, the press release said.
The arrests were made last weekend, and the charges were made public on Sunday.

Copyright - Original materials copyright (c) by the authors.
Posted by Sally Zahav at 3:07 AM