by Hezki Ezra and Tova Dvorin 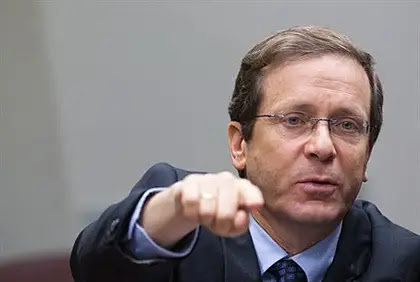 Labor leader Yitzhak Herzog has vowed to shut down the World Zionist Organization's Settlement Division, which functions as an operational arm of the government to build and establish communities and infrastructures in Judea and Samaria - leaving hundreds of thousands of Israelis in the region without governmental representation.

"As Prime Minister I will close the Settlement Division and open it later to serve the Negev and the Galilee," Herzog stated during an interview on "Meet the Press" Saturday night. "We see again and again the same group takes over the interests of the state and Netanyahu gave in to it."

"If we examine what is offered in top ten most Likud members, we see nightmares and horror," Herzog said. "These are people who promoted legislation that goes against the basic democratic structure of Israel, against the judiciary, against Israel's political interests."

389,250 Jews now live in Judea-Samaria, up over 15,000 people since 2013 - all of whom would be left without active government representation in the event Herzog carries out his threat.

An additional 375,000 live in neighborhoods of Jerusalem over the 1949 Armistice line, such as the French Hill, Sanhedria, the Mount of Olives, and Mount Scopus.

Herzog has, in the past, suggested dividing Jerusalem and making land swaps in a peace deal with the Palestinian Arabs - thus also effectively supporting the expulsion of over 764,000 people in the name of a deal with Palestinian Authority (PA) Chairman Mahmoud Abbas.