It was the year that Belgium itself was named a "terrorist recruiting hub" by the Wall Street Journal. And in Germany, France, England, and the Netherlands, pro-Islamic State demonstrations laid bare the growing support of terrorism and Islamic jihad among Europe's expanding Muslim population – all while politicians either stood back or even contributed to the praise. 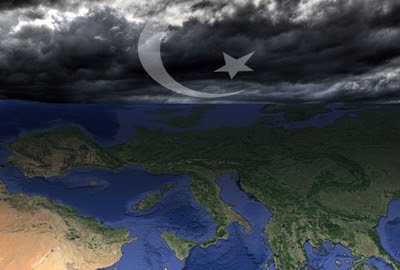 Among the trends of 2014 – "Gone, Girl," Lena Dunham, and $55,000 potato salad – was another the list-makers seem to have missed: it was also a very good year for Islamic jihad. And while this was true on the battlefields of Syria and the cities and villages of Pakistan, it was true, too, in more subtle ways throughout the West – and especially in Europe. It was, for instance, the year of Mehdi Nemmouche's slaughter of four Jews at the Jewish

It was the year that Belgium itself was named a "terrorist recruiting hub" by the Wall Street Journal. And in Germany, France, England, and the Netherlands, pro-Islamic State demonstrations laid bare the growing support of terrorism and Islamic jihad among Europe's expanding Muslim population – all while politicians either stood back or even contributed to the praise.

Throughout 2014, Europeans faced pro-IS, anti-Jew demonstrations in Paris, Hamburg, Amsterdam, London and The Hague, and the establishment of "sharia zones" in London, Wupperthal, and elsewhere. True, such zones do not necessarily delineate areas in which sharia law, rather than state law, applies. But the term helps them define those largely-Muslim neighborhoods whose residents tend to be radical and who often support jihadist movements both at home and abroad.

Combined, these events signal the increasing success of Islamists who are working to change Europe from within – sometimes through violence, but more often through strategies known as "stealth jihad" – a way of applying social and political pressures to transform the current culture.

Take, for instance, the response of Josias van Aartsen, mayor of The Hague, to radical Muslims who called for the death of Dutch non-Muslims and Jews during pro-IS rallies in August: then on holiday, Van Aartsen declined to return home, ignoring even the throwing of stones at non-Muslims and the police. Only when a counter demonstration against IS was planned in the same, Muslim-majority neighborhood did Van Aartsen take action: he forbade it. "Too provocative," he said.

Or there are the recently-leaked intelligence briefs in France, as reported by the Gatestone Institute, that "Muslim students are effectively establishing an Islamic parallel society completely cut off from non-Muslim students," while "more than 1000 French supermarkets, including major chains such as Carrefour, have been selling Islamic books that openly call for jihad and the killing of non-Muslims."
In England, an "Operation Trojan Horse" outlined plans to Islamize schools in Muslim neighborhoods. According to the Guardian, a government investigation of the program last summer found a "'sustained, coordinated agenda to impose segregationist attitudes and practices of a hardline, politicised strain of Sunni Islam' on children in a number of Birmingham schools." Among those responsible for the "Operation" were the Association of Muslim Schools – UK and the Muslim Council of Britain – the same organization that, in 2011, declared that women who do not veil their faces "could be guilty of rejecting Islam."

Ironically, it seems to have been England's own culture that allowed the rise of Islamist teachings in its schools to begin with. Even Britain's education secretary Nicky Morgan admitted to the New York Times that much of the operation's success could be attributed to public "fear of being accused of racism and anti-Islamic views." Not for nothing did former Obama advisor Lawrence Krauss declare the British "too polite" and "scared of offending 'vocal and aggressive Muslims.'"

The government's discovery of "Operation Trojan Horse" and immediate efforts to dismantle it are commendable, but it is difficult to assess the damage already done to Muslim children in the British schools. By some accounts, as many as 2,000 Britons have joined the (Sunni-led) jihad in Syria and Iraq. That includes the man known as "Jihadi John," who beheaded U.S. journalists James Foley and Steven Sotloff. And, experts warn, the number of so-called "junior jihadis" – children under 10 who have become radicalized – is on the rise.

Not that such warnings are likely to do much good: The UK has, until recently, spent tremendous resources on programs aimed at preventing Muslim youth from joining militant groups, which have for the most part failed. "Having undertaken the 'most significant domestic program by any Western country to foster a moderate version of Islam and prevent radicalization, the UK has effectively given up trying to stop jihadists from being created," James Brandon, the former research director at one such program, told Reuters.

Despite such developments, European lawmakers have had a hard time figuring out how to deal with Muslim radicals, especially with returnees from Syria and Iraq. England is hardly the only place where politicians fear "offending" the sensibilities of Muslim groups. Although an estimated 450 Germans have joined the jihad in Syria, German Green Party domestic policy expert Irene Mihalic told the magazine Der Spiegel in September that tougher counterterrorism laws were unnecessary because "there are already 'sufficient levers available to impose bans and limitations' on terrorists and their supporters." Majority parties apparently disagreed. Later that month, Germany became the first country to fully outlaw IS, along with all expressions of support for the terrorist group, from banners and graffiti to public demonstrations and endorsements by local mosques.

Such has hardly been the case in Denmark, though, where unwillingness to "offend" or "provoke" the country's Muslim community has translated into a program that seeks to rehabilitate returning jihadists, rather than imprison them. In the country that boasts the second-largest number (per capita) of Muslims to join jihadist groups, returnees receive generous handouts in the form of government assistance in finding homes and jobs, or tuition aid in order to continue their education. In addition, the rehab program "does not try to change the fundamentalist beliefs of the returning fighters – as long as they don't advocate violence," CNN reports.

Evidently pampering jihadists isn't working very well: Danish intelligence recently warned that returnees from IS and Al Nusra camps now pose a "significant" threat to the country. One jihadist profiled by CNN said that he plans to return to Syria to rejoin the caliphate once he completes his Danish government-funded education.

Other European governments have been reluctant to prosecute those recruiting for ISIS and other terrorist groups – groups that are in effect encouraging people to commit murder. In December, Dutch courts declared a 20-year-old woman "not guilty" of recruiting women to join the jihad in Syria on the grounds that women in IS are not permitted to fight – and hence cannot be considered terrorists. In another case, 23-year-old "Imad al-O" was found guilty of helping a 16-year-old girl travel to Syria via Egypt. His sentence? Three months prison time and 240 hours of community service.

Through it all, "lone wolf" radicals continue their attacks in European cities, such as the Dec. 21 attack in Dijon by a man who drove a car into a crowd of pedestrians, claiming he was "acting for the children of Palestine."

The attack "for the children of Palestine" occurred just as French officials determined to join Sweden in recognizing a Palestinian state – a kind of international version, you might say, of England's decision to stop trying to keep Muslim youth from radicalizing and becoming warriors for Islam. Unlike Kickstarter potato salads, it's a trend we can well leave behind as we move into the new year.
Abigail R. Esman

Abigail R. Esman, the author, most recently, of Radical State: How Jihad Is Winning Over Democracy in the West (Praeger, 2010), is a freelance writer based in New York and the Netherlands.