Arabs 'insist on inhaling the scent' of the blood of dead terrorists, reports Abbas's paper, in a twisted blood worship ritual. 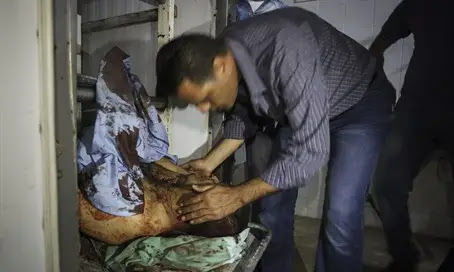 Family members kiss body of terrorist killed in stabbing attack
Flash 90
The official paper of the Palestinian Authority (PA) has given voice to a strange new fetish among Palestinian Arabs, describing how they cherish "inhaling the scent" of the blood of murderous Arab terrorists.

An article published in PA Chairman Mahmoud Abbas's Al-Hayat Al-Jadida last Thursday and translated Tuesday by Palestinian Media Watch (PMW) describes the reaction of Arabs to the death of a terrorist, who was shot while attempting a stabbing at Jerusalem's Damascus Gate last Wednesday.

"(Palestinian Arabs) insisted on inhaling the scent of the martyr's blood. ...The residents of Jerusalem, who waited to inhale the scent of the blood which was still on the ground and in the water which turned slightly red from it, formed a circle, and they recited the (Koranic Sura) Al-Fatiha for the martyr's (soul)," reported the paper.

The blood worship described in the article gives stark illustration to the "culture of death" that Deputy Foreign Minister Tzipi Hotovely (Likud) accused Abbas of nurturing on Monday.

Hotovely quoted Abbas, who said on PA television on September 16: “we welcome every drop of blood spilled in Jerusalem. This is pure blood, clean blood, blood on its way to Allah. With the help of Allah, every martyr will be in heaven, and every wounded will get his reward.”

Abbas's infatuation with the blood of Arab terrorists who died conducting their murderous attacks is in fact a central concept of Islam according to PMW, which noted one Hadith - sayings attributed to Mohammed - says the following regarding the blood of a martyr on Resurrection Day: "its color saffron, and its odor musk" (Sunan Abi Dawud 2541, Book 15, Hadith 65).

The Al-Hayat Al-Jadida article last Thursday, in addition to providing an insight into the terrorist blood fetish, significantly distorted the events of the attack.

In the attack, terrorist Basel Sidr ran at Israeli police and tried to stab them before being shot and killed. However, the PA paper's account did not make mention of his stabbing attempt - much like MSNBC's coverage of the same incident.

The article reported: "soldiers armed with weapons are smiling, after having unloaded their rage and bullets onto the body of the 20-year-old martyr Basel Sidr...(at) the Damascus Gate, which started to cry blood for the martyrs who fall one by one on the Al-Aqsa (Mosque's) gates and the (Jerusalem) city gates."

"The distance between the bullet and death was short. Basel fell after one of the guards shot two bullets at him. Then, more soldiers who expected medals of honor for having riddled his body with bullets (shot him). ...Men of Israel's General Security Service spread around the area, before the rest of the teams came to document the killing, and the martyr's body was taken in a plastic bag, and the soldiers continued smiling after that as well," continued the PA paper's libelous report.
Another article in the same paper on the same day likewise twisted events, claiming that Israeli leaders are encouraging terrorism - while it is in fact Abbas's Fatah and Palestine Liberation Organization (PLO) that have been doing so.

"All the mouths in the (Israeli) right-wing government call for murder while our blood is on their teeth, and all the (Palestinian) mouths call to protect ourselves against the attack planned in advance to devour the holy city, taking advantage of the current Arab weakness," read the article.