On October 18, 2015, the day set as Adoption Day for the Joint Comprehensive Plan of Action (JCPOA), the Iranian leadership continues to come out with statements opposing Iran's approval of it.

In the past few days, Iranian officials have clarified that Iran's Majlis, Supreme National Security Council, and Guardian Council have not approved the JCPOA; Supreme Leader Ali Khamenei tweeted, and posted on his Facebook page, an announcement titled "Negotiation With America Is Forbidden"; and other Iranian officials have stated that Iran is expecting the U.S. to announce that the sanctions have been terminated, not suspended as the JCPOA stipulates. 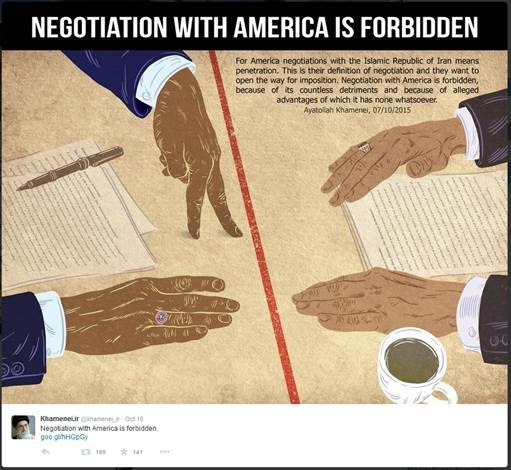 Khamenei's Facebook and Twitter announcement: "For America negotiations with the Islamic Republic of Iran means penetration. This is their definition of negotiation and they want to open the way for imposition. Negotation with America is forbidden, because of its countless detriments and because of alleged advantages of which it has none whatsoever." @Khamenei_ir, October 16, 2015.

The following are statements by Iranian officials on the matter:

Guardian Council secretary-general Ayatollah Jannati said in his October 16, 2015 Friday sermon in Tehran: "There are those who think that approval by the Majlis means approval of the execution of the agreement in Iran. This is not so. Majlis approval regarding the nuclear agreement is not [approval of] its execution. The nuclear agreement was discussed in the Supreme National Security Council and council members expressed their opinion about it and gave their approval regarding its execution. But Leader [Khamenei] still has not signed it. The Majlis's work concerns the framework of the nuclear agreement, that is, it places on the government the responsibility for carrying out the reciprocal steps in exchange for America's steps...

"Caution should be taken, because the side that we are facing [i.e. the  U.S.] customarily breaks its promises and does not keep them. What the P5+1 does in the matter of executing the nuclear agreement must be examined...

"If we do not stand fast against the other side, then the next day they will say that we must officially recognize Israel, give equal rights to men and women, cancel executions, sever relations with Hizbullah, and so on."[1]

On October 17, 2015, Guardian Council spokesman Nejatollah Ebrahimian said: "The [Guardian] Council did not approve the JCPOA, but rather the Majlis plan on the JCPOA. This means that neither the Majlis nor the Guardian Council have approved the content of JCPOA [itself] – which constitutes neither opposition nor agreement to the content [of the JCPOA]. The JCPOA remains a political document, not a legal one."[2]

A few days earlier, on October 14, 2015, Majlis speaker Ali Larijani said: "We agreed to the negotiations because we wanted the sanctions on Iran terminated. These negotiations became an agreement, so that the sanctions would be terminated and the nuclear knowledge would continue and not stop... The JCPOA was examined at various conferences, and we explicitly approved it in the Majlis. If the other side does not terminate the sanctions, [the nuclear facility at] Natanz will renew its activity."[3]

He also said, on October 18, 2015: "The JCPOA was not immediately approved in the Majlis; there was a process, and the Supreme National Security Council was involved in this, and eventually this agreement was reached. Some opposed the JCPOA, and some agreed to it, but the strongest opinion was to define a framework and set conditions [for executing the JCPOA], and this opinion was eventually accepted...

"We have not approved the JCPOA in the way that the other side [i.e. the U.S.] has said. We also have not said that it should be executed as is, but rather that the JCPOA should be placed in the framework of the steps taken by the Supreme National Security Council. Ultimately, this council's approvals are sent for the approval of the Leader [Khamenei].

"We felt there was a risk in the matter of the termination of the sanctions, or of their reinstatement by the Western side on various pretexts. In this situation, we must stop the agreement and produce 190,000 [centrifuge] SWU [Separative Work Units] within two years. Additionally, Iran could be threatened militarily, and in this case as well the nuclear agreement must be stopped.

"Likewise, the inspections must be conducted according to international law, and there is an absolute ban on inspections of military centers and national security [sites] except with the approval of the Supreme National Security Council, [and this requires] the ultimate approval of the Leader [Khamenei]."[4]

It's been reported that the deal was never signed. It appears the US et al don't really care, as they're lifting sanctions anyway. Wow. how cool to be a terrorist rogue state and get everything you want by threats and supporting of terror. Obama you're a terrorist too.