by Times of Israel Staff 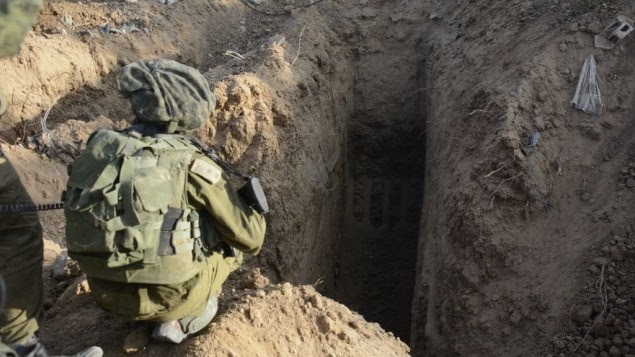 A Hamas tunnel discovered by soldiers from the Paratroopers Brigade in the northern Gaza Strip on July 18, 2014. (IDF Spokesperson/Flash90)


Prime Minister Benjamin Netanyahu responded Sunday to critics charging his government was failing to deal with newly dug tunnels under the Israel-Hamas frontier, threatening to blow up the underground passages if need be.

“We are working methodically and calmly against all threats, including threats from Hamas, both with defensive and offensive measures. And of course, in the event we are attacked from tunnels in the Gaza Strip, we will act very forcefully against Hamas, and with much more force than Operation Protective Edge,” Netanyahu told a conference of Israeli diplomats, referring to the 50-day war in the Gaza Strip in 2014.

Israel Defense Forces officials and southern residents have expressed concern in recent days that Hamas is rebuilding a series of subterranean passages, used for attacking Israel, which were destroyed during the 2014 war between Israel and Gazan fighters.

During that war, Israeli troops uncovered and destroyed dozens of tunnels, but only after Netanyahu approved a ground invasion of the Strip amid heavy pressure from coalition allies to expand what had — to that point — been a ground campaign.

Netanyahu, who is also Israel’s foreign minister, told the diplomats that Jerusalem would have international backing for such a move, and warned Hamas not to “try us.” 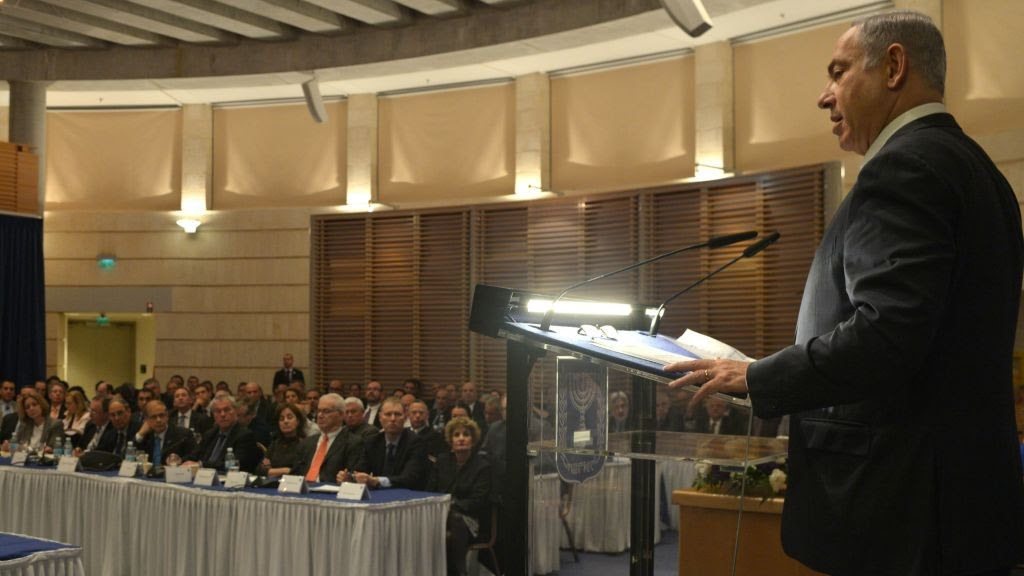 Prime Minister Benjamin Netanyahu speaks at the Conference for representatives and ambassadors of Israel abroad, at the Foreign Ministry in Jerusalem, on January 31, 2016. (Photo by Kobi Gideon / GPO)

Hours earlier, opposition chief Isaac Herzog called for the government to take action and bomb the tunnels, accusing Netanyahu’s cabinet of being “idle” in the face of the Hamas threat.

“The political leadership must provide a clear public answer to the citizens. [It must] stop hesitating…. They must instruct the IDF to bomb the tunnels and destroy this threat. Especially if there are tunnels that have already crossed the border into Israel,” Herzog said.

“Why are we waiting? For terrorists, with their weapons drawn, to emerge in a kibbutz or a moshav? The prime minister and the defense minister must provide an answer to the citizens.

Israeli politicians Tzipi Livni (left) and Isaac Herzog on a tour along the border between Israel and the Gaza Strip, December 11, 2014 (AP/Tsafrir Abayov, File )

“One day, we’ll wake up and discover that, once again, we underestimated the seriousness of the threat,” Herzog warned. “It will cost us in blood and terrible sorrow.”

Last week, a senior defense official said Hamas’s military wing had rehabilitated itself and was ready for a fresh round of hostilities with Israel. Other military leaders have said intensive tunnel rebuilding is underway.

On Saturday, the terror group publicized a new video clip, lauding what it called the unknown fighters who are “toiling day and night” to build the attack tunnels.

Over the weekend, residents of areas near the Gaza Strip complained that tunnel digging into Israel from the Hamas-run territory has come so close to their homes that it has caused their floors to shake.

Palestinian militants from the Islamic Jihad’s armed wing, the al-Quds Brigades, squat in a tunnel as they take part in military training in the south of the Gaza Strip, on March 3, 2015. (AFP/Mahmud Hams)
The head of the Eshkol Regional Council, Gadi Yarkoni, told Israel Radio that many residents have been complaining of hearing — and feeling — increased underground digging activity in recent weeks. In addition, they were disappointed that the IDF has failed to build protective barriers against the cross-border terror tunnels — as it had promised it would after the summer 2014 war in Gaza.

Hamas, the Islamist terror group that rules the Gaza Strip, built dozens of tunnels into Israel, many of which were used to carry out attacks against soldiers during the 2014 war. The IDF said it destroyed over 30 tunnels during the war, and some officials said the army was surprised at the extent of the tunnel building.

A number of tunnels were used during the war to attack army installations. The IDF later said the tunnels had been dug as part of a plan to carry out a massive attack against an Israeli community, but when war broke out, Hamas fighters abandoned the plot.