"Stomp on the heads of the Jews."

The sharp spike in violent Palestinian attacks against Israelis in the past week triggered many responses on social media. Palestinian social media accounts featured new hashtags such as "rage for your honor" and "the return of [Intifada] operations," as well as hashtags that were launched with the start of the current Palestinian wave of violence on October 2015, such as "Al-Quds Intifada" and "the Intifada continues."

As during previous spikes of violence in the past year,[1] Facebook pages of Palestinian towns and neighborhoods posted photos and footage from the scenes of attacks, as well as graphics and messages praising the perpetrators. Facebook pages associated with Hamas also posted calls for additional attacks.

The following are examples of messages and images posted on social media over the past week:

The Hamas daily Al-Risala posted a cartoon on its Facebook page titled "The Intifada continues in Jerusalem and the West Bank" showing a knife as a gear stick in "drive" mode: A Gaza-based Facebook page posted an image of a car running over praying Jews in Jerusalem with the caption: "Our martyrs are in heaven and their murderers are in hell. This is what we were told by the Prophet, peace be upon him."

The Facebook Page "Sons of Al-Aqsa," which uses a Hamas logo as its profile picture, posted an image of a rifle and bullets with the caption: "Rage for your honor. Fire your bullets and make them a herald of death with a thousand messages in its folds." 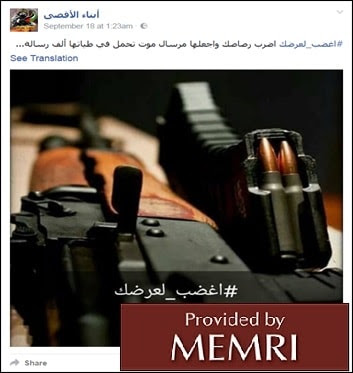 The same page also featured a poster captioned "the Intifada continues" with the message: "Youths call to declare Tuesday [September 20] a day of rage and [to conduct] a general strike in the Hebron province. #share #rage_for_your_honor." 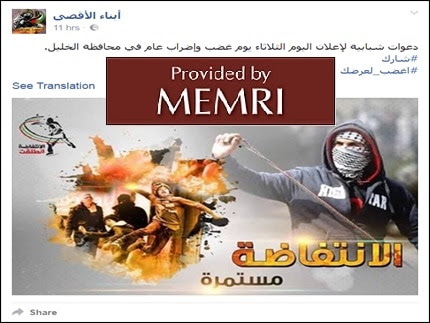 A Facebook page belonging to an all-girls high school in Rafah featured a poster bearing a Hamas logo that shows an Israeli soldier being stabbed in the back with the text "Stab, son of Hebron!" The poster was accompanied by the message: "For liberty, we will spill blood; for the homeland, we will sacrificemartyrs; we will strike you and stomp on your heads, oh cowardly Zionists." The Facebook page "heroics of a jihad fighter" posted the following image with the caption: "Stab, as your knife has made us love knives; stab and do not fear the oppressors; stab for the oppressed; stab so Palestine may live; stab, since the enemies will leave and we will stay." 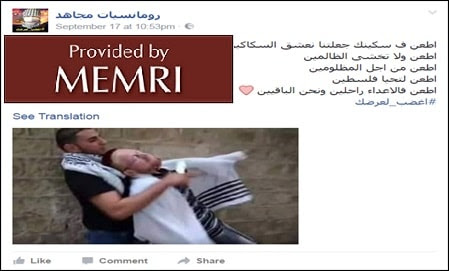 The Facebook page " youth of Jerusalem" posted an image showing a masked man wielding a knife and a rock wearing a shirt with a map of greater Palestine and the text "all the land." The accompanying message says: "What is left is to stab you, [which is an act] that smacks of honor, and the sweetness of your fear is the key to victory. Your joy at [the Palestinians'] suffering will not last, oh [Israeli] settlers.
#Revenge_will_come." 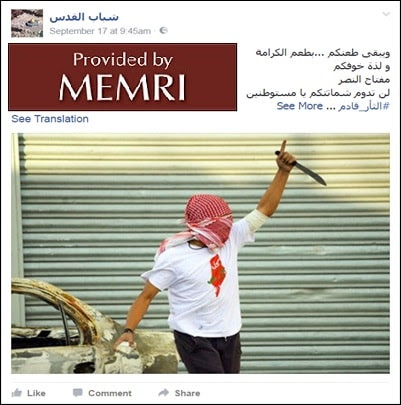 The same Facebook page posted another image titled "victory begins with the knife." The image was accompanied by the caption: "Stab, stab, stab. The glory of the knives continues. [The knives] will scorch the hearts of the settlers."

Facebook user Raji Hamad posted an image with the text: "Rage for your honor and break the hand that reached for her braids and hair."

A poster on the Facebook page "The Martyr Muhannad Al-Halabi"[2] is captioned: "Rage for your honor. Muhannad is not dead. There are hundreds behind him." The Facebook page "the Intifada continues" posted an image of a child holding two knives with the text: "Our choice is liberation." The image was accompanied by the caption: "Stomp on the heads of the Jews."