Demonstrations in Iran Reflect the Strength of US Alliances - Hillel Frisch 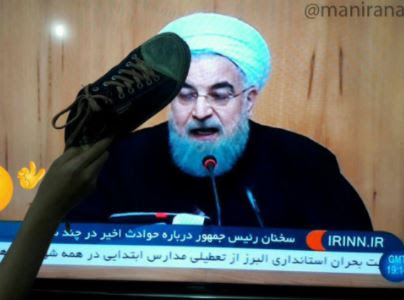 EXECUTIVE SUMMARY: The chants being shouted in Mashhad and Tehran to protest the regime’s dissipation of resources on distant battlefields – “No to Palestine,” “No to Gaza and Lebanon – Only Iran is Worth Dying For” – underscore the fact that the US is the only major power to have many allies whose strategic importance is matched by mutual economic benefits.

Sometimes relatively minor events reflect facts of global importance. The chants in Mashhad and Tehran, “No to Palestine,” “No to Gaza and Lebanon – Only Iran is Worth Dying For” to protest the regime’s dissipation of resources on battlefields a thousand kilometers and more from Iran’s borders, rather than allocating them to the hard-pressed citizens back home, are among them.

These demonstrations underscore a major overlooked truth in the global balance of power: namely, that the US is the only power to have many allies whose strategic importance to the US is matched by mutual economic benefits.

All other challengers are saddled with allies that do nothing but drain their treasuries. Hence the demonstrations and slogans in Iran. Tehran is trying to project power abroad at the cost of arousing domestic opposition, a dangerous prospect. Non-democratic states, even when powerful, are not supple enough to absorb such opposition.

Compare Iran to the US in this regard.

The US was engaged in $3.6 trillion of trade in 2014, or just over one-fifth of its GNP. Thirteen of its twenty biggest trading partners are states formally allied to the US as part of the NATO alliance (Germany, the UK, France, Italy, and others), or those that have in recent years become strong informal allies, such as India and Vietnam. The latter was even a warring enemy in the past.

Significantly, the three largest trading partners of the US in the Middle East are Israel, Saudi Arabia, and the United Arab Emirates. The Iranian-led alliance perceives these three countries as its deadliest foes.

For Iran, Syria and Yemen are battlegrounds that drain resources with little or no offsetting economic benefits. The $300 million trade between Iran and Syria, mostly to Iran’s benefit, hardly offsets the costs of subsidizing the regime. Actual figures are impossible to get, but the CIA in 2012 reported an $11 billion surplus at the outset for Syria, which during the first year of the civil war was reduced by slightly over $2 billion to finance the Assad regime. By extrapolation, one can infer that after the fifth year, Iran began stepping in to prop up the regime. Such a sum is more than Iran spends on its own public health system. And this does not include the costs of direct Iranian involvement or subsidies to Hezbollah, the Iraqi militias, and Afghani mercenaries.

Tehran’s economic predicament in Yemen is even more one-sided. There are no figures on Iranian-Yemeni trade because they have been so insignificant. Today they are probably nonexistent.

The relationship repeats itself in the case of China and Russia. China’s only staunch allies, North Korea and Pakistan, drain Chinese resources with little economic advantage accruing to the greater power. China, unlike Iran, is a major leader in international trade and economic growth, which allows it to bear the costs of subsidizing these states. It also does not bear the costs of actual warfare.

For Russia – the economy of which is roughly equal to that of Italy and smaller than that of Canada – its allies are more costly relative to its economic power. Syria and Moldova are hardly economic partners whose benefits offset the costs of Russian support. Putin might find himself in the same predicament as the Iranian leadership.

A common thread linking all the US’s failed foreign adventures, including Iraq, was that the allies and battlefields drained resources well beyond the economic benefits the US derived from them. In Iraq, the US spent at least $100 billion on average between 2003 and 2011, when the revenues of Iraqi oil (which went to financing the Iraqi state) never reached this figure – and in any case never found their way to US Treasury coffers.

Only the US has so many allies whose economic benefits augment their strategic value. Some of these states – Japan, the richer members of NATO –might be free-riding on the American security umbrella rather than fully paying for it, but the costs of such free-riding are a fraction of the benefits derived from trade and scientific interchange.

The protests in Mashhad and Tehran not only encourage those regional inhabitants who fear the volatile mix between Shiite extremism and imperial ambitions, but also reflect the continued strength of the Western alliance.