A Chinese-owned firm with operations in Washington D.C. hacked Hillary Clinton's private server "throughout her term as secretary of state and obtained nearly all her emails," reports the Daily Caller's Richard Pollock.

The Chinese firm obtained Clinton’s emails in real time as she sent and received communications and documents through her personal server, according to the sources, who said the hacking was conducted as part of an intelligence operation.
The Chinese wrote code that was embedded in the server, which was kept in Clinton’s residence in upstate New York. The code generated an instant “courtesy copy” for nearly all of her emails and forwarded them to the Chinese company, according to the sources. -Daily Caller

During a July 12 House Committee on the Judiciary hearing, Texas Rep. Louie Gohmert (R) disclosed that the Intelligence Community Inspector General (ICIG) found that virtually all of Clinton's emails from her homebrew server were funneled to a "foreign entity." Gohmert did not reveal the entity's identity - however he said it wasn't Russia.
A government staff official briefed on the ICIG's findings told the Daily Caller that the Chinese firm which hacked Clinton's emails operates in Washington's northern Virginia suburbs, and that it was not a technology firm - but a "front group" for the Chinese government.
Warnings ignored
Two ICIG officials, investigator Frank Ruckner and attorney Janette McMillan, repeatedly warned FBI officials of the Chinese intrusion during several meetings, according to the Daily Caller, citing a "former intelligence officer with expertise in cybersecurity issues who was briefed on the matter."

Among the FBI officials warned was Peter Strzok - who was fired earlier this month from the agency over anti-Trump text messages he sent while spearheading an investigation of Trump's 2016 campaign. Strzok did not act on the ICIG's warning according to Gohmert - who added that Strzok and three other top FBI officials knew about an "anomaly" on Clinton's server.
In other words; Strzok, while investigating Clinton's email server, completely ignored the fact that most of Clinton's emails were sent to a foreign entity - while IG Horowitz simply didn't want to know about it.

The Intelligence Community Inspector General (ICIG) found an “anomaly on Hillary Clinton’s emails going through their private server, and when they had done the forensic analysis, they found that her emails, every single one except four, over 30,000, were going to an address that was not on the distribution list,” Republican Rep. Louie Gohmert of Texas said during a hearing with FBI official Peter Strzok. -Daily Caller

Gohmert: “It was going to an unauthorized source that was a foreign entity unrelated to Russia.”


Strzok admitted to meeting with Ruckner but said he couldn't remember the "specific" content of their discussion.
“The forensic examination was done by the ICIG and they can document that,” Gohmert said, “but you were given that information and you did nothing with it.”
Meanwhile, four separate attempts were also made to notify DOJ Inspector General Michael Horowitz to brief him on the massive security breach, however Horowitz "never returned the call."
Internal Pushback
In November of 2017, IG McCullough - an Obama appointee - revealed to Fox News that he received pushback when he tried to tell former DNI James Clapper about the foreign entity which had Clinton's emails and other anomalies.
Instead of being embraced for trying to expose an illegal act, seven senators including Dianne Feinstein (D-Ca) wrote a letter accusing him of politicizing the issue. 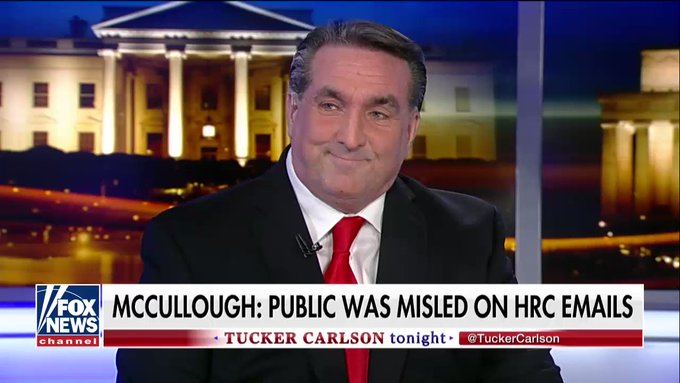 McCullough on @HillaryClinton emails: "Even if the information isn't marked properly when it's disseminated, it's still classified." #Tucker


"It's absolutely irrelevant whether something is marked classified, it is the character of the information," he said.

McCullough said that from that point forward, he received only criticism and an "adversarial posture" from Congress when he tried to rectify the situation.
"I expected to be embraced and protected," he said, adding that a Hill staffer "chided" him for failing to consider the "political consequences" of the information he was blowing the whistle on. -Fox News

30,000+ Hillary Clinton emails were sent to an unauthorized foreign entity, not #RussianHacking


Katica@GOPPollAnalyst
Reminder: IC IG has proof of 30,000+ Hillary Clinton to/from emails going to an unauthorized foreign source, that was NOT #RussianHacking. FBI Lover Peter Strzok failed to act on it.

Someone get this video to @realDonaldTrump!