The internet giant is eliminating conservative voices from the online sphere.

[To learn more about the Freedom Center's recent victory over the Left's censorship attempt, and its call for a coalition across party and ideological lines to defend free speech, click here.]
To paraphrase Captain Renault’s famous exclamation in Casablanca, we are shocked, shocked to find that political bias is going on at Google. Former employee James Damore, the recipient of an Annie Taylor Courage Award from the Horowitz Freedom Center, had already exposed Google’s internal culture of repressive political correctness last year by writing a rather innocuous memo that got him controversially canned. Now a PJ Media report has exposed the internet giant’s efforts to spread that Progressive intolerance throughout the culture at large, and even President Trump has weighed in on the outrageous revelation.
Paula Bolyard at PJ Media experimented with the search engine’s “News” tab by conducting a search for “Trump” and comparing the results to journalist Sharyl Attkisson's media bias chart. She discovered a “blatant prioritization of left-leaning and anti-Trump media outlets,” primarily CNN (again, we’re shocked), and also found that not a single right-leaning site appeared on the entire first page of search results. “Is Google manipulating its algorithm to prioritize left-leaning news outlets in their coverage of President Trump?” Bolyard asked rhetorically. “It sure looks that way.”
She discovered that out of the first one hundred results, “CNN, by a wide margin, appeared most frequently, with nearly twice as many results returned as the second-place finisher, The Washington Post.” Among the other left-leaning sites in those results were NBC, The Atlantic, CNBC, and Politico. “The only right-leaning sites to appear in the top 100 were The Wall Street Journal and Fox News with 3 and 2 results respectively. PJ Media did not appear in the first 100 results, nor did National Review, The Weekly Standard, Breitbart, The Blaze, The Daily Wire, Hot Air, Townhall, Red State, or any other conservative-leaning sites except the two listed above."
CNN accounted for nearly 29 percent of the total article results, and left-leaning sites together made up 96 percent of the total results, Bolyard calculated. Google has brushed off accusations of steering its search results leftward before (as well as using its fact-checking feature to target conservative media almost exclusively), but this is undeniable and overwhelming bias.
In response to the PJ Media article, on Tuesday morning President Trump tweeted, 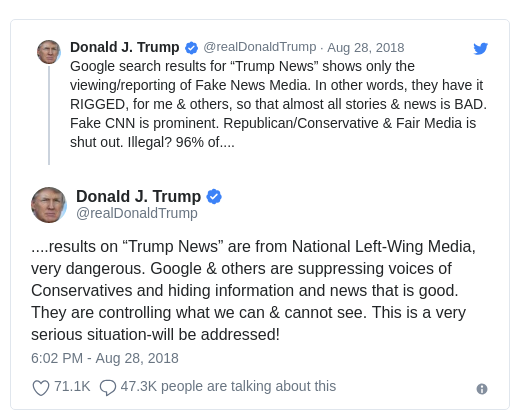 “Search is not used to set a political agenda and we don’t bias our results toward any political ideology. Every year, we issue hundreds of improvements to our algorithms to ensure they surface high-quality content in response to users’ queries. We continually work to improve Google Search and we never rank search results to manipulate political sentiment.”

But a Search Engine Optimization company in San Francisco called Can I Rank also found an anti-conservative bias in Google search results. "Among our key findings were that top search results were almost 40% more likely to contain pages with a 'Left' or 'Far Left' slant than they were pages from the right," the company found. "Moreover, 16% of political keywords contained no right-leaning pages at all within the first page of results":
The company's research turned up no right-leaning sites in the top results for keywords like “minimum wage,” “abortion,” “NAFTA,” “Iraq war,” “campaign finance reform,” “global warming,” “marijuana legalization,” and "TPP."
"No attempt is made to present multiple viewpoints on controversial political issues, and the algorithm in its current form does not return results equally distributed across the entire political spectrum."
Breitbart News performed a similar investigation and got similar results: “over the first five pages of Google News results for ‘Trump,’ CNN was the most-listed outlet, featured twenty times”:
This was followed by the New York Times (eight times), the Guardian (seven), the Washington Post(seven), the BBC (six), USA Today (five), CNBC (four), HuffPost (three), Financial Times (three), Fox News (three), the Atlantic (three), Vox (two), CBS News (two), and the Wall Street Journal (two).
Business Insider, the Independent, Wired, ESPN, the Daily Beast, NPR, Bloomberg, the Hill, ABC News, NBC News, People Magazine, TIME, Reuters, Vanity Fair, Global News Canada, the Telegraph, FiveThirtyEight, NewsHub, and Factcheck.org were included once throughout the five pages.
Conservative media including Breitbart News, the New York Post, the Daily Caller, PJ Media, and Independent Journal Review were all entirely absent. [emphasis in original]
The PJ Media article quoted Bloomberg columnist Leonid Bershidsky as saying, "Google's search algorithms are a black box to the public. People inside the company can mess with them without telling us, potentially imposing their internal culture on millions of searchers who have no reason and no desire to share it." And the piece also quoted PJ Media founder Roger L. Simon as declaring that social media monopolies “are far worse than the original monopolies like International Harvester and Standard Oil and far more dangerous because they monopolize not just our industries but our brains. They control, or at least inordinately influence, how Americans and even much of the world think."
Those leftist social media monopolies have ramped up their attempts to stifle conservative speech by “deplatforming” right-wingers. Conservative YouTube stars such as Dave Rubin have had their accounts demonetized. The enormously popular Prager U. videos temporarily disappeared from Facebook. The Freedom Center’s Director of JihadWatch.org, Robert Spencer, recently had two of his funding pages shut down by Mastercard. David Horowitz’s own Twitter account was temporarily locked down. Not to mention the concerted social media blockade against Alex Jones and InfoWars.
The good news is that the David Horowitz Freedom Center won a major battle against such repression last Friday, reversing a decision by Mastercard to refuse to accept online donations to the Freedom Center because it had been labeled a “hate group” by the leftist smear organization, the Southern Poverty Law Center (SPLC), and by a similarly leftist group called Color of Change.org. Mastercard initially didn’t even bother to announce its decision to the Freedom Center, much less give us an opportunity to defend ourselves. But massive support from other major conservative entities such as Breitbart, Rush Limbaugh, Newsmax, OAN, The Daily Caller, Ricochet, and others seemed to force Mastercard to back down.
As noted at FrontPage Mag, “This campaign [to deplatform conservatives] is masterminded by two George Soros-funded organizations-- Media Matters, which has waged a holy war against conservatives in the media for two decades, and The Southern Poverty Law Center (SPLC), which has managed to get itself taken seriously as an authority on ‘hate speech’ and ‘hate groups’ by a credulous and collaborative mainstream press”:
The Southern Poverty Law Center has gotten away with this hatred masquerading as anti-hate for far too long. The SPLC recently paid a $3.4 million settlement to Majid Nawaz, a devout Muslim and also a fierce critic of Islamic terrorism after it labeled him an “anti-Muslim extremist.”  All the other dozens of conservative groups similarly slandered should be developing their own legal defense funds to go after this reckless and mendacious organization and its enemies list.  The David Horowitz Freedom Center certainly is.
The left is waging a tireless war against free speech. It does not control the political sphere, so it cannot enforce censorship through the government. It does largely control the culture, however, so the leftists at Media Matters and the SPLC, Facebook and Twitter, and Google are now brazenly using that significant cultural leverage to minimize and demonize the voices of conservative individuals and organizations, choking them off financially if need be. But as the Freedom Center and its supporters proved last week, the right is prepared to take the fight to them and shut down their totalitarian agenda.