The Nation-State Law is meant to ensure that Israel is not sacrificed on the very same altar on which Europe is committing suicide. 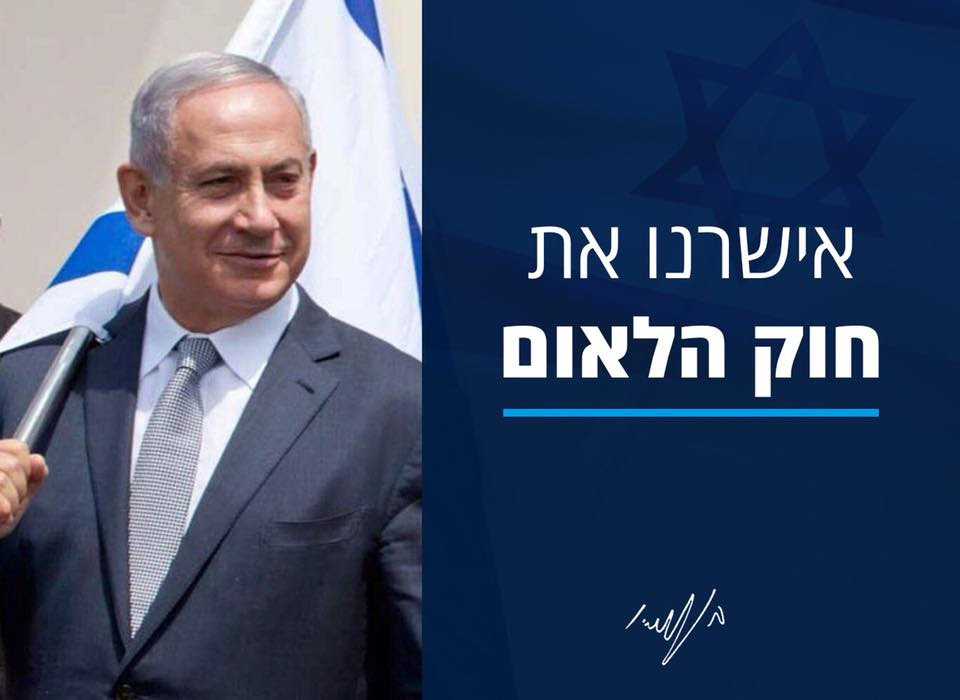 
BESA Center Perspectives Paper No. 928, August 21, 2018
EXECUTIVE SUMMARY: Much has been published against the new Israeli Basic Law: Israel as the Nation-State of the Jewish People. Many, both in Israel and abroad, ask: Why is it necessary? How can it comport with democracy? Where does it leave minorities, particularly Muslim-Arabs, who make up some 20% of the Israeli population?
In order to understand the need for the new Nation-State law, we must understand the challenges to Israel’s existence in the Middle East. First of all, there is the religious aspect. According to Islam, Judaism and Christianity are din al-batel (religions of falsehood) while only Islam is din al-haqq (religion of truth). Judaism has been null and void ever since Islam came to the world, so there is no reason to establish a Jewish state.
In addition, according to Islam, Jews (and Christians) should live under Islamic rule as dhimmis (“protected as long as they behave according to the rules of Islam”) and “pay the Jizya out of hand while they are utterly subdued” (Koran 9:29). Thus, Jews have no right to a state, army, or police, and should live in a state of perpetual humiliation at the mercy of Muslims.
Next is the national aspect. The fact that Israel is the nation-state of the Jewish People is rejected by all of Israel’s Arab neighbors without exception. Consider, for instance, Article 20 of the Palestinian National Charter, which says (with my interpretations in italics):  “The Mandate for Palestine, and everything that has been based upon it” (international decisions to establish a Jewish State) “are deemed null and void. Claims of historical or religious ties of Jews with Palestine are incompatible with the facts of history and the true conception of what constitutes statehood” (there is no Jewish history in the Holy Land). “Judaism, being a religion, is not an independent nationality. Nor do Jews constitute a single nation with an identity of its own; they are citizens of the states to which they belong.” (Therefore we Jews should leave our forefathers’ land and go back to Poland [Auschwitz], Germany [Dachau], Iraq, Morocco…)
The new law is meant to make it as clear as possible that the Jews are a nation. As the new law states, “The Land of Israel is the historical homeland of the Jewish people in which the State of Israel was established; the State of Israel is the national home of the Jewish people in which it fulfills its natural, cultural, religious and historical right to self-determination; and the right to exercise national self-determination in the State of Israel is unique to the Jewish people.”
Just as Italy is the nation-state of the Italian people and France is the nation-state of the French people, Israel is the nation-state of the Jewish People.
There are, nevertheless, Israeli Jews who oppose the Nation-State Law for various reasons. The first is a political reason: Because many on the left side of the political map do not like Benjamin Netanyahu in general, they oppose everything he and his coalition do as a matter of course.
The more important reason is what has happened since the 1990s, when Aharon Barak was Chief Justice of the Supreme Court. Starting in 1992, Barak focused on advancing and shaping Israel’s Constitutional Revolution (a phrase he coined), preferring and advancing human rights at the expense of the Jewish character of the state. The best example of this revolution was what happened with the Arab al-Ard Movement, the aim of which was to abolish Israel’s Jewish nature (i.e., subvert the State of Israel). Al-Ard tried to run for the Knesset (the Israeli Parliament) in 1965 but was rejected by the Supreme Court. Thirty-one years later, in 1996, the Supreme Court under Barak allowed the Balad party to run for Knesset although it had and still has a similar platform to that of al-Ard in the 1960s.
Israel also has its share of multicultural acolytes who naturally oppose the law. When Israelis see the damage wrought on Europe by multiculturalism, they want to ensure that they are as far removed as possible from this destructive idea. If Europeans are bent on committing cultural suicide, it is of course their prerogative to do so. But Israelis do not wish to lose their national identity, their ancestral homeland, their state, and their culture. The Nation-State Law is meant to ensure that Israel is not sacrificed on the very same altar on which Europe is committing suicide.
View PDF
BESA Center Perspectives Papers are published through the generosity of the Greg Rosshandler Family
Dr. Mordechai Kedar is a senior research associate at the Begin-Sadat Center for Strategic Studies. He served for 25 years in IDF military intelligence specializing in Syria, Arab political discourse, Arab mass media, Islamic groups, and Israeli Arabs, and is an expert on the Muslim Brotherhood and other Islamist groups.