Former Iranian MP Faezeh Rafsanjani suggests that the Iranian constitution be reformed to decentralize power and to clearly define the Supreme Leader's authority.

During a comprehensive interview posted online, former Iranian MP Faezeh Rafsanjani said that Iranian President Rouhani's government has little authority because Supreme Leader Khamenei supervises most of its institutions, and that the IRGC interferes whenever the government tries to make changes. Rafsanjani, a leading human rights activist, a journalist, former Majlis member, and daughter of former Iranian president Hashemi Rafsanjani, said in the interview that one of the problems in Iran is the centralization of power. She suggested that the Iranian constitution be reformed to decentralize power and to clearly define the Supreme Leader's authority. She added that Iran has a "problem with [its] foreign policy," saying: "We expect America to relinquish its enmity towards us, but in meantime, have we relinquished our enmity towards America?" Rafsanjani stated that Iran's relationship with the U.S. should be like with every other country. The interview was posted on aparat.com, an Iranian video-sharing service, on September 8.
Click here to view this clip on MEMRI TV
Faezeh Hashemi Rafsanjani: "We don't have a single Sunni military commander."
Interviewer: "We do."
Faezeh Hashemi Rafsanjani: "No, we don't."
Interviewer: "There is a governor…"
Faezeh Hashemi Rafsanjani: "Only in the [Sunnis'] own city. It's not a big feat when it is in their own city. In Tehran, we don't allow there to be a single Sunni school principal. We don't allow there to be a single Sunni mosque in Tehran. We don't have a single Sunni government minister or governor.
[…]
"What authority does our reformist government have? Look at Mr. Rouhani. There are so many institutions… This is a structural problem as well. Since so many institutions are supervised by the Supreme Leader [Khamenei] – first and foremost the IRGC… Do they really let the government do anything? 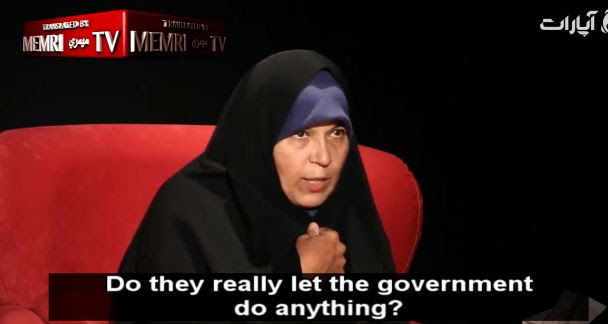 "They interfere in everything that the government tries to do. How come the IRGC has authority in economic and political issues? How come they can make arrests when we have the judicial branch and the intelligence ministry? 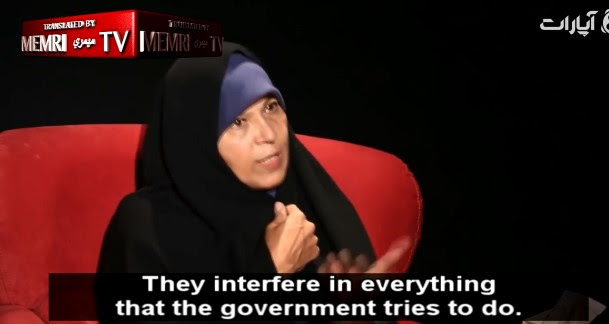 […]
"Wherever the government tries to change its mode of operation, the IRGC or some other force shows up and takes over. So what is the government supposed to do?

[…]
"Some holy words make people sacred, and you are not allowed to criticize them.
[…]
"The centralization of power is a mistake. Giving all the authority to one person is a mistake. I have a problem with this. In my view, one of the things in our constitution that needs to be reformed is that we need to decentralize power.

"We have a Supreme Leader? No problem. But his authority needs to be clearly defined and exist alongside the authority of others. But it’s a problem when all the power is held by the Leader.

[…]
"Look, like everybody else, I believed that an Islamic republic could be successful."
Interviewer: "Do you think that it has been unsuccessful?"
Faezeh Hashemi Rafsanjani: "Not only do I think that it has been unsuccessful, but I believe that it has ruined Islam, because all of the government's mistakes have been in the name of Islam, and I believe that these mistakes have nothing to do with Islam.
[…]
"Take for example, the mandatory hijab. Mandatory hijab is nowhere in Islam, yet you force women to wear the hijab.
[…]
"We have a problem with our foreign policy, and in my opinion, we should be critical of this issue. We expect America to relinquish its enmity towards us, but in the meantime, have we relinquished our enmity towards America?
[…]
"We are doing everything we can against America. We prevent Rouhani from [going through] the nuclear deal, yet we expect America to refrain from acting against us. It's not Obama's America anymore. We didn't appreciate Obama at the time, and now we have Trump. Trump's policy is very harsh and aggressive. Ultimately, we have to do something."
Interviewer: "The last part is not a question. I summed up…"
Faezeh Hashemi Rafsanjani: "I believe that we need our relations with the U.S. to be like with any other country." 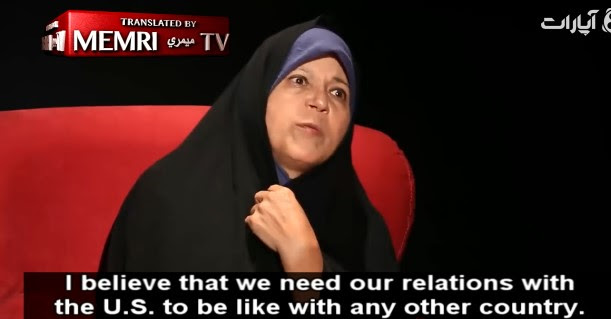