The Real Face of the Muslim American Society - Benjamin Baird

Fresh from its lobbying activities at the National Muslim Advocacy Day on Capitol Hill, where a coalition of Islamist groups scored personal face time with nearly 200 members of Congress, the Muslim American Society's (MAS) Milwaukee chapter just completed its 13th annual conference, called "Jannah: the Ultimate Prize" — a reference to the rewards of the hereafter.
As part of the United States Coalition of Muslim Organizations (USCMO) visiting Washington on April 1st and 2nd, MAS delegates speciously presented themselves as the moderate representatives of American Muslims. However, the veil was once again lifted last week when MAS invited a hardline coterie of Islamist clerics, professors, and polemicists to address its annual Milwaukee convention.
MAS was founded in 1993 as the "overt arm of the Muslim Brotherhood in America," a transnational Sunni Islamist organization that is the progenitor of terrorist outfits such as Hamas. Nonetheless, MAS lobbyists such as national director Ayman Hammous were welcomed with open arms in Washington by a bipartisan range of unsuspecting lawmakers.
The most senior MAS official to speak at the Milwaukee convention on April 26th and 27th, Hammous was photographed just two weeks earlier rubbing elbows with recidivist anti-Semite Rep. Ilhan Omar (D-Minn.) during Muslim Advocacy Day. Hammous was also spotted with USCMO Director Oussama Jammal, a longtime Islamist and fundraiser for terrorism financier Sami al-Arian, as well as Zahid Bukhari and Nakibur Rahman, two Islamic Circle of North America (ICNA) affiliates who openly support Jamaat-e-Islami, a violent South Asian Islamist movement to which ICNA belongs.
Early MAS leaders have been implicated in their own terrorism financing schemes and recruiting efforts. MAS co-founder Jamal Balawi was listed as an unindicted co-conspirator in the Holy Land Foundation trial for providing material support to Hamas, a U.S.-designated foreign terrorist entity. Additionally, former MAS spokesman Randall Royer, a member of the infamous Virginia Jihad Network, was arrested in 2003 for recruiting jihadists to train at Lashkar-e-Taiba camps in Pakistan.
However, speaking at Milwaukee's Crowne Plaza on April 26th, Yaqeen Institute founder and keynote speaker Omar Suleiman dismissed complaints that these early Muslim leaders "who came to this country and established Islamic organizations" were too "regressive" and "weren't thinking straight."
"We are on their shoulders," Suleiman said. "I never allow anyone from my students, from my group, to insult the efforts of our predecessors. You don't get to do that. They were imperfect, because they're not perfect people. But they were committed. They were dedicated," he added.
As it happens, Suleiman was only parroting statements he made as recently as 2016, when he lamented before a Muslim youth conference that America "used to have serious ulema [clerics] coming from all over the world to this country, having major conferences ... I'm not even going to say their names," he said, "because they're banned now." 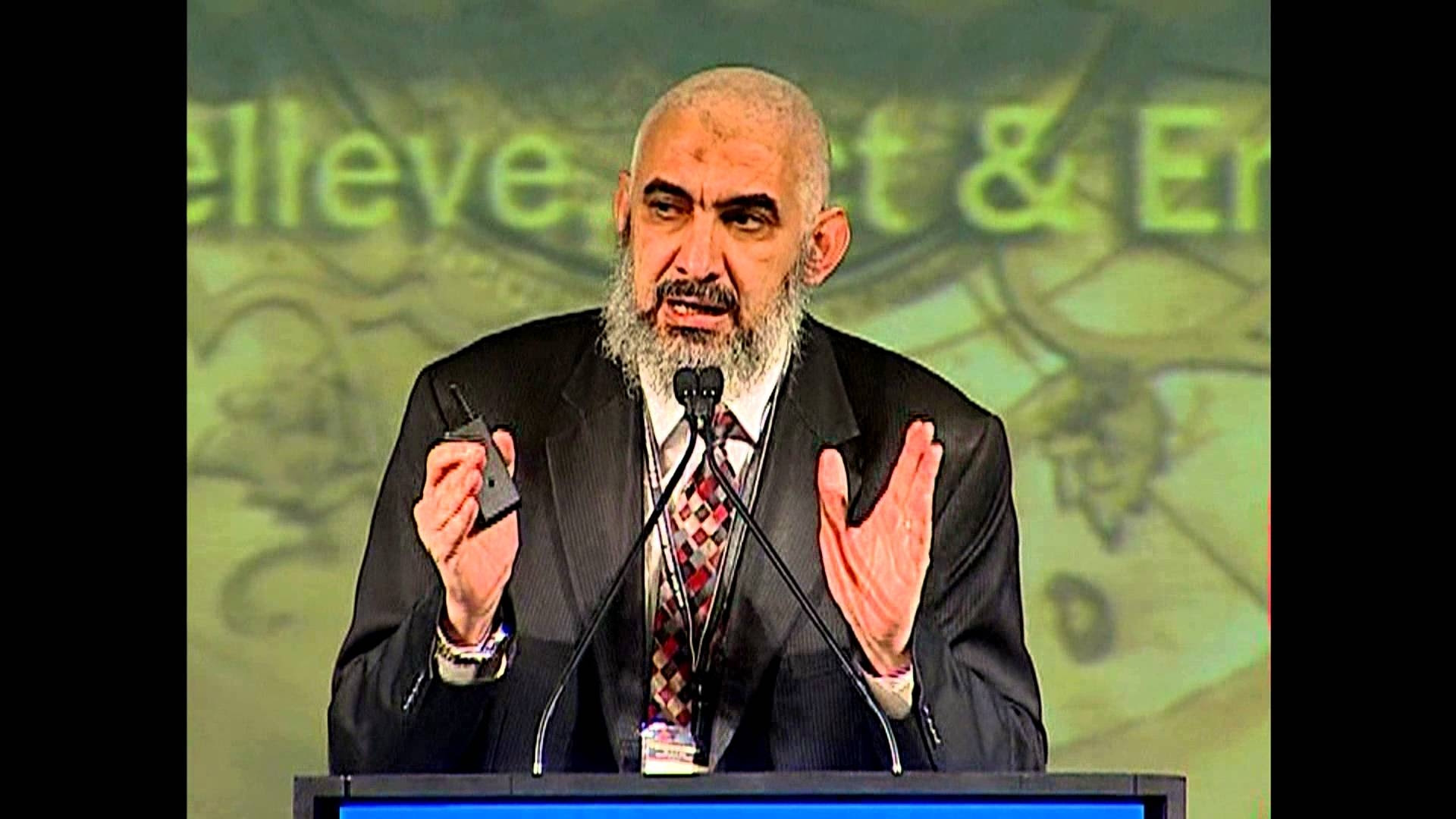 Fortunately for Suleiman, "serious" Islamist scholars like Ragheb Elsergany still slip through the cracks every now and again. Unapologetically anti-Semitic and militantly pro-jihad, Elsergany has twice prompted MAS-ICNA convention organizers to apologize for his extremist speeches and pledge to ban him from future conferences. And yet, at its April conference, MAS-Milwaukee ignored this moratorium and invited Elsergany to its stage.
Speaking at a 2009 MAS conference, Elsergany glorified jihad and beseeched the audience to earn Allah's favor by "supporting the fighters, and the mujahideen [Islamic warriors] and the besieged, and those in need there in Palestine." He solicited donations and shamed his listeners for abandoning the Palestinians. "They are the ones who face the Zionists with their chests, their nerves, their lives, their children, their holy places and their sacred places," Elsergany said.
Despite receiving complaints, Elsergany was invited back to the annual MAS-ICNA convention in 2011, where he relished the rise of Islamist regimes across the Middle East and North Africa, which would cause "the Zionist entity" to "vanish absolutely." Inspired by the Muslim Brotherhood's political ascension in Cairo, Elsergany predicted that "all the lands usurped from the Muslims," would be reclaimed.
No Muslim Brotherhood-affiliated convention featuring anti-Semitic speakers would be complete without a speech from University of California-Berkeley professor and Zaytuna College co-founder Hatem Bazian. In 2004, Bazian was filmed at a Berkeley anti-war rally calling for an "Intifada," or violent uprising, in the U.S. An ethnic studies professor who pioneered Berkeley's Islamophobia Research and Documentation Project, Bazian has been rebuked by university administrators for twice retweeting anti-Semitic images that accuse "Ashke-Nazis" – a derogatory term for Jews -- of rape, murder and organ trafficking.
Besides founding the first Islamic college in the U.S., criticized as a center for Islamist "indoctrination," Bazian is credited with starting Students for Justice in Palestine (SJP) and American Muslims for Palestine (AMP), two closely coordinated groups accused of being part of a "U.S.-based Hamas support network."
In fact, Bazian told his Islamist colleagues in a Yahoo messaging group in 2006 that an upcoming MAS-Milwaukee convention would be an ideal location "to meet for AMP business." In recent court documents linking AMP to the terror-tied Islamic Association of Palestine (IAP), the Milwaukee conference was described as an "IAP reunion."
In this regard, Milwaukee's annual convention hasn't changed. Bazian shared the stage with AMP National Policy Director Osama Abu Irshaid, who previously served as the editor of Al Zaytounah, IAP's official newspaper. Abu Irshaid is an outspoken cheerleader for Hamas, praising the Palestinian terrorist entity's "steadfastness and sacrifice" and calling its fighters "an army for liberation" who "rise up for the blood of martyrs." 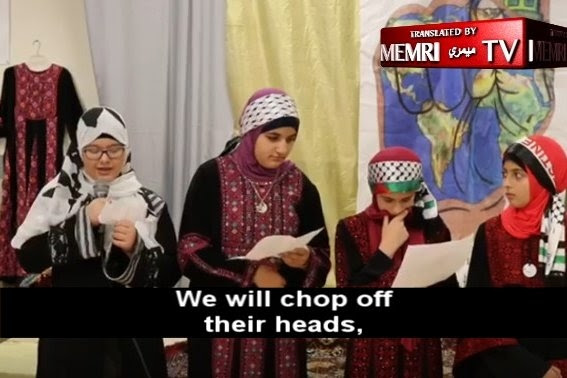 If publicly sympathizing with a genocidal terrorist faction isn't alarming enough, MAS chapters have been exposed conferring those same appalling convictions upon impressionable young minds within their congregations. At a MAS-sponsored "Ummah Day" celebration in Philadelphia on April 17th, adolescent boys were recorded lip-syncing a pro-jihadist song which promised to "crush the traitor" Israel. In a separate performance, a pre-teen Muslim girl read from a script: "We will chop off their heads ... and we will subject them to eternal torture," she recited, referring to Israeli Jews.
On the national stage, MAS affiliates present a carefully curated public image, co-opting mainstream progressive principles when it is politically expedient. Once they are a safe distance from Washington, however, MAS officials revert to their Islamist roots, and chapter conferences function as de facto Muslim Brotherhood reunions. Rather than courting its representatives, U.S. lawmakers should permanently close the door on this social club for radical Islam.

Benjamin Baird is a Fellow of Islamist Watch, a project of the Middle East Forum