A strategic move that already is paying big dividends.


It’s unfortunate that live coverage of President Trump receiving what AP calls “adulation from a massive, colorful crowd” of 125,000 took place during the wee hours of the morning for most Americans. But the consequences of his roughly 36 hours in India will be long lasting and important. He is about to retire for the night in New Delhi after the enormous rally in Ahmedabad, the economically advanced capital of the state Gujarat, Prime Minister Modi’s home turf, and a quick visit to the Taj Mahal.

However personally gratifying it may have been to equal the overseas crowds Barack Obama was able to draw in Berlin, giving the lie to media claims that Trump is hated overseas, this visit has some very serious goals that are being accomplished. First of all, a trade agreement that lowers India’s high tariffs on American exports, a relic of the days of import-substitution manufacturing by an impoverished India. Now, the United States has become India’s number one export market, and Trump has plenty of leverage to use in lowering those barriers and rapidly increasing American sales to the subcontinent. India’s population is predicted to surpass China’s in the near future, meaning that Indian markets can pick up the slack if China falters under the weight of coronavirus.
Equally or more important in the longer run is the strategic import of a solid US-India strategic relationship, including arms sales to India, which are another important agenda item in the Trump-Modi talks slated for tomorrow. India is a critical strategic counterbalance to China’s efforts to dominate Asia and its oceans. Having India as a stronger partner implicitly strengthens Trump’s hand in dealing with Xi Jinping and trade and power politics, such as China’s aggressive moves to claim as sovereign territory and military bases coral reefs in the South China Sea.
India is a Hindu-majority country with a very large minority population of Muslims, mostly peaceful, but with frequent confrontations with its Muslim neighbor Pakistan over disputed land in Kashmir, and occasional bouts of terror attacks. Trump and Modi are affirming our cooperation against radical, while attempting to maintain relations with Pakistan.
Domestically, Trump is making a strong play for the votes of Indian-Americans, a group reckoned to number close to 5 million, and growing very rapidly – 38% between 2010 and 2017. Recall that his stadium rally in India, called “Namaste, Trump” is a mirror of the “Howdy, Modi” rally in Houston, attended by at least 50,000 Americans, mostly of Indian descent.
With Trump triumphing so visibly, the Trump-hating media are reduced to utterly petty snark, such as this pathetic tweet from CNN 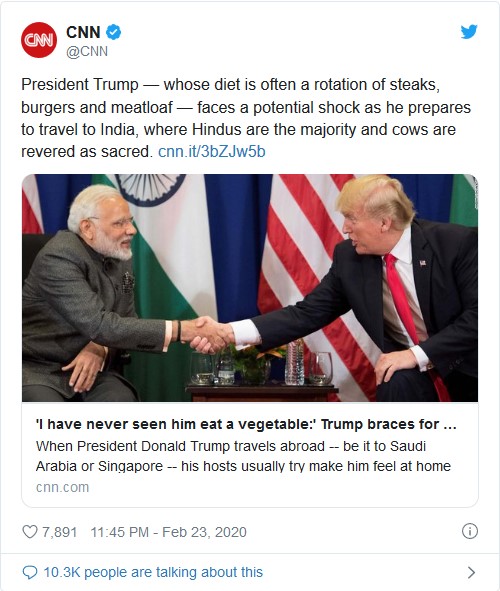 There they go again, sneering at the sort of diet most Americans enjoy, and pretending that Trump, a man with properties all over the world, would face a “shock” discovering that Indians don’t eat beef. As if Indian restaurants are not all over Queens and Manhattan, and Trump, a man of the world, was expecting steak for dinner. Just keep telling us that Trump is stupid because his tastes are similar to those of most people, and that media and political elites are so much more sophisticated that we ought to be grateful for their benevolent guidance.