MEMRI: ElBaradei on the Egypt Uprising

Following are excerpts from an interview with Mohamed ElBaradei, leader of the Egyptian National Association for Change, which aired on ON TV on February 6, 2011.

To view this clip on MEMRI TV, visit http://www.memritv.org/clip/en/2796.htm. 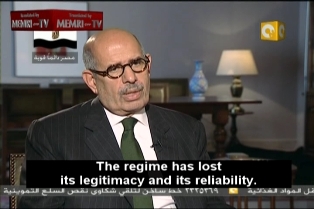 "[Mubarak] Should Leave Office in an Appropriate and Dignified Manner; He Can Remain and Live in Egypt"

Mohamed ElBaradei: "The people waged this great peaceful revolution for the first time in its history, and wants to see a transition from an oppressive dictatorial regime to a democratic regime. [...]

"The regime has lost its legitimacy and its reliability. The [youth] consider President Mubarak to be responsible for that, because this regime was centered around a single person. This was a Pharaonic regime, as I've said in the past. Therefore, the [youth] believe that President Mubarak's retirement in a safe and dignified manner, worthy of the Egyptian president, would resolve many of the problems that we face today, and would lead us to a transitional phase. [...]

"I haven't changed what I say. At the end of the day, he is the president of Egypt, and he should leave office in an appropriate and dignified manner. He can remain and live in Egypt. I've said from day one that the Egyptian people, whose nature I know very well, seeks to move forward, not to settle the score. [...]

"The regime, as you can see, is being eaten away, vaporized. All the leaders of the NDP have resigned. We have seen many ministers taken to court. It is true that the regime has infiltrated everywhere in Egypt, but we shouldn't delude ourselves – the regime was based on President Mubarak, and when President Mubarak retires, we will be able to move to a new phase. [...]

"I am talking about institutions. The personalities are a secondary issue. The question whether someone who was part of the current regime can remain in place is a secondary issue. The change means transforming the Egyptian from being a slave to being free, and replacing the Pharaonic ruler with the sovereign rule of the people. This is a fundamental change in the very foundations of the regime, and the personalities are not what is important." [...]

"The American position has fluctuated over the past 10 days. Let me first say that we should not rely on the American or European position. The change will be carried out by the Egyptians and for the Egyptians, and the world has the right to sympathize with the problem of the Egyptian people. [...]

"Many people have doubts about their reliability, but I say that we must consolidate this in the new constitution, about which all of us, as Egyptians, will agree."

"Obviously, Israel stands to lose from a democratic Egypt, because a democratic Egypt would be a capable country, which would deal with Israel on equal terms. This is what Israel and the West fear. They fear that Egypt, and the Arab world with it, will become a force that would equal them, and would strive to fulfill their interests, instead of making do with their leftovers. [...]

"Like in any other country, the constitution should have 'red lines': There cannot be a fascist party or a religious party, which discriminates among citizens on the basis of creed. We must agree on all this.

"The Muslim Brotherhood knows full well that we disagree on many ideological issues. I am a liberal, while they have a conservative religious source of authority, but they are a part of the Egyptian people, and it cannot be said about them that they are 'a forbidden group." [...]

"Change Must Not be Carried Out Only by the Military Establishment"

"The issue in question today is one of reliability. While the vice president was saying that they would release all political prisoners, they arrested nine young people who came to my home to talk to me. These people were doctors, lawyers, and engineers. When I see the prime minister saying: 'We arrested these people because they came out of the house of someone we have concerns about,' I want to say to him: 'If you have concerns about me, you should know that the people have concerns about all of you as a regime. The people want to topple you.' This reflects the same authoritarian military mentality that we want to replace. Therefore, they still have no reliability.

"I Propose … that there be a Presidency Council Composed of Three Persons, in which Both Civil Elements and the Military Establishment will be Represented"

"Therefore, I propose – as I have been doing from the beginning of the revolution – that there be a presidency council composed of three persons, in which both civil elements and the military establishment will be represented. There will be a caretaker government composed of technocrats, who are not connected to politics in any way – reliable people with experience.

"Then, [in] over a year, we will take the necessary steps in order to hold democratic elections and parliamentary elections.

"This could be part of a deception. This is not only my opinion. The regime wants to reorganize, and then it will return to its old habits. I haven't heard anyone talk about the right to form political parties. [...]

"We haven't heard anything so far about issues that are essential, like international monitoring [of the elections], an independent judicial committee to supervise the elections, the right to form political parties, or the abolishment of the emergency law. All this makes me, as well as many others, wonder whether this is an attempt to thwart the revolution, or whether it is a genuine attempt by what is left of this vaporizing regime to internally reorganize and then become [part] of the Egyptian people again. [...]

"When I hear that representatives of the regime and the prime minister go to Al-Tahrir Square and invite whoever they see there to negotiate – this is no way to run a country. [...]

"Unless we see real and genuine change in the establishment, and not just in individuals, and true participation of the Egyptian people, of the civilians... The army is part of the people, and I have the greatest respect for it, but its mission is to defend Egypt, not to run the country."

"If [the Government] Continues to Suppress this Anger, or Tries to Manipulate It, We will See a Non-Peaceful Revolution"

"In a democratic regime, civilians must be at the forefront. Unless we see that, the demonstrations will continue. [...]

"I am willing to talk to any person who wants to talk to me. As I've mentioned, I am talking with the Muslim Brotherhood, as well as with the Marxist party. I believe that I can talk..."

Interviewer: "Did [VP Suleiman] call you?"

Mohamed ElBaradei: "He did not call me. If he calls me, I will talk with him, but I will say to him exactly what I am saying to you. What I say behind closed doors I say in the open too."

Interviewer: "Do you expect him to invite you, following what you've just said?"

Mohamed ElBaradei: "I've heard that he doesn't want to talk to me. This is up to him, but he should not be the one leading the change. [...]

"Whether or not he talks to me doesn't really matter. I always say Mohamed ElBaradei is not a person, but an idea. I will continue to talk about my ideas home and abroad. As I've said, I want to remain in the position of an observer until Egypt has the kind of regime I've been wishing for my country for many years. If this happens, my last wish will have been fulfilled." [...]