Although I do not generally do so, I will open with an Arabic joke, because in the Arab world (and perhaps in other places as well) people often use humor to speak the truth about reality. I will begin by explaining: In Arabic, the term is "weapon of total destruction" instead of "weapon of mass destruction".

The point of this ironic story is that the Arab world does not need "weapons of total destruction", since even without them the area is in total ruins. The situation of Syria these days illustrates this situation, and in live broadcast. With presidents slaughtering their own citizens in the thousands, and their capitals serving as a front in the battle against them, and the state's military branches fighting against its people, when human dignity - especially that of women and girls - is openly trampled upon and these countries' economies are collapsing, the Arab world is in an advanced state of systemic collapse, "total destruction".

Syria of Asad, Hafez as well as Bashar, created for itself an image of Arab nationalism, a fortress of faithfulness to the Arab interest and the spearhead of the Arab battle against the West in general and against Israel in particular. But now, with all the military strength of the Syrian regime turned against its citizens, it becomes clear that this image was like foam floating on the surface of deep water; a pathetic illusion hiding a dark dictatorship that used - or rather abused - Israel as a cover for the bitter truth: the actual, great, threatening enemy was the majority of the Syrian people, who never saw the regime as legitimate.

The situation in Syria is deteriorating quickly, and the state is literally disintegrating. The cracks in the government are widening; ambassadors, generals and soldiers are deserting, some branches of the Ba'ath party are announcing their secession from the regime, the Russian advisers are fleeing for their lives and the feeling that the end is near is taking hold more and more. Not the end of Asad, but of Syria. Not the regime, but the system. The state is approaching systemic collapse and is sinking in a treacherous swamp of blood, fire and tears, and only the Master of the Universe knows how Syria will emerge from this.

The principal force fighting against the regime is the Free Syrian Army, which is said to be acting under the command of Lieutenant General Riad al-Asad, a deserter from Asad's army. However, the Free Syrian Army, despite the many efforts that Turkey, Saudi Arabia, Qatar, Jordan and perhaps even Western countries invest to consolidate and organize it, is really nothing but an incohesive group of weakly coordinated local militias. Its weapons – mainly automatic AK-47 rifles and RPG anti-tank rockets - are light; its strength is combat in urban areas, where it uses the population as human shields. Since the regime's military can't tell the difference between a fighter and a non-combatant citizen, it commits mass murder in an effort to eliminate as many fighters as it can, who may be hiding among the citizens. Both sides are up to their ears in human rights abuses, and both sides act with determination and without sensitivity, guided by the logic that "war is hell".

However the Free Syrian Army is not the only factor among the enemies of the regime, because three additional types of forces are also present.

One type is the local Islamic militia, acting according to the Salafi jihadi formula, which is maximum religious adherence integrated with unconstrained holy war against "the devil" Asad, his regime and his infidel 'Alawi brothers. It seems that it was this sort of group that carried out the attack in Damascus in which the heads of the security establishment were eliminated on Wednesday, July 18, an attack that revealed very great technical, operational, organizational and intelligence-gathering capabilities. The members of these groups are local Syrians who know well how to integrate into the population and act from within it. In every Sunni city at least one such group is active, and overall there are scores of such groups active throughout Syria. The long-range goal of these groups is the establishment of an Islamic Emirate in which Islamic Shari'a will be fully implemented. One of them even claims that its capital will be Jerusalem… Names of such militias are "kitaab al sahabah" (Battalion of Companions of the Prophet Mohammed), "Katibat Ahrar Prat" (Battalion of the Free of the Euphrates), which is part of "Lua' Sakur al-Shahaba" (Division of the Eagles of Aleppo), "Lua' al-Haq" (Division of Rights/Truth/G-d), "Katibat Sawt al-Haq" (Battalion of the Voice of Rights/Truth/G-d), "Katibat al-Ahrar al-Sham" (Battalion of the Free of Greater Syria), These names carry a significant traditional-religious meaning with Sunni overtones.

The second type of group is composed of Sunni Muslim foreigners who have infiltrated into Syria by way of Iraq, Jordan, Turkey and Lebanon; people who generally call themselves part of Global Jihad or al-Qaeda. These are terrorists who have no particular home, roam the Muslim world in places where there is no law and order, and take part in the jihad against the local infidel. Many of them come originally from Saudi Arabia, Yemen, the Emirates, Algeria, Libya and Egypt, but there are also Chechens, Tatars, Bosnians and a few Africans. They are conspicuous in the field, and therefore they congregate in small, separate groups and operate out of groves or abandoned, built-up areas that the local population has fled because of the war. The operational experience that they have accumulated in previous arenas, their jihadist motivation and the fact that they have nothing to lose makes them especially dangerous.

The third type of group comprises local militias based on tribal association, whose task is to defend the village or the town in which the tribe still lives. These militias have no specific ideology, and their raison d'etre is to defend the population of the village from any attempt to harm it, whether from the side of the regime or from the Free Syrian Army. In Syria, hundreds of such militias are active, usually defensively. They have a large presence in Hasaka, the Kurdish area in Northeast Syria and in the area of Dir a-Zur in the East, which is populated by Bedouins.

In total, including all four types of armed forces, hundreds of fighting groups are active in Syria, all of them fight against the regime, but also among themselves. The divisiveness and the controversies weaken them, but worse than this is the fact that even after the collapse of the Asad regime, these militias will continue to fight each other, due to their different agendas and conflicting goals: the militia of a Christian village will fight to the death against a Salafi jihadist militia, in order to defend the members of the village from the sword of Islam. The Christians in Syria know well what happened to their brothers in Iraq, and what is now happening to them in Egypt, in Gaza and all over the Islamic world, but for now, the Christians in Syria - who represent 3 to 5 percent of the population - remain there.

In parallel, there is a phenomenon that we have focused on since the riots in Syria began in March of 2011: the rise of the sectarian component, which has been hidden all the years under a heavy dampening carpet. At this point it is clear that when the regime collapses, the Alawites who live in the Sunni cities - Damascus, Homs, Hama, Alleppo and others - will have to flee for their lives in order to keep the connection between their heads and their shoulders. Whoever remains may be slaughtered with the cry of "Allahu Akbar" in the throats of the killer and his friends. For some months now the Alawites have been streaming weapons and ammunition to the mountains of Ansaria in the Western area of the state, in order to defend the area which was allocated to them for their own protection because of their heresy. Then the French Mandate made the Alawites into rulers over the others, so that the Alawites could rule "without having to answer to a High Court or human rights organizations". The Alawites have already begun to deport the Muslims from the coastal cities - Latakia, Tartoum, and Banias - who came to the area in order to work there over the past decades, as a sort of "religious cleansing" in order to create for themselves a homogeneous Alawite state, which will be "Muslim-rein".

The Kurds already control broad areas in their district in Northeast Syria, while being helped by their brothers who live in Iraqi Kurdistan, and it seems that also their brothers in Turkey support them. Most of them do not have Syrian citizenship because of the regime's claim that they are infiltrators from Turkey; Syria does not even recognize them as a distinct group with a non-Arabic language, deserving the right to establish their own schools in the areas in which they live.

The Druze in Southern Syria live in Jabal al-Druz, the Mountain of the Druze, a volcanic zone covered with boulders of immense dimensions, a district which is named for its capital al-Suida. The French Mandate forced the Druze to join with Syria in the blood-soaked war that began in August 1925. In order to blur their distinct religious identity, the Syrian regime changed the name of the mountain to Jabal al-Arab "Mount of the Arabs", but they remained faithful to their Druze identity and their tribal tradition, and it could very well be that they will also try to establish for themselves a separate state.

The Bedouins, who live in the Eastern district of Dir a-Zur have never liked the city dwellers, because they are different culturally. It is reasonable to assume that they also will aspire to establish for themselves a separate political entity. Great love has never existed between the two main cities, Damascus and Aleppo, and therefore it may be that these two centers will prefer to disengage from each other in the wake of Syria's collapse.

The future of Syria will call to mind the past of Yugoslavia, as well as the present situation in Iraq and Lebanon, because the fundamental problems of these states exist also in Syria. The stabilization of the separate parts as legitimate political and governmental entities will take years, in the process of which much blood will be shed in never-ending conflicts between various groups based on ethnicity, tribe, religion and sect. The illusion of Syrian patriotism and the dream of Arab nationalism, which has become the bloody nightmare of the "Arab Spring", shatter on the hard ground of the separatist, group-based reality, which is alive and kicking in the Middle East.

The president is dead, long live the new emir!!! 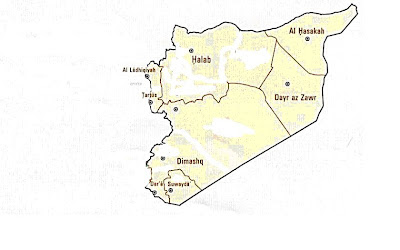 Comment: The accompanying map is used for illustrative purposes only, and does not represent accurate borders.

Regarding the attack in Damascus on July 18, see:http://www.timesofisrael.com/islamist-group-not-free-syrian-army-blew-up-assads-inner-circle-israeli-expert-says/

Translated from Hebrew by Sally Zahav.

Links to Dr. Kedar's recent articles on this blog:

And how about American and European "advisers" ?