An analysis of the British Labour party under the chairmanship of Jeremy Corbyn provides a panoramic view of many aspects of socialist anti-Jewish hate-mongering. 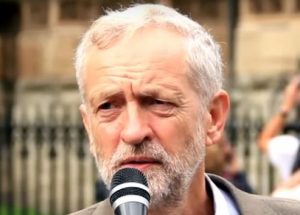 EXECUTIVE SUMMARY: An analysis of the British Labour party under the chairmanship of Jeremy Corbyn provides a panoramic view of many aspects of socialist anti-Jewish hate-mongering. The most extreme comments come disproportionately from Muslims, a subject that is taboo for the British media. The incitement is accompanied by a whitewashing of the party’s anti-Semitism problem, a whitewashing that is supported by a great majority of its members. The ongoing hate-mongering in the party has led to some unprecedented reactions by the British Jewish leadership.

In the past decades, Western European social democrat politicians and parties have been among the most extreme inciters against Israel. In several cases, there have also been expressions of anti-Semitism. Leading socialist politicians, including the late Swedish Socialist Prime Minister Olof Palme and the late Greek Socialist Prime Minister Andreas Papandreou, have accused Israel of Nazi practices.

Only in the past two years, however, has a European socialist party – the British Labour Party – been exposed for widespread and extreme anti-Jewish incitement. Classic anti-Semitic as well as anti-Israel remarks by elected representatives have been published on a more or less ongoing basis. An analysis of the British Labour party provides a panoramic view of many aspects of socialist anti-Jewish hate-mongering.

As the “anti-Semitism in Labour” issue started to interest the British media, it slowly became clear that extreme anti-Semitic expressions had been present in the party prior to Corbyn’s appointment. In 2014, for example, under previous Labour leader Ed Miliband, Naz Shah proposed – before she was elected MP in Bradford – that Israel should be relocated to the US. At that time, apparently no one was interested in publicizing this statement.

Among the expressions of anti-Semitic hate uttered by elected representatives, a disproportionate number has come from Muslims. This was the case during Miliband’s leadership and continues under Corbyn. Despite hundreds of articles on anti-Semitism in Labour, the specifically Muslim aspects remain taboo in the British media.

Miliband steered the party towards a proposal of recognition of a Palestinian state. This was possibly done to gain the support of Muslims during the May 2015 elections, as an estimated 4.5% of the British population are Muslim.

Corbyn mixes with anti-Semites. He has donated money to, and attended gatherings of, a charity headed by Holocaust denier Paul Eisen. He has referred to the genocide-promoting Hamas and Hezbollah terrorist organizations as his friends. When he came to power he promoted anti-Semites, including Ken Livingstone, to senior positions. Livingstone, the former mayor of London, was later suspended after his repeated claims that Hitler had supported Zionism in the 1930s. Livingstone resigned from the party in 2018.

It is not easy to identify which of Corbyn’s acts fall squarely within the International Holocaust Remembrance Association’s definition of anti-Semitism, which was adopted by the UK government. In May 2018, Jonathan Arkush, outgoing President of the Board of Deputies, the umbrella organization of British Jewry, claimed that Corbyn held anti-Semitic views. He noted that the Labour leader had been chairman of the Stop the War organization, which is known for some of the worst anti-Israel discourse.

When media pressure concerning anti-Semitism in Labour became an issue, Corbyn appointed human rights activist Shami Chakrabarti in April 2016 to investigate the accusations. Her report was poorly written and unprofessional. Shortly afterwards, Corbyn proposed Chakrabarti for a peerage, which resulted in her becoming a baroness. Corbyn also appointed her the party’s Shadow Attorney General for England and Wales. Little has been heard from this supposed expert about ongoing Labour anti-Semitism.

The confrontation with anti-Semitism in one of the country’s two major parties has had an important impact on members of the Jewish community. Many of them no longer vote for Labour, and some have stopped donating. An unprecedented demonstration of the Jewish community against anti-Semitism in Labour took place in London outside a Parliamentary Labour Party (PLP) meeting. In a letter to the chair of the PLP, the Board of Deputies wrote: “Again and again, Jeremy Corbyn has sided with anti-Semites rather than Jews.”

In Parliament, several Jewish and pro-Jewish Labour MPs have reported that they have been subjected to tremendous harassment. Labour’s attempt to conquer the London constituency of Barnet – the most Jewish borough in the UK – failed in the May 2018 local elections.

The modest increase in Labour seats nationwide during those elections disappointed the party’s expectations and was seen as partly due to the anti-Semitism debate. Arkush went farthest, stating that Corbyn’s views could drive Jews to leave Britain if he were to become prime minister. He was one of the Jewish leaders who met Corbyn in April 2018, a meeting those leaders found disappointing.

Small groups on the Jewish left are enthusiastic supporters of Corbyn. He continues to provoke, and attended a Passover seder at Jewdas – a radical anti-Zionist Jewish organization that has called Israel a “steaming pile of sewage which needs to be properly disposed of.”

In March 2018, Corbyn said that since he became party chairman, there have been 300 complaints about anti-Semitism. He said that of those accused, 150 people have either been expelled or resigned, and added that the backlog of complaints is 60 cases. However, the Daily Mail reported a backlog of 74 cases and said MP John Mann claims to be aware of another 130 complaints. One source in Labour told the paper: “Many of these cases include the most shocking and blatant anti-Semitism that would make even a committed Nazi blush.”

The disappointing local election results may have been the impetus for Labour’s announcement that it will speed up dealing with the complaints with the intention of clearing the backlog by the end of July. In view of the party’s checkered past under Corbyn, we will have to wait and see whether this promise will be fulfilled.

Dr. Manfred Gerstenfeld is a Senior Research Associate at the BESA Center and a former chairman of the Steering Committee of the Jerusalem Center for Public Affairs. He specializes in Israeli–Western European relations, anti-Semitism, and anti-Zionism, and is the author of The War of a Million Cuts.

Copyright - Original materials copyright (c) by the authors. 0">
Posted by Sally Zahav at 2:13 AM