Hamas’s leadership is dangling the option of a long-term truce before Israel with one hand and firing barrages of rockets at southern Israel with the other, terrorizing hundreds of thousands of Israelis and risking the security of the Gazan civilians it rules over.

Hamas’s leadership is dangling the option of a long-term truce before Israel with one hand and firing barrages of rockets at southern Israel with the other, terrorizing hundreds of thousands of Israelis and risking the security of the Gazan civilians it rules over.
Why is Hamas doing this? Essentially, it’s because its leadership wants to signal to Israel, Egypt and the Palestinian Authority that it is willing to go all the way in its quest to end Gaza’s isolation, and that if it cannot get enough money into Gaza to save its regime and military wing, it is willing to drag the area into a new war, whatever the consequences.
The latest round of fighting began when a Hamas live-fire demonstration of snipers in Gaza was seen, apparently by mistake, as an attack by the Israel Defense Forces, drawing Israeli tank fire that killed two Hamas gunmen. Hamas swore to revenge their deaths and began rocketing the Israeli south. But the tank-fire incident is more of a secondary catalyst, which acted as a spark in a powder keg. 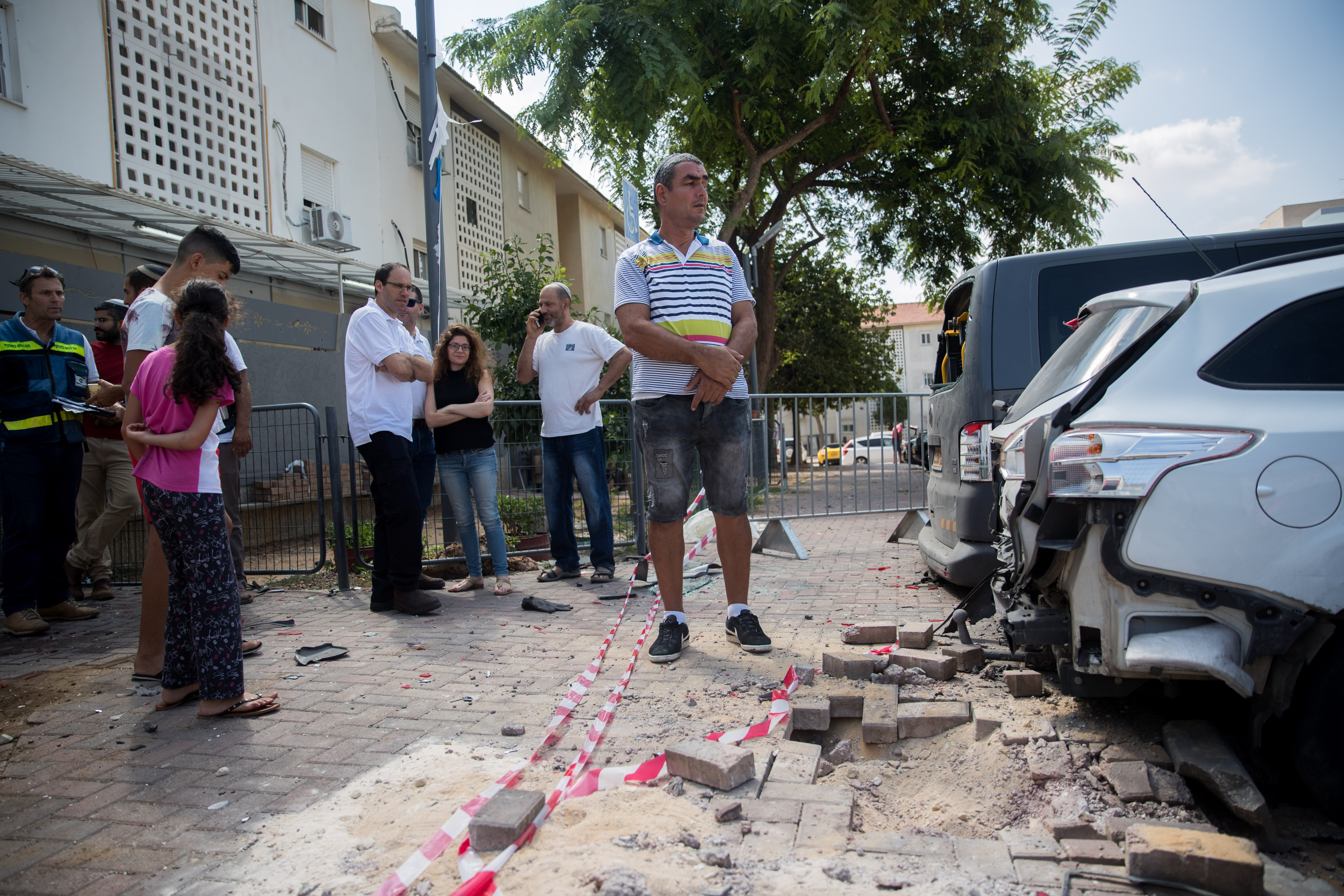 The site where a mortar shell from Gaza hit an apartment building and cars in the southern Israeli city of Sderot, near the border with Gaza, on Aug. 9, 2018. Photo by Yonatan Sindel/Flash90.
Hamas is gambling on the assumption that Israel, preoccupied with greater threats to the north in the form of Hezbollah and Iranian forces in Lebanon and Syria, will make due with responding with limited airstrikes and seize on the opportunity to de-escalate in Gaza.
Hamas is also using this latest escalation to broadcast a dangerous message to the rest of the region: that it is able to control the rules of the “game,” and that it can exchange blows with Israel—the strongest regional power around—flood the Israeli south with rockets and walk away to tell the tale.
This, Hamas likely believes, will strengthen its narrative and credibility on the Palestinian street. Hamas is also using these events to push other actors into answering its demands to end Gaza’s isolation and get money pouring into Gaza again, thereby preventing an economic collapse.
But Hamas’s brinkmanship can fail for many reasons and blow up in its face. It might push too far, and compel Israel to seize the initiative and launch a major military operation that will end when Jerusalem, not Hamas, decides. Whether or not this happens will be up to the Israeli cabinet and its various, complex calculations over such a maneuver.
In addition, Hamas may fail to secure funds for Gaza because it is unable to reach an agreement with its internal enemy, the Palestinian Authority, which in many ways holds the keys to Gaza’s economy.
As long as the P.A. views Gaza as a renegade rebel Islamist province, which is under an illegitimate government that rose to power in a coup in 2007, it will block efforts by the international community or regional actors to invest in Gaza’s economy. The P.A. can get in the way of Egyptian efforts to reach a long-term arrangement to stabilize the situation.
The P.A. is demanding that Hamas disband its military wing first—something Hamas will never accept, meaning that the situation is stuck in a stalemate.
Hamas’s military wing in Gaza, which has evolved into a terrorist army specializing in urban warfare and rocket attacks, is its top priority. Hamas would rather go to war than contemplate the option of disarming. This is one of the signals it appears to be sending through recent incidents. It wants to continue investing huge sums in the military wing, and have others foot the bill for Gaza’s civilian needs.
Hamas is trying to blackmail Israel and others into accepting this setup.
Israel, for its part, will soon have to make critical decisions.
Its leaders will either need to decide that the status quo has become intolerable, and that a strategy is needed—based on a combination of military force and diplomacy—to restore calm and restore Israeli deterrence, which has been badly eroded. Alternatively, it may decide to go for a long-term truce.
Hamas’s aggression is a signal that the middle-ground option of a limited truce that is violated with increasing frequency and severity is becoming untenable.
The security escalation in southern Israel and the Gaza Strip over the last 24 hours shows that Hamas is prepared to take the region to the brink of war, and that it believes it can force new rules of conduct on Israel while paying a minimal price for its aggression.
Its actions have placed the region in danger of a major new conflict.
Yaakov Lappin