The Deeper Meaning of China's Base in Tajikistan - Emil Avdaliani

Is there a "manifest destiny" for China? 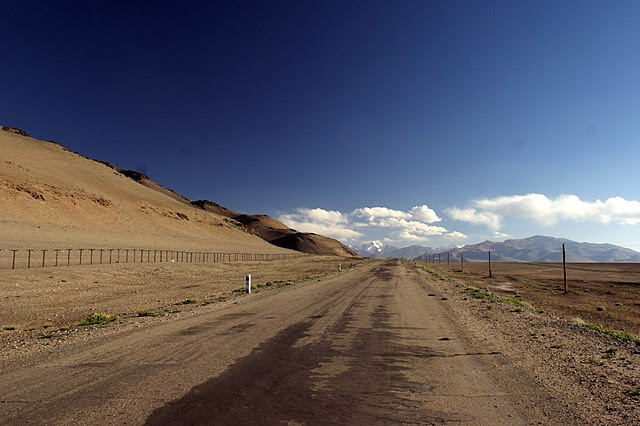 EXECUTIVE SUMMARY: It is au courant among analysts and scholars to compare modern-day China to early 20th-century Germany, in that it too is a rising power that desires a larger role for itself in world affairs. But a better comparison might be with the United States of the late 19th-early 20th century. The US of that era presented itself as non-interventionist, but it also proclaimed a “manifest destiny” to expand its influence.

Western media outlets recently announced that China has built military facilities on the Tajik side of the Tajik-Chinese border. This move is significant, as it is the first confirmation (following earlier unconfirmed reports) of a Chinese military/semi-military presence in the Central Asia region.

The area where the Chinese facilities are located is strategically important for two reasons: it overlooks one of the crucial entry points from China into Central Asia, and it is close to the vital corridor through which the country connects to the Afghan heartland. That corridor is essential to China’s Belt and Road Initiative (BRI).

Put into a wider context, the opening of this new base might worry Moscow, as Central Asia is perceived by the Russians as within their sphere of influence. For Moscow, modern-day Central Asia is especially important as it is the only region where the Kremlin can still project its influence through military and economic means. Chinese military/security measures are a challenge to Russian pillars of power in this region.

It is fashionable among world analysts to argue that Russia and China would rather cooperate in Central Asia than fight each other. However, the critical point is that while cooperation might be in force for years and possibly for decades, the Russians will always be worried (if they are not already) that as China grows economically, it will embark on simultaneous military expansion beyond its borders.

Many believe the Chinese do not think about military expansion across Eurasia. They are correct in noting that (predictably) no Chinese officials have articulated any military agenda for the continent.

The point they miss is that China, as a rising power, relies on global trade routes for internal stability and enhancement of its world role. It will eventually have to be more active beyond its borders whether it wants to or not. The new base in Tajikistan is a good indicator of this evolving Chinese approach to world security.

Many compare the China of today to Germany in the early 20th century, as it too was a rising power that wanted a larger role for itself in world affairs. But there are many problems with that comparison. It is true that China, like Germany a century ago, aspires to build a larger military navy and increase its economic potential abroad. But rather than compare China to Germany, which was defeated in both world wars, it would perhaps be more expedient to compare modern China to the United States of the late 19th-early 20th century.

There are many similarities. In some ways, China is facing a new world and new opportunities that had been closed to it for centuries. Surrounded by an arc of almost impregnable geographical barriers, China’s heartland produced enough to sustain a self-sufficient economy. The 19th century amounted to a national catastrophe as European powers assailed China for economic gains, while in the early 20th century, Japan’s hegemony undermined all Chinese attempts to revive the state.

Thus, China has never been a global power. It does not clearly see what kind of world order it wants to build. Everything about modern Chinese foreign policy shows that the country is still developing its “world order ideas.”

Like the US in the early 20th century, today’s China feels that it must take a more powerful internationalist stance as its economic appetite makes it unwise to rely on the benevolence of other powers. At the same time, again like the earlier US, China is reluctant to go down that road, as it fears that a more “global China” could ignite suspicions around the world that China is threatening to dominate.

Modern-day Beijing portrays its policy as one that benefits not only China but the entire world. At the same time, it sees that there is a certain necessity to increase China’s military potential both at sea and on land.

One hundred years ago, the US cast its foreign policy as peaceful and non-interventionist. However, it was the young US that proclaimed that it had a “manifest destiny” to expand its influence into North America and the waters around the continent.

Like modern China, the US of one hundred years ago did not openly aspire, nor really plan, to achieve global dominance. American statesmen of the time only gradually started to see that the country needed to take a more active geopolitical role by influencing political developments in Europe and the Asia-Pacific.

Modern China also resembles the younger US in that they both have a view that the world can benefit from them economically and through the way they plan to (re-)create the world order.

How the US was catapulted from domination of North America in the early 20th century to global preeminence after 1945 serves as a good explanatory case on the rise and fall of great powers. China can learn a lot from the American rise, a story of the gradual build-up of military and economic power coupled with attractive cultural features.

The rise of new powers does not happen quickly; it takes decades of meticulous work. That could explain why China’s comparison with the Germany of the early 20th century is flawed. The Kaiser’s Germany was powerful, but its human and economic potential could not match that of the allied powers.

China, on the other hand, possesses a large population as well as enough economic potential to try to challenge the existing balance of power.

Though similarities with the US exist, it is not a foregone conclusion that China will replicate the American rise to global preeminence.

The US began to dominate the oceans and parts of Eurasia only after the major geopolitical contenders in Europe had fought two deadly wars and destroyed the European world order. The US also acted from a safe geographic position: oceans essentially precluded the then powers from reaching North America.

China’s geographical position, by contrast, is continental, surrounded from the east by US-allied Asian countries nestled on a chain of islands.

That said, historical comparisons show that the rise of new powers is always followed by conflict, and often one conflict alone does not suffice to alter the balance of power. Carthage lost its power after two long wars with Rome, and Europe lost its grandeur after two world conflicts. Perhaps the same will apply to China’s rise as well.