In his first-ever appearance before the House Judiciary Committee on Tuesday, Attorney General Bill Barr will condemn the "grave abuses" in the "bogus Russiagate scandal," while also highlighting Black-on-Black violence and defending law enforcement officers in no uncertain terms, according to a transcript of his prepared remarks obtained by Fox News on Monday night.
The attorney general's unusually aggressive posture will be matched by similarly full-throated arguments from GOP lawmakers on the panel, including ranking member Rep. Jim Jordan, R-Ohio, Fox News is told. GOP lawmakers plan to highlight former Attorney General Eric Holder's remark that he was then-President Barack Obama's "wingman," noting their close relationship to preempt accusations that Barr is President Trump's yes-man. A strategy document from the GOP side also suggests they will defend the Roger Stone commutation and the recent controversial removal of a U.S. attorney.
"Ever since I made it clear that I was going to do everything I could to get to the bottom of the grave abuses involved in the bogus Russiagate scandal, many of the Democrats on this committee have attempted to discredit me by conjuring up a narrative that I am simply the president’s factotum who disposes of criminal cases according to his instructions," Barr is expected to say at the outset of his remarks. "Judging from the letter inviting me to this hearing, that appears to be your agenda today."
Barr will go on to deny that Trump has improperly interfered with any of his decisions, before pointing to statistics showing progress on racial-justice issues, according to his prepared remarks.

"Police forces today are far more diverse than ever before; there are both more Black police chiefs and more Black officers in the ranks," Barr is expected to say. "Although the death of George Floyd – an unarmed Black man – at the hands of the police was a shocking event, the fact is that such events are fortunately quite rare. According to statistics compiled by the Washington Post, the number of unarmed Black men killed by police so far this year is eight. The number of unarmed White men killed by police over the same time period is 11. Some unarmed suspects, moreover, were physically attacking officers or threatening others at the time they were shot. And, the overall number of police shootings has been decreasing." 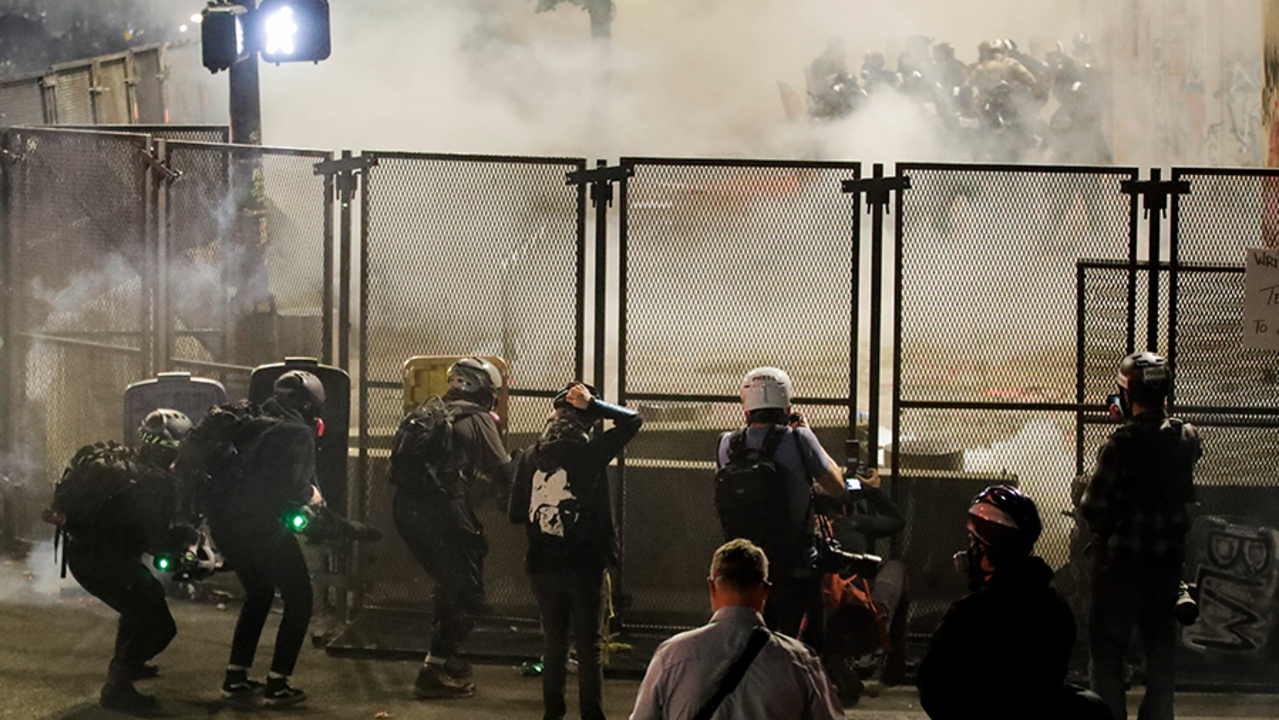 At the same time, the attorney general is expected to say, Black Americans too often kill each other. "The threat to Black lives posed by crime on the streets is massively greater than any threat posed by police misconduct," Barr's remarks read. "The leading cause of death for young Black males is homicide. Every year approximately 7,500 Black Americans are victims of homicide, and the vast majority of them – around 90 percent – are killed by other Blacks, mainly by gunfire. Each of those lives matter."

A Democratic counsel to the committee told Fox News that there will be roughly four-and-a-half to five hours of questioning, covering topics from civil rights to his alleged deference to the White House. Barr's appearance is voluntary and not responsive to any subpoena, and Fox News is told executive privilege has not been exerted at this time to shield any topics or discussions – although that could change during the hearing.

For Barr, the remarks will be an opportunity to reinforce his image as a lawman's lawman. Just before Christmas, he visited New York's One Police Plaza to meet with New York Police Department brass after a series of suicides among New York police officers. Later that night, he hosted a thank-you dinner for hundreds of officers. The NYPD sent two officers from each precinct, along with some chiefs, the NYPD's commissioner and his chief deputy.

Now more than perhaps any other time in modern history, law enforcement has been under sustained assault, as documented by videos and body camera footage from federal and local officers. An article by The Associated Press on Sunday documented the harrowing scene inside a Portland federal courthouse, where rioters have been gathering nightly to fire explosives at the building. Rioters also have fired lasers into officers' eyes, leading to apparently permanent eye damage – and none of it, Barr is expected to say, had anything to do with George Floyd.

"Every night for the past two months, a mob of hundreds of rioters has laid siege to the federal courthouse and other nearby federal property," Barr will say, according to the prepared remarks. "The rioters arrive equipped for a fight, armed with powerful slingshots, tasers, sledgehammers, saws, knives, rifles, and explosive devices. Inside the courthouse are a relatively small number of federal law enforcement personnel charged with a defensive mission: to protect the courthouse, home to Article III federal judges, from being overrun and destroyed."

Barr is expected to add: "What unfolds nightly around the courthouse cannot reasonably be called a protest; it is, by any objective measure, an assault on the government of the United States. In recent nights, rioters have barricaded the front door of the courthouse, pried plywood off the windows with crowbars, and thrown commercial-grade fireworks into the building in an apparent attempt to burn it down with federal personnel inside."

Rioters, Barr will say, have "started fires outside the building, and then systematically attacked federal law enforcement officers who attempt to put them out—for example, by pelting the officers with rocks, frozen water bottles, cans of food, and balloons filled with fecal matter. A recent video showed a mob enthusiastically beating a deputy U.S. marshal who was trying to protect the courthouse – a property of the United States government funded by this Congress – from further destruction. A number of federal officers have been injured, including one severely burned by a mortar-style firework and three who have suffered serious eye injuries and may be permanently blind. Largely absent from these scenes of destruction are even superficial attempts by the rioters to connect their actions to George Floyd's death or any legitimate call for reform." 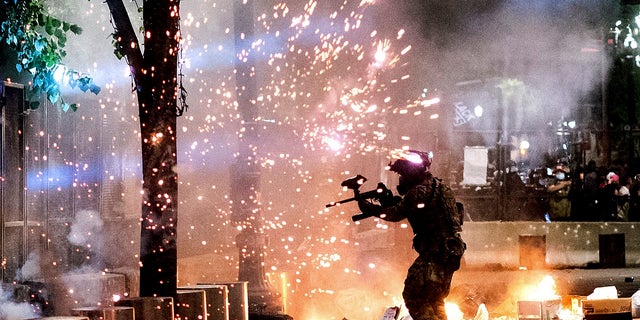 A federal officer firing crowd-control munitions outside the Mark O. Hatfield United States Courthouse last week in Portland, Ore. (AP Photo/Noah Berger)
Democrats, meanwhile, are expected to criticize Barr for seeking leniency in the sentencing of Trump ally Roger Stone — his idea alone, he insisted, and a “righteous decision based on the merits.” The move promoted angry dissent in the Justice Department and the swift resignation of a well-regarded prosecutor, and though the judge did impose a sentence shorter than what the trial team had sought, Trump commuted the sentence anyway.

Barr also moved to dismiss the prosecution of former Trump administration national security adviser Michael Flynn, a request the Justice Department expected would be simple but that instead has produced a pitched fight before a federal appeals court. Barr dropped the Flynn case only after a mountain of striking exculpatory evidence had emerged – including a handwritten note from a top FBI official debating whether the bureau's objective was to "get [Flynn] fired."

And, Barr tried to fire the U.S. attorney in Manhattan, but that didn't go precisely as planned when U.S. Attorney Geoffrey Berman refused to step aside, leaving Berman's deputy in his place instead of the prosecutor Barr had selected to replace him.


There were 20 injuries to federal officers in one weekend in Portland. Antifa rioters throw projectiles like canned food and rocks at officers. They blind them with lasers and then throw explosive fireworks at their feet. #PortlandRiots pic.twitter.com/mLH5h5uDVs
— Andy Ngô (@MrAndyNgo) July 28, 2020

Despite the criticism, acquaintances have insisted that Barr was just being Barr – that he was motivated not by ambition or anything other than the opportunity to put his heartfelt beliefs into practice.

"He doesn't have anything to prove from a professional or career standpoint," said his longtime colleague and friend, attorney Chuck Cooper. "He's been at the apex of the legal profession for a long time. And so, in that respect, he's unlike any other attorney general. He's already ascended to that pinnacle once before."


Gregg Re is a lawyer based in Los Angeles. Follow him on Twitter @gregg_re or email him at gregory.re@foxnews.com.