Iran's nuclear facilities have been under attack for weeks, but it's still unclear by whom

Watch the latest video at foxnews.com

Hours earlier, more than 500 miles away, detonations rocked the basement of an old, nondescript home in a northern pocket of Tehran. The two-story dwelling was said to have housed at least 30 gas cylinders that were used for unclear purposes.


Both incidents came fewer than two days after a string of explosions – and power outages – were reported west of Tehran in the early hours of Friday. Local reports indicated that multiple “mortar-like sounds similar to anti-aircraft missiles” were heard.

According to the state-owned Fars News, there was a #fire Shahid #Tondgooyan petrochemical plant in Khuzestan province of #Iran at 5:15 pm on Sunday. https://t.co/V13lOiEtsX
— Iran International English (@IranIntl_En) July 12, 2020


While some Iranian officials denied the outbursts altogether, and others quoted a former mayor – who reportedly died more than a year ago – as saying it was caused by gas tanks, experts said there is something bizarre at play across the beleaguered country.

These most recent attacks happened on the heels of multiple other mysterious explosions at sensitive sites over the course of the last three weeks – and no one is precisely sure what is going on, other than its rattling of the regime and stymying its controversial nuclear program.

"The tempo and tenor of the recent explosions in Iran have been unusual. There is evidence of a concerted campaign underway to thwart Iran's nuclear program," Jason Brodsky, Policy Director of United Against Nuclear Iran (UANI), told Fox News. "The more Iran advances its nuclear program in violation of the Joint Comprehensive Plan of Action (JCPOA), the greater the likelihood for additional strikes."

He continued: "Additionally, Tehran is distracted by the coronavirus and economic problems. The public is increasingly disenchanted with the regime's ability to govern the country. The conditions are ripe for additional kinetic activity."

The first enigmatic hit happened on June 26 at a known liquid fuel production center that makes ballistic missiles in Khojir, near Parchin, southeast of the capital. Despite a downplaying by officials, satellite images later emerged to show extensive damage on an arsenal of gas tanks, along with an entire hillside blackened in the blast. 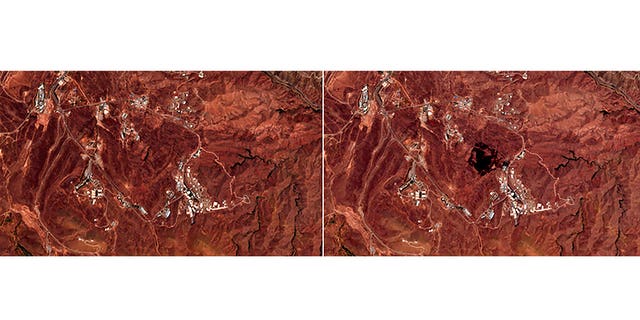 This Friday, June 26, 2020, photo combo from the European Commission's Sentinel-2 satellite shows the site of an explosion, before, left, and after, right, that rattled Iran’s capital. Analysts say the blast came from an area in Tehran’s eastern mountains that hides a underground tunnel system and missile production sites. The explosion appears to have charred hundreds of meters of scrubland. (European Commission via AP)
Then on June 30, 19 people died following an explosion at a medical center in Tehran.

The head of Tehran's medical center:

Two days later, on July 2, the notorious Natanz uranium enrichment plant – which became active in 2018 as Iran's principal place to develop centrifuges required to produce uranium and other nuclear weapons were in-development – was struck by a mammoth blast, as confirmed by the Atomic Energy Organization of Iran (AEOI).

Tehran conceded that a severe attack had impaired an "industrial shed," and AEOI officials acknowledged to the Iranian media that the blow had "set back Iran's nuclear program by months."

IRAN NUCLEAR SITE FIRE HIT CENTRIFUGE FACILITY, ANALYSTS SAY
According to an analysis by the Kuwait-based publication Al-Jarida, the target of the assault was the UF6 gas – uranium hexafluoride – which Iran uses to infuse into its most advanced IR-6 centrifuges – of which 80 percent has been decimated as a result of the attack.

Then, on July 3, an unexplained fire erupted at a power plant in the southwest city of Shiraz, triggering a power outage in the region.

The next day, yet another explosion and inferno tore through a power plant in Ahwaz, while at the same time, a chlorine gas leak was detected at a Karoun petrochemical plant in Mahshahr, about 75 miles away.

"While one can never ignore the potential for an accident or gross incompetence, the locations of these explosions coupled with the increasing number of things exploding in the last few weeks does make a strong case for this being foreign sabotage," underscored Behnam Ben Taleblu, a senior fellow at the Foundation for the Defense of Democracies (FDD). "Let's not forget, they are all occurring on or near, nuclear, missile, or military installations."

Nonetheless, a swirl of suspicion continues to linger around the series of seemingly harmonized attacks, with many suspecting Israel – and the United States – as pulling strings.

But adding to the peculiarity, BBC Persian reported that just after midnight on June 30, some of its journalists received an email from a group purporting to be the "Homeland Cheetahs" – comprised of anti-government, underground dissidents – claiming credit for earlier attacks. The outlet also said they were informed of the Natanz attack hours before it was documented by officials. 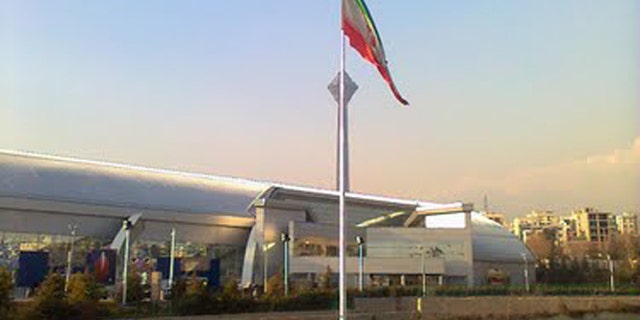 New flagpoles in Iran are sparking fears that the Islamic regime is using them to hide satellite jamming technology that can block Internet, TV and phone communication. (Hassan A. Khosravi)
Several intelligence sources told Fox News that they had never heard of the outfit prior to the BBC's report, and suspected it to be a ruse or a front for a much more sophisticated operation.

THE RISE AND FALL OF SYRIA'S FIRST LADY: WHY THE US IS GOING AFTER ASMA ASSAD?

While almost all experts conclude that the attacks that have occurred are physical, some say cyber warfare may additionally play a part – especially given that Natanz was targeted by the infamous Stuxnet malware kindled by Israel and the U.S. in 2010. That attack successfully crippled controls at the site by altering the spin cycles of the centrifuges and left scientists scratching their heads.

"Although many are asking the question, was this a cyber-attack or physical sabotage, the answer could be 'both.' The most likely suspects are the U.S. and Israel working in tandem. Both countries have very sophisticated cyber warfare units and significant capabilities when it comes to cyber-kinetic attacks," explained David Kennedy, CEO of TrustedSec and a former NSA and Marine Corps cyber-intelligence expert. "An attack of this magnitude would require a great deal of planning and preparation, and is very complex because you are exploiting industrial control systems and air-gapped devices." 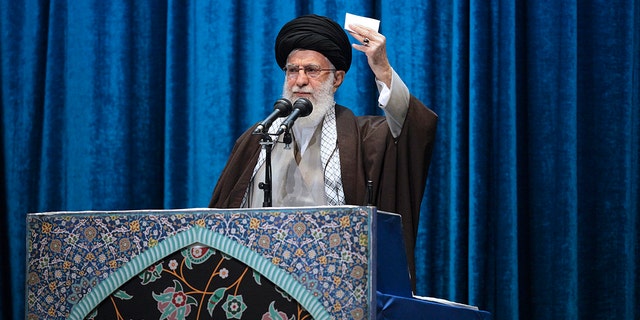 In this photo released by the official website of the office of the Iranian supreme leader, Supreme Leader Ayatollah Ali Khamenei delivers his sermon in the Friday prayers at Imam Khomeini Grand Mosque in Tehran, Iran, Friday, Jan. 17, 2020. Iran's supreme leader said President Donald Trump is a "clown" who only pretends to support the Iranian people but will "push a poisonous dagger" into their backs, as he struck a defiant tone in his first Friday sermon in Tehran in eight years. (Office of the Iranian Supreme Leader via AP)
Jeff Bardin, CIO of security firm Treadstone 71, concurred that their assessment "indicates this was a physical attack likely with cyber used for reconnaissance and support."

"The explosion was far beyond what is believed cyber sabotage could have created," he said. "If Iran complains too loudly that adversaries destroyed their nuclear weapons development, the IAEA and the world will want a local inspection – Iran has claimed they are not creating nuclear weapons. If they complain too loudly, we can confirm those locations for nuclear weapons development. If Iranian authorities claim adversary actions occurred, internally, they look weak, where they already suffer a lack of confidence. If they openly respond, they risk more attacks."

Experts have also pointed to the glaring holes in Tehran's intelligence apparatus – essentially allowing its country's most guarded sites to be slaughtered with convention weapons, with little means of foiling it or fighting back.

"Tehran has not yet retaliated for the Natanz explosion. (But) I would expect to see an uptick in Iranian cyber operations against the U.S., Israel, and our Mideast allies like Saudi Arabia, but I don't expect a serious conflagration," Kennedy surmised. "The Iranians have suffered a major setback to their nuclear program and their domestic security. They've been badly embarrassed. And the truth is, they may not know the full extent of what happened in that attack. They also don't know what else is coming."


Hollie McKay has a been a Fox News Digital staff reporter since 2007. She has extensively reported from war zones including Iraq, Syria, Yemen, Afghanistan, Pakistan, Burma, and Latin America investigates global conflicts, war crimes and terrorism around the world. Follow her on Twitter.