​
by Ofira Seliktar and Farhad Rezaei

The close military collaboration between the countries has major implications for the decades-long US domination of the Gulf and large stretches of the Indian Ocean. 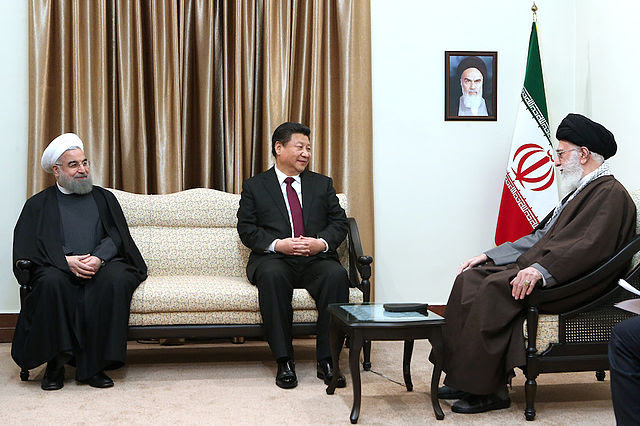 EXECUTIVE SUMMARY: The newly announced Iran-China 25 Year Comprehensive Partnership is unprecedented in its scope. It contains a “mystery clause” that gives China control over how Iran spends its resources, which could ultimately amount to Iran’s selling its sovereignty to Beijing. The close military collaboration between the countries also has major implications for the decades-long US domination of the Gulf and large stretches of the Indian Ocean.

On June 23, 2020, the Iranian government announced the Iran-China 25 Year Comprehensive Partnership. According to a leaked draft of the 18-page agreement, it amounts to an unprecedented economic, military, and technological collaboration between the two states.

Relations between Beijing and Tehran, which date back to Iranian President Mahmoud Ahmadinejad’s “Pivot to the East“ policy, have blossomed under Chinese President Xi Jinping, who is pushing China’s ambitious Belt and Road Initiative (BRI). According to China, the BRI aims to create a huge unified market in Asia, the Middle East, and Africa through massive investment in infrastructure, education, and technology. Critics view the BRI as a thinly disguised effort to achieve Chinese strategic and economic domination over a large swath of the globe.

Iran would serve as a regional hub for the BRI, giving China extraordinary leeway across a wide range of economic activity. This includes petrochemical production, renewable energy, civilian nuclear energy, high-speed railways, highways, subways, airports, and maritime connections. Among the projects mentioned is a railroad system that would link the eastern and western network of railroads as well as development of the Makran coastline on the Oman Sea, which is Iran’s outlet to the Indian Ocean. In the first stage, China has committed itself to develop the port of Jask, build industrial cities, and develop tourism in the Makran region. Beijing has promised to create three free trade zones—in Maku, Abadan, and the Gulf island of Kish—as a boost to the local economy.

A section of the draft agreement reveals an exceptionally high level of military cooperation between the two countries. This includes, among other things, shared development of defense industries, intelligence sharing, and joint military maneuvers. Earlier reports indicate that China and Iran have been working on a large arms deal timed to coincide with the ending of the UN Security Council arms embargo.

According to sources, China has promised to invest up to $400 billion over the duration of the agreement. In return, Iran would provide China with regular oil deliveries, allegedly at a considerable discount. The agreement also obliges Iran to use China’s fifth-generation telecommunication technology and internet platforms.

The benefits of this arrangement to China are clear. Beijing would accomplish its strategic shift to the Indo-Pacific region. China has already built a string of logistical station ports along the Indian Ocean to Djibouti and the Suez Canal. Dominating Iran would give China a side presence in the Gulf, notably through the port of Jask, which is just outside the Straits of Hormuz. Most of the world’s oil transits through that passage. Jask is also critical to the US, whose Fifth Fleet is headquartered in nearby Bahrain. A powerful Chinese presence there would brush away decades of American strategic domination of the Gulf and swaths of the Indian Ocean.

For the Iranians, who are operating under the severe pressure of American sanctions, the deal is a lifeline. The agreement states that both countries are determined to implement it “in the face of pressure from a third country,” an unmistakable reference to the US. Implied in this phraseology is a Chinese threat to work against the harsh sanctions imposed by the Trump administration.

The Kayhan newspaper, a mouthpiece for Ayatollah Khamenei, was quick to point out that China is big and strong enough to withstand American bullying. However, several analysts have asserted that the tough language—indeed, perhaps even the entire agreement—is more of a PR exercise, a “declaration of intent” by both countries to defy the US. These analysts note that many of the hundred-plus projects China has undertaken to construct may never come to fruition.

But some Iranian critics, including Ahmadinejad, believe the Tehran government has sold out Iran’s sovereignty to the Chinese. A little-noticed clause in the Document seems to bolster this claim. The paragraph states that China will “pay attention” (tovajoh nemayad) to the way Iran spends the proceeds from oil sales. Moreover, China expects Iran to use its oil receipts in an “optimal way” (estefadeye behineh)—a vague phrase, but one with a clear message.

China does not want Iran to spend its newly acquired money on the revolutionary export projects so beloved by the late Quds Force chief Qassem Soleimani. President Hassan Rouhani and FM Muhammad Javad Zarif, who negotiated the agreement and are both known for their dislike of the Revolutionary Guards, might have signaled to the Chinese that they should safeguard their investment by limiting the use of the oil proceeds.

Whatever its source, the “optimal way” clause points to a larger implication of the 25 Year Partnership. Stability is essential if China is to profit from its $400 billion investment, and Beijing is willing to put pressure on Iran to abstain from its foreign policy adventures.

It is not clear whether the Revolutionary Guards would oblige, however. The 2015 Joint Comprehensive Plan of Action (JCPOA) is a case in point. The signatories “expressed hope that the agreement would result in peace and stability in the region and the world”—but the Guards used the resources that became available after the lifting of sanctions to create the Shiite Liberation Army in Syria, prop up the Houthis who are fighting a Saudi-led coalition in Yemen, and develop a new generation of missiles and drones to create further mischief in the Middle East. China will not necessarily be able to stop the Guards from repeating such efforts.

Ofira Seliktar is Professor Emerita at Gratz College, Pennsylvania and Farhad Rezaei is a professor of International Relations at York University in Toronto. They recently co-authored Iran, Revolution, and Proxy Wars (Palgrave Macmillan 2019).