Another Terror Attack Thwarted in Israel

A terror attack was thwarted Saturday following the arrest of two Palestinian teens by Border Guard and police officers, near the Tapuach Junction in the West Bank.

The two, both 17, took a taxi to the junction and upon arrival began walking towards the checkpoint.

Their behavior aroused the suspicion of Border Guard and police officers stationed at the checkpoint, who called on them to stop for a routine search. The teens attempted to flee and the officers initiated suspect-arrest protocol, eventually apprehending them.

A search of their belongings discovered five pipe bombs, a gun and munitions.

The two, who are residents of the Balata refugee camp in Nablus, were handed over to security forces for further interrogation. 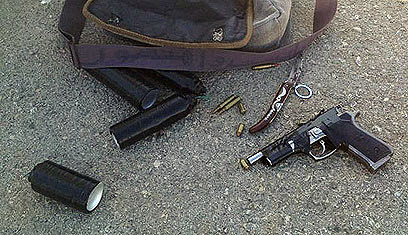 (Photo courtesy of the Border Guard)

Border Guard sappers were called to the scene and safely defused the bombs.

The defense establishment said that terror groups are pursuing various ways to execute attacks against Israeli targets, despite the relative calm following the last round of escalation vis-à-vis the Gaza terror groups.

Local Border Guard force Chief Superintendent Avi Biton told Ynet that, "shortly prior to the suspect's arrival at the checkpoint, the officers heard a small blast.

"Two of our officers then saw the two, who were acting visibly nervous as they approached the checkpoint. The soldiers ran up to them, and at first they tried to resist arrest, but we were able to get them under control."

Biton said that sappers were called to the scene immediately upon the explosives' discovery, adding that "The initial explosion was probably meant to take out the checkpoint itself.

"The officers' vigilance undoubtedly prevented a terror attack. Those bombs could have caused sever damage, especially as the local bus stops are packed on Saturday night," he said.

'Relieved we stopped a terror attack'

"We were on a routine mission at Tapuach Junction when a report came in about an explosion," Yunesi told Ynet.

"We spotted the two Palestinians at the bus stop a few minutes later. They were watching our station and hanging around for no apparent reason. They seemed suspicious so we called out to them.

"They ignored us at first, but then they started to approach us," he continued. The two initiated suspect-arrest protocol, and according to the officer called on the two to empty the bag they were carrying.

"They emptied their bag and we were about 10 meters away when we spotted the pipe bombs. We ran towards them and tries[d] to apprehend them but they resisted.

"One of them dropped a gun on the ground in the struggle. Other officers came to back us up and after we had them under control, we also discovered the other one was carrying a knife."

Both Yunesi and Gratopski said that they were extremely relieved and proud that they were able to prevent a terror attack, which was probably planned for Independence Day.

Gratopski added: "The only thing that crosses your mind during an incident like this is getting through it.

"When it was all over and we realized what they had in their bags, I thought about the fact that we helped save people's lives. It's a great sense of satisfaction."