ZOA Chief: US Jews Shied Away from Hagel Row

Morton Klein tells Post that other Jewish leaders urged him to drop 'campaign against Hagel', brands them 'frightened group of Jews'. 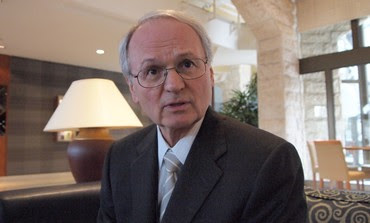 Morton Klein Photo: SAM SOKOL
American Jews are “frightened of making an issue seem more important to Jews than others,” said Zionist Organization of America President Morton Klein on Tuesday. In Israel as a member of a delegation organized by the Conference of Presidents of Major American Jewish Organizations, Klein sat down to speak with the Jerusalem Post in the lobby of Jerusalem’s Inbal hotel to provide his take on the issues facing organized American Jewry.

The ZOA, which is a member of the Conference of Presidents, was founded in 1897 and is what Klein calls “the oldest pro-Israel [organization] in the United States.”

Discussing the his lobbying effort in Washington aimed at blocking the confirmation of Secretary of Defense nominee Chuck Hagel, Klein said that the ZOA was, aside from the Republican Jewish Coalition, a partisan group, “the only major Jewish group to publicly oppose Hagel and Brenan.”

The “AJC, AIPAC, ADL [and] the Conference of Presidents never came out and said we oppose this man because he is horrible on Iran, he is horrible on terrorism, horrible on Israel, horrible on fighting radical Islam,” Klein said. “I was called by major Jewish leaders, personally called, and [they] told me to stop our campaign against Hagel.”

Klein said that his counterparts at other organizations said that he was “making this a Jewish issue,” which they considered “bad for the Jews.”

The NAACP promotes issues of importance to the African-American community, he said, but “I don’t think they are too worried about that.”

The fact that he got these calls, he says, shows that “we are still a frightened group of Jews even as successful as we are in America.”

The ZOA’s current focus, its President said, is “educating the media, Congress and American citizens of the truth of the Arab war against Israel.”

He said that many young Jews are losing their connection with Israel and their Jewish identity due to successful propaganda campaigns on college campuses.

“I have found, as I speak on campuses throughout the country, that Jewish kids don’t understand the reality of the Arab war against Israel and they become ashamed of Israel.”

Asked how his organization and other groups representing what he calls “organized American Jewry” coordinate their work, if at all, he replied that he finds it “deeply troubling that when specific issues come to the fore we don’t have meetings to discuss them.”

“My friends all think that the major jewish organization get together to discuss issues of importance to the jewish community in order to determine what actions and positions the organized Jewish community should take. The leaders of the major Jewish organizations do have important officials from the United States and Israel address them. So that happens but rarely do we have a formal discussion of issues.”

Klein said that believes it is important that Jewish leaders get together regularly to “have such discussions giving both sides on an issue a chance to make their views known and try to persuade others of what actions the organized Jewish community should take.”