Chief PLO negotiator Saeb Erekat says the Palestinian Authority has not been briefed by the US administration on details of possible Abbas-Netanyahu summit; denies US president's visit behind failure of Hamas, Fatah talks in Cairo. 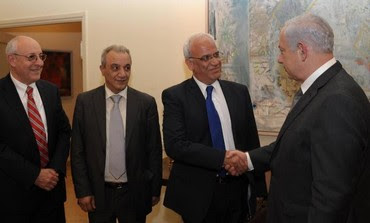 Commenting on reports that Abbas and Netanyahu may meet during US President Barak Obama's visit to the region next month, Erekat said that the US administration still has not briefed the PA leadership on details of Obama's schedule.

Erekat said that the talk about a possible Abbas-Netanyahu summit was nothing but "Israeli analysis and statements." He said that the PA leadership's demands regarding the peace process remained unchanged - Israeli recognition of the pre-1967 lines as the borders of a Palestinian state and a full cessation of construction in settlements.

Erekat denied that Obama's planned visit was behind the failure of the latest attempt to end the dispute between Fatah and Hamas.

Hamas and Fatah representatives who met in Cairo last weekend failed to reach agreement on the formation of a Palestinian unity government and holding new presidential and parliamentary elections in the West Bank and Gaza Strip.


Copyright - Original materials copyright (c) by the authors.
Posted by Sally Zahav at 2:10 AM