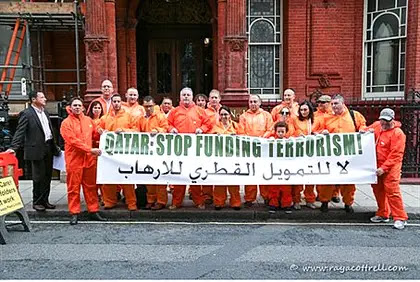 Protesters outside Qatari embassy in London
Raya Cottrell
[Editor: The sign literally reads "No to Qatari funding of Terrorism"]

A coalition of British pro-Israel activists held a hard-hitting flash-mob protest against the Qatari government in London Friday, in what they say is just the opening salvo in their battle to force the oil-rich gulf state to end its funding of Islamist terrorism throughout the Middle East.

Qatar is the leading state sponsor of Hamas, the Islamist group which rules the Gaza Strip and whose charter calls for the destruction of the State of Israel and advocates murdering Jews as a holy duty.

Hamas's actions in Gaza - particularly its summary, public execution of political rivals - have been compared to those of IS by both Israeli leaders and Palestinian officials, and the choice of clothing was a not-so-subtle attempt to remind the public about the similarities between the two groups, organizers said.

But the flash mob is just a taste of things to come; on Sunday, the two groups will be leading hundreds in a march demanding an end to Qatar's funding of terrorist organizations.

The rally - which will take place at 2 p.m. tomorrow outside the Qatari embassy on South Audley Street in west London - will seek in particular to highlight the controversial decision by world footballing authority FIFA to allow Qatar to host the prestigious World Cup in 2022.

There have been growing calls for the honor to be withdrawn unless Dubai cuts its ties with a range of radical Islamist groups, most notably Hamas.

"Together with Turkey, Qatar is the main financier of Hamas, the terrorist organisation responsible for launching nearly 4600 rocket attacks against Israeli civilians during the recent Gaza conflict," activists said in a joint statement. "The Hamas covenant calls for the destruction of the State of Israel, the introduction of Sharia law and the creation of an Islamic State 'from the Jordan River to the sea.' Hamas also used Qatar funds for the construction of tens of tunnels, each one costing $3 million (£1.85 million) to build."

"Qatar is also a safe haven for known terrorist leaders and for its support of the Egyptian Muslim Brotherhood, an extremist organisation instrumental in ousting President Hosni Mubarak during the Arab Spring. The organisation’s spiritual leader, Sheikh Youssef al-Qaradawi, uses Qatar as his base, as does Hamas leader Khaled Mashal," the statement added.

Indeed, although Qatar recently responded to international pressure by expelling several exiled Egyptian Muslim Brotherhood leaders, Qaradawi and Mashaal both continue to use Dubai as a base.

The statement also noted allegations that "wealthy Qatari individuals" have backed the Islamic State, also known as ISIS or ISIL, which has led a bloody campaign of ethnic-cleansing through Iraq and northern Syria.

Speakers at the event will include prominent media lawyer Mark Lewis, who uncovered the recent media phone-hacking scandal which rocked the British press.

"When there are so many football-related reasons and so many political reasons why Qatar is not fit to host the World Cup in 2022, ordinary people must stand up and protest the unification of corruption and terrorism," Lewis said. "It is wrong for football, it is wrong for freedom and it is wrong for FIFA."

Using slogans such as "Kick Terrorism out of Football" and "Qatar: Stop Funding Terrorism," organizers are determined to bring Qatar’s financial and political backing of global terror to the attention of both football fans and the wider public.

In what is being hailed as an early coup by campaigners, FIFA's president Sepp Blatter on Friday responded to growing calls online - led by SFI and IFTF - to condition Qatar's hosting of the games, saying soccer fans are "right" to demand that the "global footballing community" act ethically.

Activists believe such public pressure - which undermine Qatar's attempts to portray itself in the west as a "moderate" force - can bring results.

Such pressure is believed to have contributed towards Qatar's decision to expel seven Muslim Brotherhood leaders last week, and experts suggest that Dubai may be reconsidering its links to Hamas - the Brotherhood's Palestinian branch - as well.

"It’s about time that people woke up and looked at those who finance terror, and as such enable terror attacks, not just at the organisations themselves," says IFTF director Anat Koren, who is also the publisher of the British-Israel Alondon magazine and founder of Seret, the Israeli Film Festival held each year in London. "Qatar not only finances known terrorist groups but also harbors their leaders. Such a state cannot be allowed to host a world class event such as the World Cup."

Qatar owns a sizeable chunk of properties and assets in the UK, including the prestigious Harrods department store,  the former Olympic Village, the Shard building, no 1 Hyde Park (the world’s most expensive block of flats),  20% of the London Stock Exchange,  20% of Camden market, shares in Barclays Bank, Sainsbury’s  supermarkets and more.

Simon Cobbs, founder of SFI, said "football fans deserve better than Qatar as the host for such a prestigious  event, noting how "Hamas is committed to the destruction of the State of Israel and instating Sharia law in the region."

He also questioned how FIFA could guarantee that Israelis fans - or even players - would be able to attend the games in a hostile state.

"Given Qatar’s position as a wealthy banker of terrorism, we also have to ask the question if anyone with an Israeli stamp in their passport would be allowed to attend the World Cup. And furthermore, would an Israeli football team be able to enter Qatar?"