Experts Say Jordan in Danger - and Israel's Next in Line

Floods of refugees from regional turmoil could pose an existential threat to both Jordan and Israel - or result in a Palestinian state. 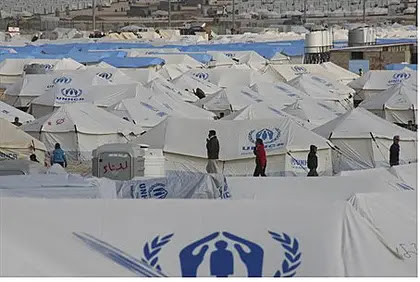 Za'atri tent city for Syrian refugees in Jordan
Reuters
In a new article, Professor Arnon Sofer, head of the Chaikin Chair of Geo-Strategy at the University of Haifa, and Anton Berkovsky discuss the danger of immigration from the turmoil-filled Arab states to Israel.

"Countries in the Middle East are currently in states of internal and external war, pressing the State of Israel to prepare for waves of immigrants from Arab countries to Israeli territory, which may endanger her existence," they wrote.

According to Sofer and Berkovsky, the waves of immigrants already constitute a real danger to the future of Jordan. The worst case scenario being the movement of ISIS into Jordan, and subsequently creating a pure "Islamic State" within the country.

According to the data presented in the article, 2013 showed a record number of immigrants in the world - more than 232 million people, or about 3.2% of the world's population. Professor Sofer suggests that the Middle East presents a unique picture. "Within 30 years (1950-1980), the population doubled, and in the next 30 years (1980-2010), the population doubled again. This is one of the main reasons why the demographics, economics, and politics of the Middle East have resulted in disorder and instability."  Sofer added that climate changes which led to severe water shortages in areas like North East Syria near the border with Turkey and Iraq, should also be taken into account.

Sofer argues that the events of the Arab Spring, the Civil War in Syria, and repeated crises in Iraq, have already created waves of refugees, resulting in demographic changes in the population map that are beyond recognition. According to estimates, following the Civil War in Syria, 3-4 million people became refugees outside of Syria, and another 8 million have become refugees in their own homeland. Wars between the various factions in Iraq have led to 750 thousand refugees, who have already left Iraq - mainly to Jordan, and another 3 million refugees inside Iraq. These refugees, who flood into neighboring countries cause societal changes that threaten the stability of such countries.

The most troubling possibility is Jordan. A million to a million and a half refugees from Iraq and Syria have become part of the population of 6.5 million citizens of Jordan. The Palestinian population rate decreased from 70% to about 60% of the total population, according to the study, while the percentage of Syrian refugees is estimated between 8%-15%.

"The Jordan of 2014 presents a new ethnic mosaic, and the national dynamic has completely changed. It should be remembered that some of the refugees are intruders from extremist groups, such as ISIS. Other refugees are in such a terrible situation that it is easy for such radical groups to recruit them " noted Professor Sofer.

Sofer suggests three possibilities: The first, and optimistic approach - allowing massive Western aid to maintain Jordan's stability; The second - The collapse of the kingdom and the outbreak of civil war, similar to the situation in Syria. In this scenario, Sofer envisions the Palestinians trying to take over the kingdom and establish a Palestinian state; The third and most dangerous option is for ISIS to take over large parts of the country thereby joining Jordan to their Sunni caliphate. The last two possibilities will cause hundreds of thousands of additional refugees to the Middle East.

According to Prof. Sofer, if such events materialize and instability grows, there is a real danger to Israel. Not only would it mean the existence of unstable regimes, extreme and hostile, close to its borders, but also the fact that a considerable portion of the hundreds of thousands of refugees could attempt to enter Israel.

The authors say that according to the 2013 data, an estimated 250,000 immigrants remained in Israel illegally. Additionally, thousands of Palestinians have entered Israel since 1967. The dangers of demographic turmoil taking place in neighboring countries could cause these numbers to grow significantly.

"Therefore, we must quickly prepare for new waves of immigration, in addition to those who have already entered Israel, mostly Palestinian and Arab immigrants from Syria, Jordan, Iraq, and Lebanon," concluded Professor Sofer.