Ari Yashar: One of Oldest Known Synagogues Seized by ISIS in Syria 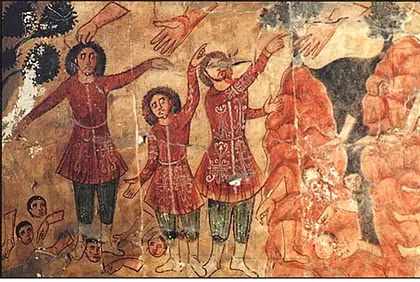 Wall fresco Dura Europos synagogue in Syria
Reuters
Islamic State (ISIS) jihadists not only threaten the current Middle East - according to antiquities officials in Iraq and Syria, the terror group threatens to erase 5,000 years of history and relics in upper Mesopotamia, including one of the earliest Jewish synagogues.

Much of northern Iraq and eastern Syria, which is rich in the archaeological remains of numerous ancient civilizations, is now under the iron fist of ISIS which has been destroying pagan idols as well as selling relics on the international black market to raise funds, reports Associated Press (AP).

Syrian Director-General of Antiquities and Museums Maamoun Abdulkarim says looting from archaeological sites in the country has gone up tenfold since early 2013, with ISIS seizing numerous important ancient sites.

Aside from destroying pagan statues from the Assyrian period in Tell Ajaja, Abdulkarim noted the 2,300-year-old city of Dura Europos has come in for particularly intense looting.

The ancient city lies near the Iraqi border on a cliff overlooking the Euphrates River, and has fallen into ISIS hands; satellite imagery from April shows numerous holes from looter digs littering the site.

Images show hundreds of people, including gunmen, taking part in the excavations from dawn until night in many cases. Abdulkarim notes dealers are present, and "when they discover an artifact, the sale takes place immediately. They are destroying entire pages of Syrian history."

One of the earliest known Jewish synagogues is located at Dura Europos along with numerous pagan temples and churches, making the digging particularly troubling.

The fate of the synagogue, which was discovered in 1932 and dated by an Aramaic inscription to 244 CE, remains unknown.

Meanwhile in Iraq Qais Hussein Rashid, head of the country's Museums Department, reveals that ISIS captured 1,800 of Iraq's 12,000 registered archaeological sites when they seized the northern city of Mosul and Ninevah province in June. They have since captured even more as they pushed south to Baghdad.

ISIS has control of four ancient cities, Ninevah, Kalhu, Dur Sharrukin and Ashura, which were capitals of the Assyrian Empire that arose around 2,500 BCE. In Kalhu, reliefs in the grand palace of Assyrian King Ashurnasirpal II from the 9th century BCE have been heavily looted to be sold on the black market.

Other casualties of the brutal Islamic group in the Mosul area were the tombs of the Jewish Biblical prophets Jonah and Daniel in July; Jonah's tomb reportedly dated from the 8th century BCE.

After destroying Jonah's tomb, thieves are thought to have dug into an unexcavated palace in Ninevah that was located underneath the tomb, according to Rashid who cited local antiquities officials still in Mosul.

The UN's cultural agency UNESCO has been taking steps to try and guard Iraq's relics, with Nada al-Hassan of UNESCO's World Heritage Center telling AP "we are very, very, very concerned that the situation could be aggravated in a way that causes more and more damage."