The Egyptian Armed Forces carried out a major exercise, "Raad 24", in the Western Zone. Although it is a part of a series of exercises that are carried out periodically, Dr. Shaul Shay believes there is no doubt "Raad 24" was influenced by developments related to the western border with Libya 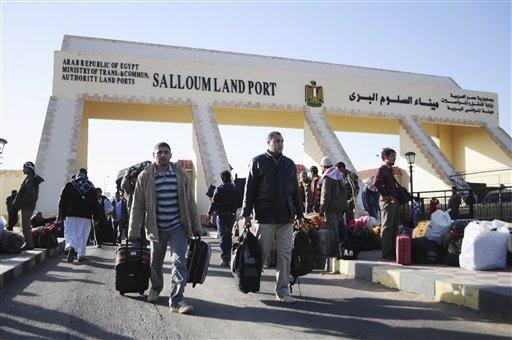 The Egyptian Army is administratively divided into 4 commands/zones (Western, Northern, Central, Southern command), in addition to two armies (2nd, 3rd army). The annual military exercise included simulated attacks on enemy's defenses with the help of formations of the Air Force that carried out cover-up and reconnaissance missions. The artillery forces were also deployed in the exercises to destroy enemy back-up troops, confuse, and destroy the enemy's command centers. Armored vehicles and mechanized infantry units also took part in the drills to break through and destroy the enemy's defenses under the cover of armed choppers and anti-tank projectiles.

In a speech, Wahid Ezzat Khafagi, commander of the Western Zone, said that the troops in this zone are “filled with the resolve and determination to sustain the highest levels of combat efficacy and preparedness and to dedicate themselves fully to all the tasks to which they are assigned in order to safeguard Egypt’s western borders and to protect the capacities of the Egyptian people.”

In the exercise there have been two main phases:
The exercise was an occasion for all participating troops and branches of the military to display their field and combat skills. They demonstrated efficacy and precision in managing combat activities and rapidly executing coordinated combat and artillery tasks at specified times and places.

The Challenge of the Libyan Border

The Egyptian-Libyan border is over 1,200 kilometers long. It is almost entirely open desert and virtually impossible to secure, especially given Egypt’s stretched military resources.         The border with Libya is one of Egypt’s major security concerns, particularly after the fall of Gaddafi's regime, the civil war and the growing power and influence of ISIS in Libya.

Should ISIS in Libya decide to attack targets within Egypt, their access would be difficult to block. Smuggling of weapons and munitions from Libya would be similarly hard to interdict. Unlike in the Sinai, there is no barrier like the heavily defended Suez Canal separating Egypt proper from a contested region.

On July 19, 2014, an Egyptian security post in Farafra in the heart of the Western Desert was ambushed, leaving 22 soldiers dead. The Farafra attack represented a bleak turning point for Egypt’s fragile security environment. Following the Farafra attack, the army announced that it would transfer a brigade from the Southern Military Zone to the attacked area, and there were also reports of a wide-ranging military operation to locate and capture the perpetrators.

Weapons and jihadist operatives have been smuggled into Egypt and then to the Sinai after infiltrating through gaps in the western border. According to Egyptian military sources, the military has moved to intensify efforts to close such gaps, deciding to install advanced border observation systems imported from the US.

Egypt is responding to the challenges and threats from the Libyan territory by a combination of operational and technological measures and defensive and offensive tactics.

Improving Surveillance along the Border

"This mobile surveillance sensor security system will provide Egypt with advanced capabilities intended to bolster its border surveillance capabilities along its border with Libya and elsewhere. This procurement is intended for Egyptian Border Guard Forces, which currently lack any remote detection capability along unpatrolled areas of Egypt’s borders," the DSCA said in its announcement.

The sale also requires periodic trips to Egypt by US government officials and contractors, for program and technical review meetings, testing and training for up to five years.

On February 2015, Egyptian air force has conducted airstrikes against ISIS positions in Libya. The air strikes were triggered by a video released by ISIS in Libya a day earlier, depicting the beheading of 21 Coptic Christians from Egypt. Within hours, the Egyptian Air Force responded with airstrikes against ISIS training camps and weapons stockpiles, in retaliation for the killings. Warplanes acting under orders from the Libyan government also struck targets in Derna, reportedly in coordination with Egypt.

The air strikes had allegedly killed up to 64 ISIS militants, including three of the leadership, in the coastal cities of Derna and Sirte.

Egypt's army sometimes operates in Libya when pursuing illegal smugglers, Libyan Foreign Minister Mohamed al-Dairi has revealed. In an interview published by London-based publication Al-Hayat, Dairi said, "Egyptian forces have no presence on Libyan soil, except for when they cross the border to pursue smugglers, something which happens in collaboration with Libya."

While the timing and size of "Goliath 7" is noteworthy, perhaps more consequential is the participation of the RDF.  El Sisi created it as one of his last moves as defense minister. Various Egyptian officials, including El Sisi himself, have hinted that Egypt has a right to secure its border with Libya and reduce the flow of terrorism across its borders through military means, the RDF is perfectly suited to lead a more concerted military effort in nearby Libya, should Egypt step up its involvement.

The border covers some 1,000 kilometres and has represented a serious threat to Egyptian security in recent years, with smugglers exploiting it to get weapons and militants in and out of Egypt. During his visit to New York, President Abdel Fattah el-Sisi discussed the challenge that the influx of weapons and fighters from Libya presents to Egyptian national security.

Although this was the 24th round in the series of the "Raad" exercises that are carried out periodically, there was no doubt that this one was influenced by developments related to the western border with Libya. Exercise Raad 24 was a significant step to upgrade the readiness of the Egyptian armed forces in the Western front – including for the option of military intervention in Libya.