In a lesson delivered at the Al-Aqsa Mosque, Palestinian cleric Sheikh Abu Taqi Al-Din Al-Dari said that "the basic principle is that the Islamic state should work to conquer the world through Jihad for the sake of Allah" and that "it must conquer Rome, Washington, and Paris." The lesson was posted on the Internet on January 16, 2016. 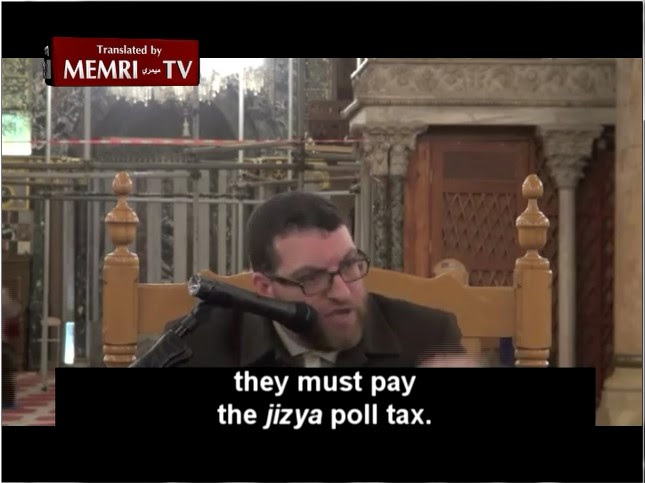 "Nowadays, power means shooting – the shooting of shells, missiles, and so on. With regard to the natural and original battles of the Muslims, (we say that) the relationship of the Abode of Islam with the abodes of the infidels is one of war. Therefore, the Islamic state must prepare and then act to annex those countries (to the Abode of Islam), and to impose its control and authority over those countries. If the (infidel) authorities and regimes refuse to allow the Islamic state to impose the rule and order of Islam over their countries, they must pay the jizya poll tax. If they refuse that too, they should be fought for the sake of Allah.

"Thus, the basic principle is that the Islamic state should work to conquer the world through jihad for the sake of Allah.

"The purpose of Jihad for the sake of Allah is to make His word reign supreme, and to conquer the world. Thus, the Prophet's companions roamed the planet Earth in order to conquer it. The Islamic State, which will be established soon, Allah willing, should do the same. It must conquer Rome, Washington and Paris, Allah willing, by means of Jihad for the sake of Allah, in order to remove oppression, and to purify the land from the filth of polytheism. "