The Wall Street Journal outlined alternative White House initiatives to impose punitive measures on Israel before Obama vacates office. These include a United Nations Security Council resolution to force Israel to make concessions or, even worse, defining the future parameters of an agreement with the Palestinians without consulting Israel or ensuring its basic security needs 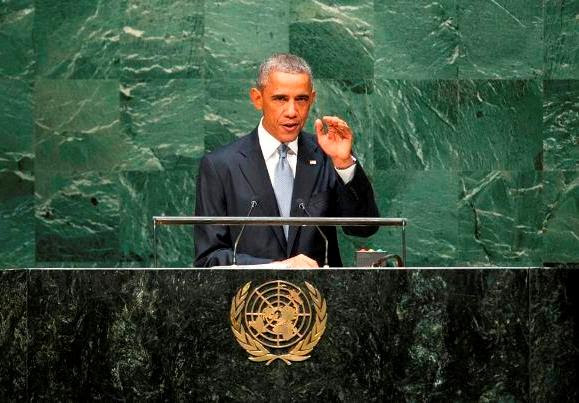 U.S. President Barack Obama continues to ignore the catastrophic global repercussions of his flawed policies toward the Middle East, where hundreds of thousands of Arabs have been butchered in civil wars and millions displaced from their homes. The situation would have been different had he acted with a modicum of fortitude and leadership in lieu of groveling to rogue states.

But ominously, and counter to most predictions, over the past few weeks the supposedly lame-duck president has signaled a probable intention to launch yet another initiative to pressure Israel to make concessions. This at a time when the Palestinians are engaged in a frenzied campaign of stabbings and other forms of murder of Israeli civilians. And while the Palestinian mullahs and media sanctify the killers as national heroes and Palestinian Authority President Mahmoud Abbas continues to praise the “martyrs” and provide pensions to their families.

Obama unburdened himself in a lengthy interview with his favored Jewish journalist, Jeffery Goldberg, when he referred to Prime Minister Benjamin Netanyahu as “one of his deepest disappointments” in the Middle East, being “too fearful and politically paralyzed” to advance the peace process.

This prompted former Israeli Ambassador to the U.S. Michael Oren to comment in The Algemeiner: “Really? Netanyahu is one of Obama’s ‘deepest disappointments’ as a Middle East leader? More disappointing than Syrian President [Bashar] Assad? Than former Iranian President [Mahmoud] Ahmadinejad? Than ISIS chief Abu Bakr al-Baghdadi?” I would also add to Oren's list our “peace partner” Abbas, who blesses the blood of those who murder us. Not to mention the Iranian Ayatollah Ali Khamenei, whom Obama has befriended despite his repeated calls for the destruction of Israel.

In the same week, The Wall Street Journal outlined alternative White House initiatives to impose punitive measures on Israel before Obama vacates office. These include a United Nations Security Council resolution to force Israel to make concessions or, even worse, defining the future parameters of an agreement with the Palestinians without consulting Israel or ensuring its basic security needs -- a step that the U.S. had until now repeatedly vetoed.

Obama is also said to be actively encouraging European intervention, such as the French initiative that would endorse recognition of a Palestinian state if negotiations failed. The Wall Street Journal reported that Obama is also contemplating a joint statement exerting pressure on Israel from the Middle East Quartet -- comprising the U.S., U.N., European Union and Russia.

Vice President Joe Biden apparently paved the ground for this during his recent visit to the region when he proposed an initiative based on recognizing east Jerusalem as a Palestinian capital, an end to all settlement activity, Palestinian recognition of Israel as a Jewish state and Palestinians forfeiting the Arab refugee right of return.

Even setting aside the current PA incitement to murder Israelis, no government could possibly contemplate accepting such proposals, which would dramatically endanger Israel’s security. To implement this would be utterly irresponsible, bearing in mind that in the absence of the Israel Defense Forces, Hamas and/or ISIS are poised to take over the corrupt and despised Palestinian Authority.

However, the Palestinian media has already announced that Abbas rejected Biden’s proposals -- which clearly demonstrates that it is the elimination of Jewish regional sovereignty rather than attaining statehood that motivates the Palestinian leadership.

Strains in the relationship are also evident in the consistently hostile remarks against Jewish settlement even within the neighborhoods and areas of east Jerusalem that are 100% Jewish and will always be retained by Israel. Yet, aside from a vague indirect statement by Biden after a U.S. tourist was murdered by a Palestinian terrorist, the administration has refused to condemn the PA or Abbas for their incitement to kill Jews and sanctifying the murderers as heroes.

On top of this, there appear to be complications in the negotiations of the complex 10-year military aid package and Biden conveyed the message that Israel would not obtain the level of support it sought.

Under these circumstances and bearing in mind how Obama sandbagged him on his last visit, it is not surprising that Netanyahu is now reluctant to meet with the U.S. president. Contrary to U.S. administration press leaks, the White House was informed that Netanyahu is unlikely to come at this time to Washington, even if the pretext that he would be accused of intervening in the elections, was flimsy.

These tensions with the U.S. are concomitant with the enormous pressure that is building up against Israel in Europe and at other international levels.

This is also at a time when anti-Semitism -- often expressed as anti-Israelism -- in Europe and elsewhere has assumed tsunami levels. It is burgeoning at universities, including campuses in the U.S. that have witnessed acts of anti-Semitic incitement and violence that have impacted heavily and for the first time even traumatized some American Jewish students. This has been aggravated by the fact that a number of alienated Jews have been promoted to the forefront of the boycott, divestment and sanctions movement and other anti-Israel campaigns.

Over the next year, Israel and the Jewish people may well be facing the greatest challenges since the Yom Kippur War. The chaos associated with the U.S. elections only further complicates the issue.

One of the most frequent propaganda tactics employed against Israel is the false allegation that the barrier to a peace settlement is the fact that Israel is currently governed by the most right-wing government in its history. That Netanyahu has compromised far beyond the red lines drawn by the late Yitzhak Rabin, who is currently portrayed by the left as the man of peace, is conveniently ignored.

Likewise, the international community does not appreciate that despite major differences concerning domestic social, economic and religious issues, each of the Zionist opposition parties, if empowered, would assume basically similar foreign and security policies to the current government. The overwhelming majority of the nation opposes annexation of the territories and remains committed to separating themselves from the Palestinians. However, there is broad consensus across all the Zionist political parties that, so long as the current Palestinian hatred and regional turmoil prevails, an independent Palestinian state cannot be contemplated.

A display of unity would go a long way toward defanging much of the poison of our adversaries, who allege that Israel’s foreign policy is a product of right-wing extremists.

It would also provide a major impetus for Diaspora Jewry to act more courageously and decisively. In addition, it would neutralize the haredi extremists threatening to bring down the government over issues such as access of non-Orthodox groups to the Western Wall or mikvehs, which would lead to further erosion of ties between Israel and American Jews in the midst of this crisis.

I have repeatedly maintained that there is a dire need for a broad unity government during these critical times. MKs Isaac Herzog, Yair Lapid and other opposition politicians provide fuel for our enemies by castigating the government. They would have a tremendous positive global impact were they to act responsibly and alter their approach, making it clear that the nation is united in its refusal to make further concessions that could undermine Israel’s security. Surely leaders of the principal opposition Zionist parties could temporarily maintain the status quo on domestic issues, suspend their parochial personal ambitions and agree to unite and confront our adversaries as a united people.

Besides, political leaders demonstrating a willingness to set aside short-term political advantage in order to promote the national interest would be acting in accordance with the desire of most Israelis and would gain considerable standing and support from the public if they behaved in this manner. In our dysfunctional political system, accountability to the electorate is minimal. But under the present circumstances, public pressure could have an impact.

History will judge harshly and condemn those political leaders who, despite a virtual consensus, refuse to act in what is clearly the national interest.

Now is the time for our political leaders to stand up and be counted.

This column was originally published in the

Isi Leibler may be contacted at ileibler@leibler.com