-- indicators such as life expectancy, growth in imports, and electricity demand suggest that the Gazan standard of living is rising, not declining. 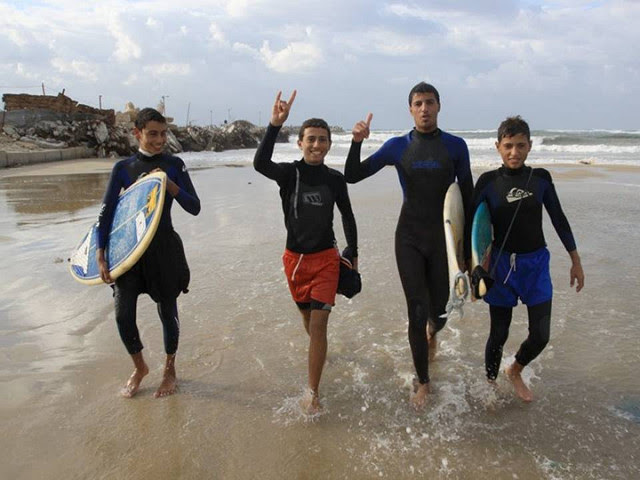 Surfers in Gaza, photo by proIsraeli via Flickr CC

EXECUTIVE SUMMARY: One of the most widespread myths about Gaza is that it is wallowing in poverty and forever on the verge of a humanitarian crisis as a result of the Israeli and Egyptian blockade. But indicators such as life expectancy, growth in imports, and electricity demand suggest that the Gazan standard of living is rising, not declining. If a genuine humanitarian crisis were to loom, the solution would be simple: disarm Hamas and divert its considerable expenditures on terrorism to the improvement of the welfare of Gaza’s inhabitants.

The internet and social media have made the creation, rapid dissemination, and perpetuation of myths a feature of political life. One of the most widespread is the myth that Gaza is wallowing in poverty and forever on the verge of a humanitarian crisis as a result of the Israeli and Egyptian blockade.

There is no shortage of compelling evidence to dispel this myth. Life expectancy, for example, is highly correlated with the good life. Japan, Singapore, and Norway lead the world in life expectancy. The bottom of the list contains countries in sub-Saharan Africa and Southeast Asia, for example Bangladesh.

The myth-makers would like you to think Gaza is also towards the bottom of the list, but it isn’t. Quite the opposite, in fact. Gaza’s life expectancy of 74 is above both the world average (68 in 2010) and the average in the Arab states. This means that more than 3.8 billion people are living shorter, and probably harsher, lives than Gazans.

The difference in life expectancy between Gaza and those at the bottom of the list is in fact quite staggering. Life expectancy in Angola, Sierra Leone, Somalia, Cote D’Ivoire, and other countries ranges from 50.1 to 55 years, according to the World Health Organization.

Were Gaza on the list, it would rank 86th out of 189 countries. That would place it alongside Paraguay and Samoa, hardly states that conjure images of abject poverty. But why resort to facts?

Perhaps, one might argue, life expectancy in Gaza is a quirk of fate. Or perhaps it is declining because of the blockade imposed on Gaza. The blockade was put in place because Hamas, the murderous terrorist organization that took over Gaza ten years ago, specializes in bombing buses full of Israeli citizens, fires missiles from hospitals (as the United Arab Emirates Red Crescent Society accused Hamas of doing), and launches assaults against Israeli civilian neighborhoods.

Reality check: life expectancy in Gaza has not declined, and the blockade no longer exists. Before the brief curtailment of goods into Gaza from Israel in 2007, 10,400 trucks laden with goods entered Gaza monthly from Israel (these figures are from OCHA, the bitterly anti-Israeli UN agency). In 2016, 14,460 trucks of produce crossed from Israel into Gaza per month, a 34.6% increase from before the imposition of the so-called blockade. This means the purchasing power of Gazans has not declined (taking into account demographic growth).

Even the electricity crisis in Gaza points to a high, and rising, standard of living. The crisis is partly the result of the gap between supply and increasing demand. According to Muhammad Abu Amarayn, the spokesperson of the Gaza Energy Commission, there is a need for 450 MW of electricity – way above the maximum of 280 MW that Israel, a local energy supply station, and Egypt collectively supply.

OCHA estimated peak demand in Gaza in 2010 at 280 MW. This means that if Abu Amarayn is correct, demand for electricity in Gaza has increased by 60% in six years. Economists often use energy demand as a proxy for economic growth in the absence of accurate macroeconomic data, as in the case of Gaza. Increasing demand for electricity suggests prosperity, not a humanitarian crisis.

So why is this myth so widespread? The answer lies with those who have a vested interest in perpetuating it. By far the most important of these is Hamas. The terrorist group taxes all incoming goods to pay the salaries of its 30,000 terrorists and the bureaucracy that feeds them, as well as for training, missile production, and the digging of tunnels into Israel.  The budget supports 20,000 more on the public payroll whom Hamas has hired since 2007 – mostly teachers who preach jihadism in Gaza’s public schools. Hamas hopes that claims of a humanitarian crisis will bring in more aid, more demand for goods, and a greater flow of goods, all of which it will tax for its own benefit.

Hamas is not the only culprit. The international “humanitarian” relief industry has an obvious stake in perpetuating the myth. In few places in the world can relief agency workers live in a cosmopolitan hive such as Tel Aviv, enjoy a world class symphony, museums, and night life, and commute to the allegedly stricken areas. In Zimbabwe, you’re stuck in Zimbabwe. Championing the humanitarian crisis in Gaza is to champion a personal lifestyle at the expense of East African countries that need the aid much more desperately than Gaza.

Even if the purported humanitarian crisis were in fact to loom, the solution is simple. According to the budget and expenditures for the 2013 fiscal year released by the last official Hamas government in 2014, a mere 2% of total expenditures of $348 million went to development and only 11.2% to social welfare transfers (compared to 25% in Egypt, which has a similar socio-economic profile). The rival PA estimates that over two-thirds of Hamas expenditures went to the production of terror.

The answer to any humanitarian crisis would be for the world community to join forces with the Palestinian Authority, Israel, and by now most of the Gaza inhabitants to force Hamas to dismantle its military infrastructure and spend its money on human welfare rather than terrorism.

The worst thing that can be done is to increase humanitarian aid before the disarming of Hamas, as many Israeli officials and politicians foolishly suggest. Putting the cart before the horse will backfire. It will result in more terrorism, more missiles, and more tunnels into Israel, which will in turn result in a massive Israeli response that will be borne by Gaza’s population, as were the last three bouts of conflict in the past decade.

To be humanitarian means disarming Hamas, pure and simple.


Prof. Hillel Frisch is a professor of political studies and Middle East studies at Bar-Ilan University and a senior research associate at the Begin-Sadat Center for Strategic Studies.