Yesterday, commerce secretary Wilbur Ross announced that the 2020 Census would add a question about citizenship. Shortly thereafter, California attorney general Xavier Becerra announced that he would sue to prevent this.

Yesterday, commerce secretary Wilbur Ross announced that the 2020 Census would add a question about citizenship. Shortly thereafter, California attorney general Xavier Becerra announced that he would sue to prevent this.

The inclusion of citizenship among the questions everyone must answer on the constitutionally mandated decennial census was hailed as a victory by Kansas secretary of state Kris Kobach:

"This is one of Trump's most important accomplishments as president," Kobach told Breitbart News in a late night interview. "This is right up there with Neil Gorsuch being appointed to the U.S. Supreme Court."
Kobach was one of the leading voices in the country for putting the citizenship question back on the Census, even writing Ross, himself, to request that the question be added to give the nation's citizens more transparency on how many noncitizens and illegal aliens are living throughout the country.
"It allows a sovereign nation to know how many citizens it has," Kobach told Breitbart News. "That's the craziest part of our Census since 1950. Now we will have an actual count of citizens. That's one of the most basic things a sovereign nation should be able to do, along with enforcing its borders."

Until 1950, the Census asked about the citizenship of respondents, and the reasons for dropping the question are unclear to me at this point. However, at that point in history, immigration had been severely limited for the preceding decades, so noncitizens were not a significant portion of the population. Subsequent laws expanding legal immigration and the toleration of illegal immigration have vastly increased the population of both categories of noncitizen residents.

One consequence of the lack of Census data is that we have no idea of the actual population of illegal aliens, which seems an obvious need that the new question will help address.

However, California A.G. Becerra contends that this historic question was always illegal, apparently: 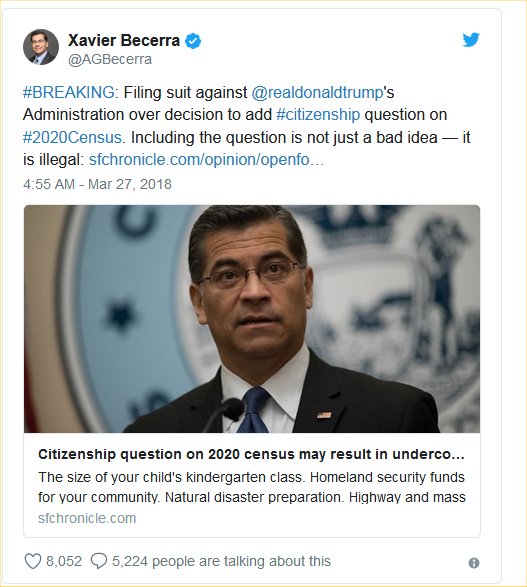 The San Francisco Chronicle article Becerra links to is credited to him and co-author Alex Padilla. In it, they provide no legal reasoning behind the contention that the question is illegal. They note that the Constitution speaks of enumerating "persons," but they do not explain why that makes it illegal to ask about citizenship.

It would discourage noncitizens and their citizen family members from responding to the census, resulting in a less accurate population count.

This is an opinion unsupported by any data or reasoning. They also lump together those who are legal immigrants with those who are illegally present in the United States in the category of "noncitizens."

They do say California would be adversely affected because:

California, with its large immigrant [sic] communities, would be disproportionately harmed by depressed participation in the 2020 census. An undercount would threaten at least one of California's seats in the House of Representatives (and, by extension, an elector in the electoral college.) It would deprive California and its cities and counties of their fair share of billions of dollars in federal funds.

Not only is there no support mentioned for this contention, but a new study from the Center for Immigration Studies contends that the effect would be minimal. It notes:

[The Census] Bureau has been asking more detailed immigration-related questions for many years on a number of its largest and most important surveys. For example, in addition to asking about citizenship, country of birth, and year of arrival, the CPS also asks each respondent for his or her mother's and father's birthplaces. Surveys like the CPS are the basis – and, in many cases, considered the gold-standard source – for official government estimates on everything from the nation's unemployment and poverty rates to wages and health insurance coverage. If asking about citizenship significantly reduced data quality by lowering response rates, then a good deal of information published monthly and annually by the federal government, based on these surveys, would already be compromised.

With California suing in federal court in that state, a rogue judge there could easily rule in its favor, with the Ninth Circuit Court of Appeals affirming such a decision in time to block the question from the 2020 census. An appeal to the Supreme Court most likely would be decided after that census, meaning that the progressives would get their way for another ten years.

Even so, the public needs to discuss the question of whether aliens, legal and illegal, deserve weight in apportionment of congressional districts and allocations of federal funds. The left is anxious to make any distinctions between citizens and noncitizens meaningless and to blur any distinction between legal immigrants and illegal aliens.