Though Russia has been gradually increasing its economic and military influence in Lebanon, it is unlikely that Moscow is prepared to irreparably compromise its relations with Israel. 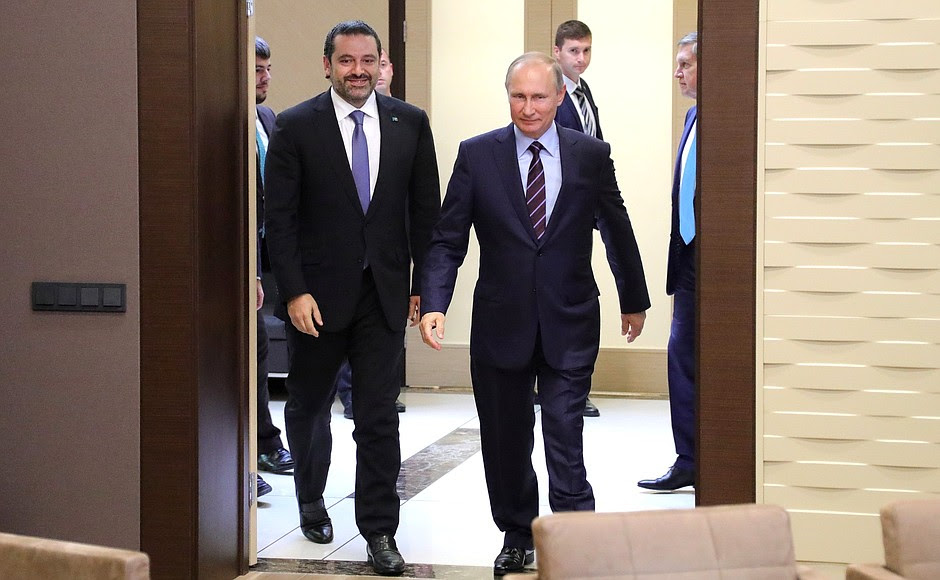 Saad Hariri and Vladimir Putin, photo via Office of the President of Russia

EXECUTIVE SUMMARY: Though Russia has been gradually increasing its economic and military influence in Lebanon, it is unlikely that Moscow is prepared to irreparably compromise its relations with Israel. Russia faces competition from other actors in Syria, and good relations with Israel can serve its interests there.

The Russian entrance into the Syrian battlefield in 2015 propped up the Assad regime. Moscow has continued to build up its military presence in the country: it has strengthened its bases on the Mediterranean shore, and recently received 49-year leases on Syrian airbase and port facilities. A Russian presence in Syria is thus projected well into the years to come, and by way of securing its long-term position there Moscow has carried out a string of active diplomatic moves in the neighboring countries, first and foremost Lebanon.

The Russian media has hinted at Moscow’s growing interest in this Mediterranean state by reporting on visits of Russian ships to Lebanese ports and disseminating rumors that Moscow will soon establish a military presence there. These leaks were partially corroborated when, on February 3, the Kremlin directed the Ministry of Defense to enter into an agreement with Beirut on increased military cooperation, including the use of Lebanese facilities by the Russian military. The two sides also agreed on a broader exchange of military information and intensive bilateral cooperation against terrorism.

The draft agreement is quite extensive. It involves joint training of troops, information and engineering support, military education and medicine, military topography, and hydrography. The agreement (which has yet to be signed) will be for a period of five years with automatic extensions for subsequent five-year periods.

A Russo-Lebanese military agreement would be a significant event. It would signal a major shift on Lebanon’s part, as its military has traditionally been oriented towards the West.

Russo-Lebanese military contacts have been somewhat mixed in the past. The Lebanese Armed Forces (LAF) possess Russian weapons, such as tanks and rifles, but in 2008 the LAF rejected Moscow’s offer of ten free MiG-29 fighters. So far, the LAF’s equipment is mostly American and European, including M60 and M48 tanks, M113 armored personnel carriers, and TOW antitank missiles. Under the last two US administrations, according to various estimates, $357 million in arms were sent to Lebanon.

For Russia, Lebanon’s geographical position on the Mediterranean – with its potential military facilities as well as proximity to war-torn Syria – makes it an attractive location from which to project influence. For Lebanon, Russia has turned into a potential guarantor of peace in Syria. Following the proposed bilateral agreement between Moscow and Beirut, Nabih Berri, speaker of the Lebanese parliament, called upon Russia to resolve the Syrian crisis: “I want to turn to Russia, which, along with the United States, is a great power; we cannot ask for this from the United States, but we ask Russia to help achieve a political settlement in Syria, which will be a major step toward the return of the Syrians to their homeland.”

Beyond the military significance, there is also an economic angle to greater Lebanese-Russian cooperation. Lebanon recently decided to begin exploiting its offshore Mediterranean natural gas reserves and offered exploration tenders to its seabed. Russian state companies, including Novatek, have expressed interest in tapping into Lebanon’s raw material resources, with the first exploratory to be drilled in 2019. This maritime resource exploration by Lebanon has reignited disputes with Israel over their maritime frontiers.

Lebanese-Russian cooperation will affect Israel as it is developing concurrently with an increase in Russia-Israel tensions following the February 11 Israeli airstrikes on Syrian-Iranian targets in Syria. These tensions could upset the status quo in which the Kremlin tolerates Israel’s preventive strikes on Syrian soil.

However, from a Russian geopolitical perspective, it would be unwise to risk a deterioration of relations with Israel at this moment because Russo-Israeli tensions in Beirut could negatively affect Russo-Israeli contacts in Syria. Such tensions could prompt Israel to be more open to a future military engagement in Syria, a scenario that could spiral entirely out of Russian control. Moscow does not need that complication as its efforts to maintain a dominant posture on the Syrian battlefield have already been shaken.

The Turkish operation in Afrin, in northern Syria, made clear that Moscow is unable to forestall the growth of Ankara’s influence. Iranian proxy forces are now close to the Israeli border, and Russia failed to accomplish anything significant on this matter at the Sochi Conference in late January. Moreover, according to some reports, Russian mercenaries were killed by the hundreds by US forces, diminishing Russian prestige in and around Syria.

Thus, while Russia and Lebanon are experiencing an uptick in economic and military relations, this development could endanger Moscow’s relations with Jerusalem. Russia does not wish to completely alienate Israel at a time when the Kremlin’s position in Syria remains vulnerable. The last thing Moscow wants is a more robust Israeli engagement in Syria.